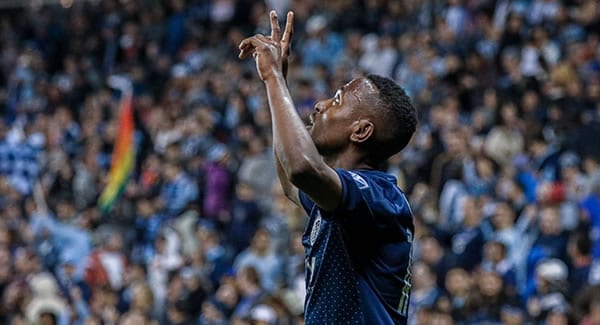 (Soccer lines available at Bookmaker - One of oldest and most trusted books on the web! 50K bets!)

Two offensive-minded sides try to open up what has been a low-scoring tournament at the time of this writing, as just five goals have been scored in the first four matches. Goals shouldn’t be a problem in this matchup, as Minnesota comes to Disney as the highest-scoring team in MLS, scoring eight goals in its first two matches. But Sporting has been just a step behind, putting home seven in their first two matches and looking very good doing it.

If these teams can pick up where they left off in March, this has the potential to be one of the highest-scoring games in the group stage. But can they overcome the heat in their first match back?

Minnesota finally saw some success last season, reaching the postseason for the first time as an MLS side. But the Loons won’t come to Disney intact, as top defender Ike Opara did not make the trip south because of an injury that hasn’t healed in time for him to participate in this tournament. Without him, Minnesota might be hard-pressed to keep goals out of the net.

However, that might not matter if Luis Amarilla can keep up his torrid start to the season. Amarilla, who came over from Paraguay, has already scored two of the Loons’ eight goals and proven to be the striker that Adrian Heath’s team needed. If the midfield can offset the loss of Opara, Minnesota could be in the mix for one of the top two spots in the group.

Sporting isn’t used to missing the playoffs, as they hadn’t done so since 2010. So they decided to do something about it, bringing in Alan Pulido from the Mexican league and Gadi Kinda from Israel. So far, the pair have paid excellent dividends for Peter Vermes’ side, scoring a pair of goals each in SKC’s first two matches of the year.

Making matters even better for Sporting is that they seem to have patched up their leaky defense from a season ago. Last year, Sporting didn’t win a single match after the end of August, and the defense was a major reason why. Over its final six games, every opponent Sporting faced left with at least two goals, including Los Angeles Galaxy and FC Dallas, who scored seven and six, respectively. When all was said and done, Sporting finished 2019 with 67 goals conceded, worst in the Western Conference. If SKC is going to do anything in this tournament, it must be stronger at the backline. So far, the results have been encouraging, as they’ve conceded just one goal in two matches.

These are high-scoring sides, and I think they’re coming into this match pretty equal. I think there’s enough here to expect both teams to score, and I’ll pair that with a draw in order to get positive money. At +310, there’s plenty of value in taking a score draw.

I think the over is also a good play in this matchup. The MLS tournament has featured teams struggling to get going in the heat, but these are veteran teams that should be able to adjust and play their style of soccer. I don’t trust the Loons’ defense without Opara, and I don’t believe that Sporting’s defense has improved enough to keep Minnesota from finding a goal or two. I can see this match having four goals in it, and a bet of over 3.5 at +130 is solid value from my perspective. Bet your MLS soccer picks for FREE this week by taking advantage of a massive 100% REAL CASH bonus at MyBookie Sportsbook! Simply deposit anywhere from $100 to $300 and they’ll match your deposit amount with free money! You must sign up through this link and use bonus code/promo code PREDICT100.

It’s a risk given how much the weather has dominated this tournament so far, but I don’t trust either defense to get the job done here. I think both teams have quality strikers, and Pulido and Amarilla regularly ply their trade in Mexico and Paraguay respectively, both of which are hotter and more difficult to play in than Florida.

I don’t think the weather will affect these teams much. I think there’s a lot of value in taking this match to finish 2-2 at +1100.