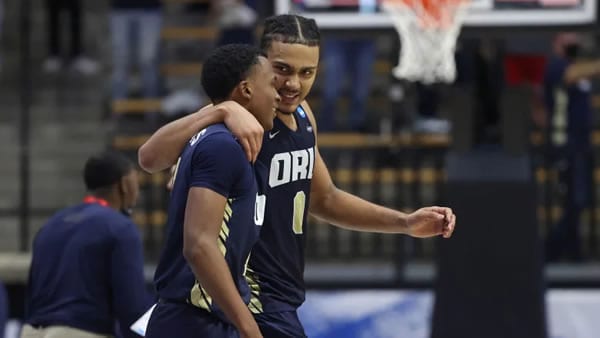 It’s rare that the NCAA tournament gives us a regular-season rematch between two teams who aren’t in the same conference, but that’s precisely what we’ve got in this battle between Arkansas and Oral Roberts. These teams played back in December in a game that should have been a sign of things to come, as the Razorbacks found themselves down 10 points at halftime before turning the game around and dropping 57 on the Golden Eagles in the second half.

Both teams can say that they’re a lot better now than they were on that day in Fayetteville, but Vegas is thinking this is going to look almost exactly like that game did, as it’s got the Razorbacks winning by the exact same margin they did three months ago. Oral Roberts has been leading a charmed life in the postseason, as its past four wins have all come by three points or less. Do the Golden Eagles have one more shocker in them, or can the Razorbacks make it back to the Elite Eight for the first time since their 1995 trip to the championship game?

Max Abmas and Kevin Obanor didn’t come out for a minute against either Florida or Ohio State, and the Golden Eagles needed everything that both of them could offer. Abmas actually hasn’t come out of a game since the Summit League tournament began, playing in every second of the Golden Eagles’ past five contests.

That’s not unusual for Abmas, as he’s played every minute in 14 of the last 16 games that Oral Roberts has played. However, there’s a worry here because when they played the first time against Arkansas, Abmas ended up scoring just 11 points because he had to exit with foul trouble. If the Golden Eagles do have to pull either one off the floor, they’re in real trouble because nobody else showed any propensity for scoring against the Gators. The two scored 54 of the Golden Eagles’ 81 points, meaning the rest of the team only managed 27 points. If either one gets shut down, there’s no way Oral Roberts can stay with Arkansas without someone else stepping up.

This has to be Justin Smith’s game, and it needs to be that from the opening tip. In the second half, the Golden Eagles had no answer whatsoever for Smith, who ended up with 22 points and 17 rebounds, including ten offensive boards. Smith’s play was a big reason why Arkansas ended up with 58 rebounds against Oral Roberts, and the Golden Eagles likely don’t have anyone who can match up to him in the paint with how well he’s playing now.

While Smith has dominated inside, Moses Moody has been far more inconsistent. He hasn’t played poorly in Indianapolis, but he hasn’t been anywhere near as effective as he was against LSU in Nashville when he scored 28 points in a loss. In two games in Indianapolis, the freshman has shot well but hasn’t shot much, scoring a combined 27 points in two games. However, Arkansas has played defense so well that the Razorbacks have been just fine without Moody taking over the game. As long as Smith is controlling things inside and the Razorbacks don’t allow easy baskets, they’re in great shape.

Oral Roberts will Cover If:

The Golden Eagles can hit from the outside. Oral Roberts has to be able to take advantage of the one thing Arkansas is willing to give it: perimeter shooting. The Razorbacks are happy to let teams fire away from beyond the arc, but they’re not going to give up much of anything from inside 22 feet. The Golden Eagles didn’t shoot it well from behind the arc against Florida, and they’re going to have to be better than 10-for-30 from deep to have a chance. Arkansas almost certainly won’t let Oral Roberts shoot 59 percent from inside the arc the way Florida did, so either the 3-pointers fall, or the Golden Eagles will.

The Razorbacks remember what worked the first time and stick with it. Justin Smith was the best player on the floor by a mile in that game against Oral Roberts, but it took a half before Eric Musselman’s crew started attacking the paint and forcing Oral Roberts to respond. Arkansas won the second half by a staggering 57-36, and unlike the Golden Eagles’ first two opponents, the Razorbacks shouldn’t have to spend a half figuring out what works because they already know what they can do to Oral Roberts.

This number is too high. Yes, I know that these teams combined to score 163 in Fayetteville, but Arkansas clamped down on Oral Roberts in the second half and has been doing the same thing to strong offenses throughout this tournament. The Razorbacks have improved a lot on defense since that game, but the total is saying 159 for this one. I don’t see that happening unless Arkansas really gets off and running to the extent that it loses interest in defense.

Oral Roberts has had a dream run in this tournament, but the Golden Eagles are now facing a team who knows exactly what they do, saw for itself what can happen when it fails to take the Golden Eagles seriously, and is far more talented than just about everyone they saw in their own conference. This has been an incredible story for the school in Tulsa, but the run ends here against an opponent that isn’t going to take the Golden Eagles lightly for even a possession. Give me the Razorbacks. Question: Did you know that you can bet on games LIVE in-progress at any time? Some bookies offer in-game betting, but at Bovada Sportsbook, you can jump in literally any time and wager on the point spread, money line and total! Click here to register and start having a BETTER wagering experience TODAY! They give you a 50% bonus too! Credit cards work there!