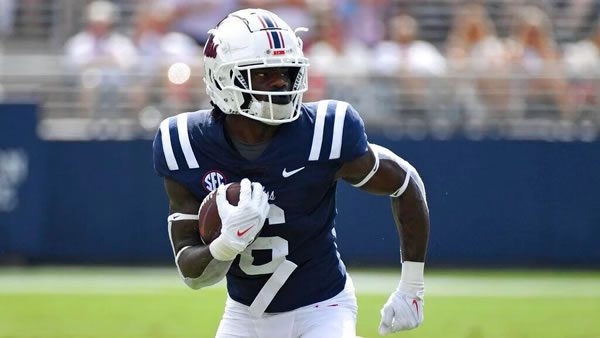 The Ole Miss Rebels improved to 6-0 SU last week with a 52-28 victory over the Vanderbilt Commodores. While the final box score may appear to indicate a blowout victory, the Rebels actually trailed 20-10 deep into the first half. However, the Rebels potent offense provided too much firepower, which was headlined by WR Jonathan Mingo, who recorded two 70-plus yard touchdown receptions. In the end, Vanderbilt’s offense simply could not keep pace, and the Rebels will be looking to flex the same offensive firepower again this Saturday when they host the Auburn Tigers at Vaught-Hemingway Stadium.

The visiting Tigers are on the heels of a thumping at the hands of Georgia, which resulted in a 42-10 defeat. For the 4th consecutive game, the Auburn offense failed to crack the 20-point threshold. In that timeframe, the Tigers have dropped three of their last four games and are now hovering at the .500 mark on the season. While things have not been going well on the Plains in 2022, the Tigers will look to get back on track on Saturday against one of their top rivals in Ole Miss. Despite the struggles in recent years, Auburn has found a way to win six straight over the emerging Rebels, and the Tigers will be getting a generous 15.5 points for this Saturday’s meeting in Oxford.

The Auburn Tigers have been pretty pathetic this season on the offensive side of the football. The Tigers rank 94th in total offense averaging just 367 yards per game. Last week, I strongly questioned Auburn’s potential to break their trend of horrific offensive performances against the top defense in college football and yet again it was ugly performance with QB Robby Ashford hitting just 13 of 38 passing for 165 yards with a score. Ashford has been starting for QB TJ Finley who remains sidelined with a shoulder injury. However, neither quarterback has shown any ability to give Auburn a threatening presence in the passing game.

In this week’s match-up against Ole Miss, Ashford should have better opportunities against a much weaker defense. However, the key for the Tigers will be the ground game with Ashford and RB Tank Bigsby. If Auburn can control the ground game and control the football, it will help their chances of competing. If Auburn fails to control the clock, I’m confident the Rebels will be able to pull away with a superior offense and the chances of that happening will increase with the number of possessions this game yields. Therefore, it is absolutely critical that Auburn is able to run the football and keep the Rebels’ offense on the sideline in order to keep this game within reach.

Head Coach Lane Kiffen has produced an extremely fast tempo and talented offense in Oxford that is capable of big scoring numbers just like we witnessed last week against the Commodores. While the Rebels tempo and quick striking ability is exciting to watch, it does not guarantee that every game is a high scoring affair. Instead, Ole Miss has actually hit the “under” in 12 of the last 14 games. The trend on the “under” also includes 7 of the last 8 games against SEC opponents. The Rebels defense has been playing well this season with a shutout against Georgia Tech and another tough 22-19 victory against no. 7 Kentucky just two weeks ago. In a very good match-up this week, don’t be surprised if the Rebels defense plays an important role towards another “under” narrative yet again.

I don’t have a strong opinion on the betting side for this match-up. However, I do believe the Auburn run game will force a slower game pace. I have confidence the Rebels defense matches-up well against Auburn. Likewise, I believe Auburn’s defense is getting a little disrespected from this total. Therefore, I’ll take the sharper play here and back both defenses.

Jay’s Pick: Take the under 54.5. Did you know that you could be wagering on games at -105 instead of the more expensive -110 option that you’re laying? Why pay more for the very same product? Be wise! Save money everytime you bet by wagering at discounted betting odds at BetAnySports Sportsbook!