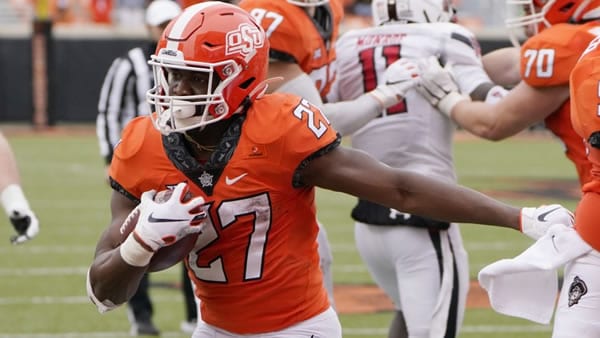 The Big 12 battles the ACC when Oklahoma State and Miami play in the Cheez-It Bowl on Tuesday evening in Orlando. The Cowboys started well this season but struggled through the second half, falling out of contention in the ACC. The Hurricanes, meanwhile, only lost twice this season, but when they lost, it was ugly. OSU is lined as a short favorite for this game; who do we like for our free college football bowl betting pick?

College football bowl betting odds opened Oklahoma State at -2.5 over Miami, with an over/under of 59.5. Early betting action then edged that total down to 59.

According to Sagarin’s ratings at USAToday.com, the Cowboys should be favored by 3.5 points for this bowl.

Oklahoma State started 4-0 this season and thought it had an excellent shot at making the Big 12 championship game. But a 2-3 stretch, which included losses to Texas, Oklahoma, and TCU, put an end to those hopes. The Cowboys recently concluded their regular season with a 42-3 romp over Baylor back on Dec. 12.

OSU played its last three games without star RB Chuba Hubbard, and he’ll miss this bowl game, too, as he prepares to move on to the NFL. But his absence didn’t seem to matter too much, considering the Cowboys ran the ball for an average of 242 yards over their last three contests.

Oklahoma State out-gained Baylor in that season finale 608-156 and out-rushed the Bears 261-70. But prior to that, the Cowboys had been out-gained by each of their previous four opponents and out-rushed by three of those four foes.

Miami, meanwhile, started 3-0 this season before losing badly to Clemson. The Hurricanes then won five more in a row, beating nobody of note, but then ended their regular season with a thud, losing to North Carolina 62-26 back on Dec. 12.

Miami got gouged for a ridiculous 778 yards of total offense by the Tar Heels, including 554 on the ground!

However, prior to that debacle, the Hurricanes had out-gained each of their previous five opponents.

Miami won five in a row from mid-October into December, although three of those victories came by a total of nine points. So the Hurricanes had been living a bit dangerously, heading into that North Carolina game.

The Hurricanes will play this bowl without both starting defensive ends, Jaelan Phillips and Quincy Roche, who are opting out like Hubbard, heading for the NFL.

Sagarin’s ratings rank the Big 12 as the No. 2 conference in college football this season, with the ACC Coastal Division, Miami’s home, coming in at No. 8.

These programs have met just once previously, a 40-3 Hurricanes victory back in 1991

Unders are 7-3 in Oklahoma State games this season, which are averaging 52 total points.

Totals are split 5-5 in Miami games this season, which are averaging 60 points.

Miami might own a slight edge on offense, but Oklahoma State owns the better defense. And we love betting on the better defense in bowl games. Did you see what North Carolina did to that ‘Canes D? Also, Miami might be a little too reliant on QB King, who leads the team in rushing attempts this season, while the Cowboys have shown they’re more than just Hubbard offensively. We like Oklahoma State here, giving the short spread. Question: Did you know that you could be wagering on games at -105 instead of -110? Kick your New Year off right by making the switch to cheaper betting odds at BetAnySports! You’ll be so glad you did!