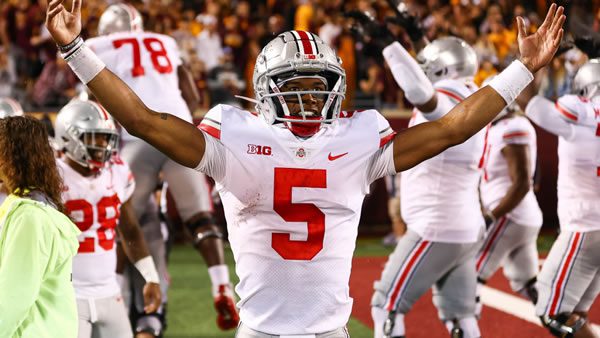 Coming off a rather shocking home loss last week to Oregon, the Ohio State Buckeyes look to bounce back this week when they host the Tulsa Golden Hurricane for another non-conference bout Saturday afternoon at the Horseshoe. The loss to the Ducks put a temporary dent in the Buckeyes hopes to make the College Football Playoff, but this week they get a Tulsa team that lost to an FCS outfit earlier this season.
Ohio State is favored by better than three touchdowns for this one; who do we like here for our free Week 3 college football pick?

Week 3’s college football betting lines opened Ohio State at around -26, with an over/under of 61. Early betting action then dipped that spread a point and a half to -24.5.

The Hurricane are 0-2 on this young season after falling gamely at Oklahoma State last week 28-23. Tulsa fell behind to the Cowboys 7-0 late in the second quarter but used an interception return for a score to take a 7-7 tie into halftime. The ‘Cane then scored the first seven points of the second half, later led 17-14 but fell down for good when they allowed a 98-yard kick-off return for a touchdown with 10 minutes left. In the end, Tulsa couldn’t get the ball back, as OSU ran the last three minutes off the clock.
But the Hurricane hung on for the cover as 10.5-point dogs.

Tulsa out-gained Oklahoma State 347-313 and won the time of possession 32:28. But the Hurricane also settled for a field goal from a key 1st-and-goal situation in the fourth quarter, and that ensuring special teams failure really hurt.

The Hurricane opened this season with a 19-17 loss to FCS Cal-Davis. Tulsa led that game in the fourth quarter, too, but gave up the last six points and went down outright as a three-touchdown favorite.

The Golden Hurricane returned 18 starters this season, ten on offense and eight on defense, from a team that played 6-3 last season, lost the AAC championship game to a very good Cincinnati team by a field goal, then lost a bowl to Mississippi State by two points. So this team is no pushover.

The Buckeyes, meanwhile, are also 1-1 after losing at home to Oregon last week 35-28. Ohio State fell behind to the Ducks 7-0 early in the second quarter and trailed 14-7 at the half. The Buckeyes then gave up a 77-yard Oregon touchdown on the opening drive of the second half and never recovered from there. Late in the game, still down by seven, Ohio State drove to midfield but threw an interception to finish off an outright defeat as a 15-point favorite.

The Buckeyes out-gained the Ducks 612-505 but got out-rushed 269-128.
Ohio State opened its season with a 45-31 victory at Minnesota, but it trailed that game in the third quarter and eventually gave up 203 of Gophers rushing yardage. So at the moment, that Buckeyes defense is a concern.

OSU only returned ten starters this season, six on offense and four on defense, from a team that played 7-1 last year, won the Big Ten again and beat Clemson in a bowl but lost to Alabama in the national championship game. The Buckeyes are still huge favorites to win the Big Ten again this season but certainly don’t seem to be invincible.

This game will be the second meeting between these two programs; back in 2016, Ohio State beat Tulsa 48-3 and covered at -28.

Tulsa is a much better team than that loss to UC-Davis might indicate and could have beaten Oklahoma State. Meanwhile, we’re wondering about that Ohio State defense. Yes, the Buckeyes are almost certainly going to win this game, but we like the Hurricane plus the points this weekend! Bet this game and ALL your Week 3 college football picks for FREE by taking advantage of a 100% REAL CASH bonus on your first deposit of $100 to $1000 at BetNow Sportsbook!