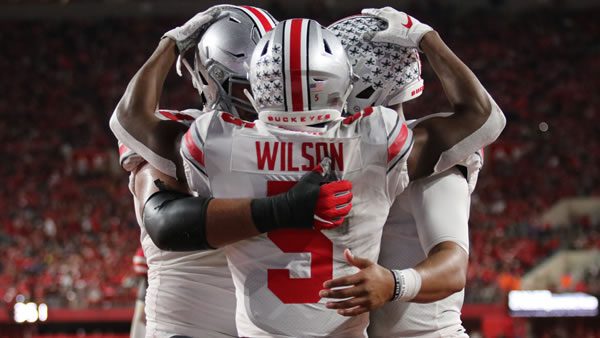 Ohio State delivered a dose of reality to Rutgers last week, while Maryland received one from Iowa. So the Buckeyes and Terrapins, both 4-1 on the season, enter Saturday afternoon’s Big Ten East bout at the Horseshoe from different directions.

Ohio State absolutely owns the “rivalry” with Maryland, and it’s favored by three touchdowns for this one. Which way are we going here with our free college football betting pick?

This week’s college football betting lines opened Ohio State at -20 over the Terrapins, with an over/under of around 68. Early betting action then bumped the Buckeyes to -21, and that total to 69.5.

The Terrapins started 4-0 this season, with wins over West Virginia and Illinois, but received took a tough dose of reality last Friday in the form of a 51-14 home loss to Iowa. Maryland led that game 7-3 after one quarter but gave up a 41-0 Hawkeyes run spanning the halves, on its way toward a very bad loss. The Terps also whiffed terribly against the spread as three-point home dogs.

Maryland got out-gained by Iowa 428-271, lost time of possession by a 39:21 split, and turned the ball over seven times, as QB Taulia Tagovailoa, who threw one interception through the first four games, tossed five picks

The Terps opened this season with a 30-24 win over the Mountaineers, then beat FCS Howard 62-0, then won at Illinois 20-17, then beat Kent State 37-16. Maryland probably isn’t going to win at Ohio State, but after that, it’s got at least four winnable games yet to play. So the Terps look like they’ve got a good chance to return to a bowl for the first time in five seasons.

The Buckeyes, meanwhile, are also 4-1 on the season after winning at Rutgers last week 52-13. Ohio State, favored by 15 points, led 24-0 before the first quarter was over, 45-6 at the half and 52-6 through three quarters, on its way toward the easy victory and cover.

The Buckeyes, with CJ Stroud back at quarterback following a one-game absence, out-gained the Scarlet Knights 541-346, out-rushed Rutgers 208-111, and won the turnover battle 3-0.

Ohio Stare opened this season with a 45-31 win at Minnesota but actually trailed in the third quarter of that game. The Buckeyes then lost at home to Oregon 35-28, then beat Tulsa 41-20 in a game that was closer than that final score might indicate. But now, with a 59-7 win over Akron two weeks ago, Ohio State has won its last two games by a total score of 111-20 and covered two spreads in a row.

The one-loss Buckeyes are still in the hunt for a spot in the College Football Playoff, but they’ll probably have to win out from here, and style points might come into play.

On the personnel front, Maryland took a hit last week with the loss of WR Dontay Demus (three 100-yard receiving games this year) for the season to a knee injury.

The Buckeyes are 6-0 SU, 4-2 ATS in the series against the Terps, all games played since Maryland joined the Big Ten in 2014. And OSU won those games by an average score of 58-22. Most recently, two seasons ago, the Buckeyes beat the Terrapins 73-14, covering at -43.

Unders are 3-2 in Terps games this season, which are averaging 54 total points.

Overs are 3-2 in Buckeyes games this season, which are averaging 66 points.

Overs are a perfect 6-0 over the last six Maryland-Ohio State games, which have averaged a very healthy 79 points.

The average score of an Ohio State-Maryland game over the last six meetings is 58-22, and the Buckeyes are going to win this game, too. However, this might be the weakest OSU team over that span, while the Terps might have their best team during that time. We expect Maryland to bounce back a bit from last week and put up 24-28 points, which would offer an excellent chance at the cover. We don’t see an upset, but we’re taking the Terps and the points. Bet your week 6 college football picks for FREE by taking advantage of a 100% REAL CASH bonus on your first deposit of $100 to $500 at GTBets!