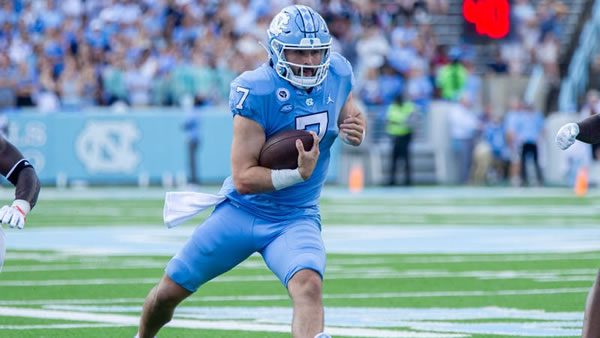 Notre Dame’s Fighting Irish, still harboring faint hopes of making the College Football Playoff, meet up with a disappointing North Carolina team Saturday night in South Bend. Notre Dame is 6-1 on the season, winning several close games. The Tar Heels, meanwhile, are 4-3, after starting this season in the Top 10.

The Irish are favored by three and a hook here; who do we like here for our free college football betting pick?

This week’s college football betting lines opened the Irish as four-point favorites over the Tar Heels with an over/under of right around 62.5. Early betting action then dipped that spread to -3.5.

Any bettors out there thinking North Carolina might win this game outright could get upwards of +155 on the college football betting money line.

The Tar Heels are 4-3 on the season after beating Miami two weeks ago 45-42. Carolina then had last week off.

The Heels scored touchdowns on four of their first six possessions against the Hurricanes and led 31-17 at the half. UNC then allowed Miami to get within 38-34 in the third quarter and 45-42 with three minutes to go but came up with a turnover inside its own red zone in the waning moments to secure the much-needed victory. However, North Carolina came up short against the spread as a 7.5-point favorite.

So on the season North Carolina has out-gained and out-rushed five of its seven opponents.

At 4-3 overall, the Heels need two wins over their last five games to become bowl-eligible, but they’ve got tough ones coming up against Wake Forest, Pitt, and North Carolina State. So nothing’s been written yet.

The Irish, meanwhile, are 6-1 on the season after beating USC last week 31-16. Notre Dame scored the first 10 points of the game and led 17-3 at the half. The Irish then scored the first seven points out of the locker room, let the Trojans get within 24-16 midway through the fourth quarter but tacked on one more score to ice the victory and the cover as 7.5-point favorites.

The Irish have now actually been out-gained four times in their last five games.

At 6-1 and ranked No. 11 in this week’s Coaches Poll, Notre Dame may still have an outside shot at making the CFP. But they’ll have to win out, probably impressively, and get some help from elsewhere.

These teams met most recently last season in Chapel Hill, a 31-17 Irish victory. That game was tied at 17-17 well into the third quarter, but Notre Dame scored the final 14 points and covered at -4.5.

Also, that game played way under a total of 69.

Overs are 4-3 in Tar Heels games this season, which are averaging 66 total points.

Overs are 4-3 in Irish games this season, which are averaging 54 points.

Notre Dame is 6-1 but hasn’t exactly been blowing foes out. Three of its wins have come by exactly three points, and three other games were one score in the fourth quarter. Plus, the quarterback play doesn’t impress us. Meanwhile, North Carolina’s been a disappointment so far this year, but we still feel they’re better than what they’ve shown. If they could just get a little better play on defense, the Heels might be dangerous. We see another close game here for the Irish, and 3.5 points might come in real handy. So we’re taking the points with North Carolina. Recommendation: Take 2 minutes to read this article on wagering on games at reduced odds. It’ll save you THOUSANDS of dollars for doing what you’re already doing!