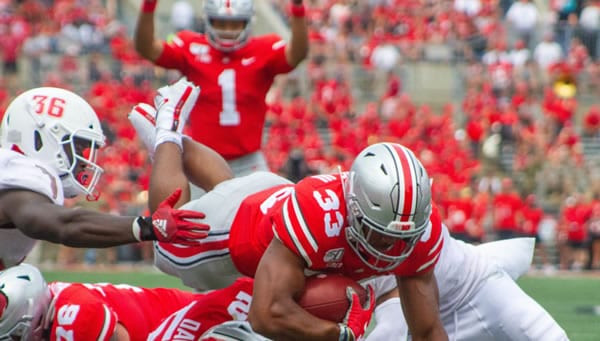 Ohio State restarts its quest for a Big Ten title and a berth in the College Football Playoff when it meets Michigan State Saturday afternoon in East Lansing. The Buckeyes are coming off an unexpected off week, thanks to a virus situation, while the Spartans are coming off an upset of Northwestern. Big bad Ohio State is favored by better than three touchdowns for this game; what’s our play with our free college football pick?

College football betting odds opened Ohio State at -22.5 over Michigan State, with an over/under of 59.5. Early betting action then bumped the Buckeyes a point, to -23.5.

The Buckeyes reached 4-0 on the season with a 42-35 victory over a nice Indiana team two weeks ago. Ohio State then had last week’s scheduled game against Illinois canceled.

The Buckeyes drove their first possession of the game 75 yards in two plays to a touchdown two weeks back, allowed the Hoosiers to tie the score at 7-7 early in the second quarter but used a 21-0 run to take a 28-7 lead into halftime. Ohio State then scored the first seven points out of the locker to go up 28 and hung on from there for the win.

However, OSU took its foot off the gas, allowed Indiana to score two fourth-quarter touchdowns, and missed out on the cover as a 21-point favorite.

Ohio State out-gained the Hoosiers 607-490, and over half the yardage the Buckeyes defense gave up came in prevent mode. OSU also ran the ball for 307 yards while holding Indiana to -1 yards on the ground and won the time of possession by a 36:24 split.

The Buckeyes have now out-gained each of their four opponents this season by at least 117 yards, and they’ve out-rushed all four foes.

At 4-0 overall, the Buckeyes can clinch a spot in the upcoming Big Ten championship game with victories this week and next week against Michigan. They’re also still chasing a spot in the College Football Playoff.

Michigan State, meanwhile, just snapped a two-game losing skid with a 29-20 win over previously undefeated Northwestern last week. The Spartans, playing as two-touchdown home dogs, scored the first 17 points of the game and led 17-6 at the half. MSU then gave up the first 14 points of the second half to fall behind 20-17 but kicked a pair of field goals to re-take the lead, then added a defensive score on the game’s last play to secure the upset.

Michigan State has now out-gained only two of its five opponents this season and out-rushed just one of five foes.

At 2-3 overall, Michigan State needs a win this week and another next week over Penn State to even be considered for a bowl bid.

Ohio State owns a four-game winning streak in the rivalry with Michigan State, going 3-1 ATS in the process, winning the last three meetings by an average score of 36-6. Last year the Buckeyes led the Spartans 27-10 at the half, won 34-10, and covered at -20.

Also, that game played under a total of 51.

Overs are 2-1-1 in Buckeyes games this season, which are averaging 71 total points against an average over/under of 68.

Overs are 3-2 in Spartans games this season, which are averaging 49 points against an average O/U of 46.

Unders are 5-0 over the last five meetings between these teams, mostly because Ohio State has held Michigan State to about 10 points per game over that span.

Back in October, Michigan State “upset” rival Michigan at the Big House; the following week, the Spartans suffered a huge letdown and got their butts kicked by Iowa. Last week MSU pulled an upset over Northwestern; we expect another letdown by the Spartans this week. We’ll give the points here with Ohio State. If you’re a college kid betting games every week you GOTTA be gobbling up every single edge you can get! You old guys too! So STOP overpaying for odds! STOP laying -110 on games! Start laying only -105 at BetAnySports! Make the switch! You’ll be so glad you did!