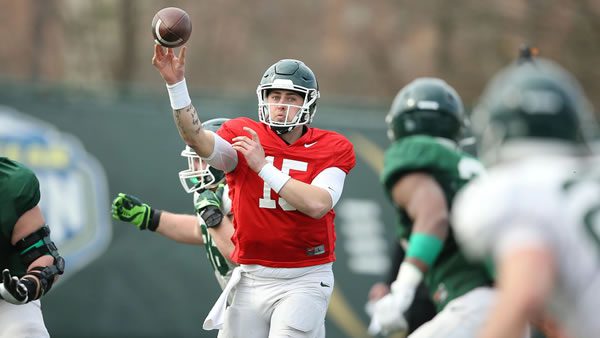 The Northwestern Wildcats, coming off a Big Ten division title last season, and the Michigan State Spartans, coming off a bowl-less season, open their 2021 campaigns and their Big Ten slates Friday night, Sept. 3, in Evanston. Northwestern just keeps rolling along under Coach Fitzgerald, but he’s got holes to fill this year. Michigan State, meanwhile, enters its second season under Coach Tucker, its first with the benefit of spring practice.

The Wildcats are favored here but only by the standard home-field advantage. How are we playing this game with our free college football betting pick?

The college football betting lines opened Northwestern as a four-point favorite for this game, with an over/under of around 45. Early betting action then dipped that spread to -3.

The Wildcats could also be found giving around -165 on the college football money line, with Michigan State getting +145 to win this game outright.

The Spartans return 16 starters this season from a team that played 2-5 last season. Michigan State opened last season, its first under Coach Tucker, with a home loss to Rutgers, then upset the hell out of rival Michigan at the Big House 27-24 as a 22-point underdog. The Spartans then suffered two weeks’ worth of letdowns with losses to Iowa and Indiana but then upset Northwestern 29-20 as 13-point dogs. MSU then finished with losses to Ohio State and Penn State and missed a bowl for only the second time in the last 13 seasons.

Nine starters are back on offense for the Spartans this year, including almost all the skills people and the entire offensive line. And while they lost three-year starting QB Rocky Lombardi, they added senior transfer Anthony Russo, who started 26 games for Temple. And seven starters are back on defense for MSU, including five of last year’s top six tacklers.

Michigan State averaged just 330 yards per game on offense last year while allowed 397 YPG, but we expect the Spartans to improve upon both those figures this season.

Also, MSU posted a -9 turnover ratio last season, but we expect a stat like that to reverse itself over the course of the next season or two.

The Wildcats, meanwhile, return only eight starters this season, fewest in the Big Ten, from a team that played 7-2 last year, lost the Big Ten championship game to Ohio State but beat Auburn in a bowl. Northwestern started 5-0 last year, with wins at Iowa and over Wisconsin, but then produced a stinker of a loss at Michigan State. The Wildcats then beat rival Illinois to secure a spot in the Big Ten title tilt, where they fell to the Buckeyes 22-10 but covered as 18-point dogs. Northwestern then beat Auburn 35-19 in a bowl to cap off an excellent rebound season after going 3-9 in 2019.

Northwestern averaged 361 YPG on offense last year while holding foes to 341 YPG on defense, but we won’t be surprised if the ‘Cats take a step back on both those figures this season.

The Wildcats beat the Spartans four out of five times from 2012-18, but Michigan State is 2-0 both SU and ATS over the last two meetings. Last year the Spartans, as 13-point home dogs, upset Northwestern in East Lansing 29-20.

Michigan State jumped out to a 17-0 lead on the ‘Cats last year, only to have Northwestern score the game’s next 20 points to lead 20-17 early in the fourth quarter. But the Spartans then scored the final 12 points of the game, the last six on a recovered fumble in the end zone on the previous play of the game.

Also, that game played over a total of 40.

The Under cashed 7-1 in Wildcats games last season, which averaged 40 points.

Overs are 5-0 over the last five meetings between these teams, even though the previous four meetings have only averaged (without overtime) 43 total points.

Michigan State only won two games last year but played a tough schedule, beat Michigan and Northwestern, and had Penn State down 21-10 at the half before fading. Now, unlike last year, Coach Tucker has had an off-season worth of practices to get more familiar with his new team. We can see the Spartans returning to a bowl this season. Northwestern, meanwhile, lived a bit of a charmed life last year, producing 25 points per game on 361 YPG, and now only returns eight starters. Last year only one team in the country, LSU, returned as few as eight starters; the defending national champs played 5-5. We don’t like going along with the betting flow, but we’re taking Michigan State here for the outright victory. Where are you betting your college football picks this season? Does your book offer you the ability to bet on games at reduced odds? NO he doesn’t! Stop pissing away your hard earned money and start saving big money TODAY by making the switch to -105 odds sides and totals at BetAnySports! You’ll be so happy you did!