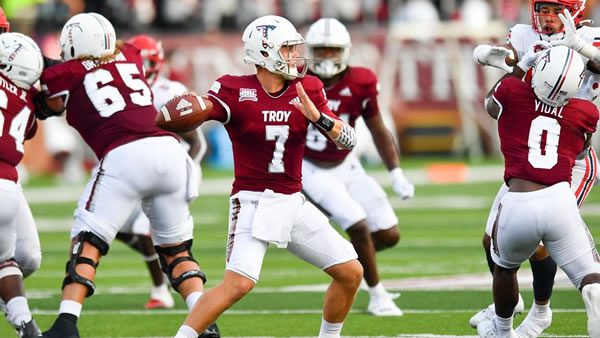 It turns out that a schedule where the most explosive offense you see for six games is Buffalo isn’t really great preparation for facing even the better teams of the Sun Belt, as Coastal Carolina couldn’t get a hold of Appalachian State’s offense and likely knocked itself out of the race for the Sun Belt title game. The Chanticleers have only lost once in the league, but the same is true of App State, and nothing suggests the Mountaineers are going to lose again against a weak closing schedule.

That begs the question of whether Coastal will have the motivation needed against a Troy squad that will be plenty motivated and has done a great job of staying in every game it’s played in 2021. The only game they lost by more than 10 points was a 29-16 defeat at Louisiana-Monroe, and the Trojans were competitive against South Carolina and Liberty. Plus, they’ve shown that they can hang with Coastal in past seasons, as they lost by one point in their last visit to the Surf Turf in 2019 and fell by four last year.

A win would be huge for Troy, as Chip Lindsey has fallen one win short of a bowl bid in each of his first two seasons with the Trojans. With Coastal, Louisiana, and App State still on the schedule for the Trojans, Troy is going to have to beat at least one of the Sun Belt giants to guarantee its participation in a bowl game. With Coastal already in a bowl and having nothing but its record to play for, will the Chanticleers be ready to bounce back or find itself lacking motivation against a lesser Sun Belt squad?

How the Public is Betting the Troy/Coastal Carolina Game

The public is backing the bounce-back here for Coastal, as 63 percent of tickets are on the Chanticleers in this game. The number has ticked up from -18 to -18.5, and the total has jumped from 52 to 52.5.

Who starts at quarterback for the Trojans? Taylor Powell is supposedly ready to go after a leg injury, but after back-to-back wins for Gunnar Watson, are the Trojans going to go back to Powell when they need a win? Watson does have the experience against Coastal, as he threw for 25-of-37 for 260 yards, a score, and an interception in a 42-38 loss that Troy led with 1:20 to play. However, the Trojans turned the ball over three times against Coastal, which can’t happen this time around.

The best-case scenario for Troy would be Kimani Vidal getting going on the ground, much like he did against Texas State. In that game, Vidal rushed for 162 yards and two scores, making the difference in a 31-28 win over the Bobcats. But Coastal’s defense is stronger against the run than it is the pass, so this might fall to quarterback play, as Vidal didn’t do much against the Chanticleers a year ago. If Powell or Watson can attack the Coastal secondary the way Chase Brice did, the Trojans have a shot.

The running game has to be better than it was against App State, as the Chanticleers couldn’t get anything going against the Mountaineers. Coastal averages 233.7 yards per game, but the Chanticleers only managed 55 yards on 29 carries, as neither Reese White nor Shermari Jones could get anywhere.
That could be a problem against Troy as well, as the Trojans only give up 94.4 yards per game on the ground. However, the Trojans likely have no answer for Grayson McCall, who has continued to light up scoreboards against every defense he’s faced. McCall has 15 touchdowns against just one interception on the year, and he’s the main reason why Coastal is averaging 45.7 points per game. Troy has played solid defense all season but hasn’t faced a receiver like Jaivon Heiligh, which could prove to be a matchup nightmare for a secondary that hasn’t really faced a good passing attack this year.

Troy isn’t used to following up wins with ATS success, as the Trojans are just 1-8 ATS in their past nine after winning the previous game. Meanwhile, Coastal has covered in four straight home games and is 8-2-1 ATS in its last 11 games against Sun Belt foes.

Historically, this matchup has been a high-scoring affair, as its hit the over in four straight contests, but this one might be an exception. The Trojans have played to the under in nine of their last 11 road games, and Coastal has gone under in four of its past five contests. However, Coastal has averaged almost 46 points per game, and there’s a real chance that the Chanticleers could hit the over by themselves, which makes their team total an appealing play.

Here’s one reason the total is as low as it is: storms in South Carolina could mean an ugly night for football. Temperatures will sit in the low 60s and drop as low as 55, with up to half an inch of rain possible. Wind could also play a role, as it will blow at 12 miles per hour toward the south-southwest.

Troy is coming off two wins, but escaping Texas State and Georgia Southern really isn’t good preparation for an angry Coastal Carolina team that should be looking to bounce back in a big way. The Chanticleers have the much better team and should be able to put up a big number, and I can’t see the Trojans staying in this game this time.
Troy has played Coastal tough in the past, but the Trojans aren’t as good as they’ve been in previous years, and the Chanticleers should be motivated. Give me Coastal. Note: Check this out! You can get a 200% bonus! The absolute best bonus in the history of online sports betting! How to receive it: Register for an account at Intertops Sportsbook through this special link. Deposit $25, then go to their Special Offers page and type in bonus code ROOKIE200. An extra $50 will be credited to your account balance instantly!