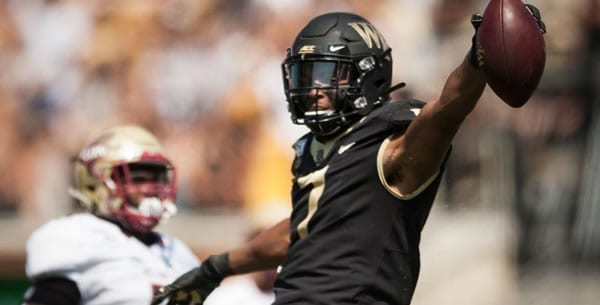 The defending National Champions were snubbed in the first College Football Playoffs rankings over a week ago. Despite winning 2 of the last 3 National Championships and holding an undefeated record, the Clemson Tigers were labeled the 5th best team in college football, which drew heavy criticism from the folks in upstate South Carolina. Luckily that drama was short-lived following this past weekend’s games where two teams inside the top 4 were beaten. However, the initial ranking was mainly a product of Clemson’s inconsistent play early in the year combined with a brutally weak schedule. Either way, the Tigers still have a clear path back to the College Football Playoffs that starts this week with a homestand against the Wake Forest Demon Deacons.

I must admit when I first saw this betting line I was surprised. Before last week’s disappointing 36-17 loss to Virginia Tech, the Demon Deacons were the 19th ranked team in college football with a 7-1 SU record on the season. Now Wake Forest is considered 32.5 point underdogs in their road trip to Clemson, which is the biggest underdog spread the Demon Deacons have been listed since their 2016 road trip to Louisville during the Lamar Jackson reign. Wake Forest was able to cover the 35 point spread against Louisville in 2016, and they have also covered the spread in 4 of the last five games since that meeting where they have been listed 20 point underdogs or greater. Despite the fact that Clemson has won the previous ten games over the Demon Deacons and been heavy favorites in every meeting; Wake Forest has traditionally performed well in this particular significant underdog role including a 4-1 mark ATS against Clemson in the last five meetings.

For starters, Clemson deserves to be among the top 4 teams in the country and will likely make some noise in the playoffs again. The Tigers defense is exceptionally talented, and the offense has tons of playmakers that will provide match-up advantages in any setting. With that said, Clemson has done an excellent job of covering these big point spreads mainly because of the Tigers defense that ranks 3rd in scoring, allowing just 11.5 points per game. This Clemson defense is the real deal. They get pressure on opposing quarterbacks, prevent big plays, and force turnovers consistently. The Tigers dynamic defense has only given up more than 14 points in one game this season, and that was in the narrow 21-20 win over North Carolina. Other than that particular game, the defense has been downright dominant.

The reason I believe that Wake Forest has another excellent opportunity at the cover is because the Demon Deacons offense can move the football and score points. Quarterback Jamie Newman is having an outstanding season completing 65% passing for 2,297 yards with 22 touchdowns and seven picks. Not to mention, WR Sage Surratt ranks 5th in the country in receiving yards with 66 grabs for 1,001 yards and 11 touchdowns. As a team, the Demon Deacons have done an excellent job of protecting Newman, relinquishing just 1.44 sacks per game (26th in FBS) despite numerous dropbacks. I have watched this Wake Forest offense closely and believe they will match-up fairly against the Tigers. It will not take a ton of points to force a cover with a 32.5 point spread, and I believe Wake Forest has a great opportunity to keep it much closer.

I don’t think there is betting prediction in the world that is 100% guaranteed and likewise, this one carries some risk. Clemson’s offense has been playing better in recent weeks hanging point totals of 59, 59, and 55 over the last three games. Tigers running back Travis Etienne remains one of the most electrifying rushers in college football with 1,214 yards and 13 touchdowns on the season. Furthermore, the Demon Deacons defense has not exactly defended the run well this season, allowing 164 yards per game. Therefore, there is some risk in the fact that the Demon Deacons could give up several big plays in the run game. However, if they can just have a decent performance. I really think the Demon Deacons offense will do enough to force an easy cover!