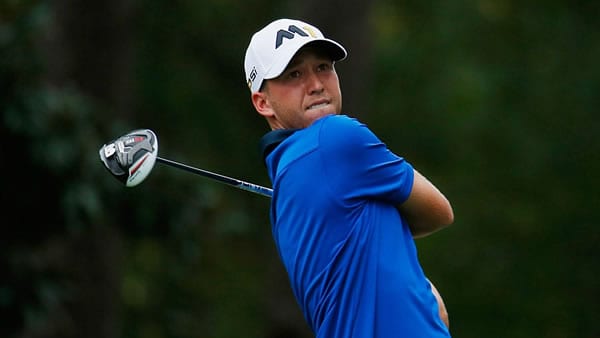 Few sporting events have the historical significance of The Masters. Golf is blessed to have several exalted stages to compete on, but Augusta National is at the top, and the very best in the game are measured by the number of green jackets in their closet. It is time to stroll down Magnolia Lane once again, and it’s nice to be back again in the Spring after Covid sent the 2020 Masters into the fall. Dustin Johnson set a tournament record while winning last November, and he returns as a 9 to 1 betting favorite to retain his title. Augusta has seen plenty of multi-time champions, with Phil Mickelson, Tiger Woods, and Bubba Watson all winning more than once in what would probably best be called the Tiger era. Nick Faldo, Ben Crenshaw, and Bernhard Langer won multiple times through the 80s and 90s, and of course, Jack Nicklaus won six times at Augusta from 1963 to 1986. DJ has a good chance to repeat from that historical standpoint, but his own short-term record is a more likely predictor of success as he has finished in the top-10 here in five straight appearances. However, the field is stacked against Johnson, with Rory McIlroy again looking to complete the career grand slam and Jordan Spieth officially “back” after winning his first title since 2017 last week. Spieth will look to be the first to win The Masters immediately following a regular Tour win since Phil Mickelson during the 2006 season. Justin Thomas, Jon Rahm, Bryson DeChambeau, and Xander Schauffele are just a few of the expected contenders at the top of the card, but I can make a case for about 30 players having a legit shot at winning this week. The field is also jam-packed with former champs as 18 green jacket winners will tee it up, and names like Mike Weir, Charl Schwartzel, and Trevor Immelman should remind you of how egalitarian this event can be.

Augusta National is probably the most well-known course in the world, and that is wild considering the course has never been officially rated by a sanctioning body and closes for prolonged periods of time on top of being as exclusive as exclusive gets. Play on the front nine wasn’t televised until 2001, but somehow the images of Augusta are etched in the minds of every golf fan. The bare details that call out 7,475 yards and par-72 are inconsequential to some point as the course contains so much personality beyond the statistics. I have been on record in saying that Augusta has lost something off its fastball in recent years, and while that wasn’t intended as harsh criticism, it does go to show that the course can be scored upon by the best in the world. Dustin Johnson hit the 20-under mark while winning by five last season, and the modern bomb-and-gouge game has somewhat exposed where the course lacks defense. A firm and fast Augusta can still be brutally difficult, especially in terms of hitting and holding greens, and conditions have been rather dry ahead of this week. If there is no rain at all, we should see a more traditional Masters where shotmaking will be at a premium. If the course does receive some moisture, things will trend back in favor of those that can be aggressive and execute. One subtle difference in 2021 will be the lack of a secondary cut the further you get away from the fairway, which will allow wayward drives to more easily roll into the pine straw or hazards. Par-five scoring will remain a big key, and success or failure around Amen Corner will have a lot to say about who is in contention come Sunday afternoon.

Each week, we take a look at the online betting sites and highlight the best values on the board. We give you a short, middle, and long odds pick to win and breakdown a couple of popular head-to-head matches that you can find at just about every golf betting outlet. Odds to win and pairings for this week can be found at Bovada. Here are our picks to win the 2021 Masters.

Thomas will be making his sixth Masters appearance, and he has gotten better in each season, finishing 36th, 22nd, 17th, 12th before finishing 4th in November while breaking par in all four rounds. He was 4th at The ZoZo, 3rd at the TOC, and won the Players Championship this season to have the appearance of a player that can turn it on when the stakes are highest. He leads the Tour in birdies per round (5.18) and in putting average on greens in regulation while ranking 2nd in scoring average. Thomas is 3rd in strokes gained on approach shots and 3rd in one-putt percentage Augusta handsomely rewards those kinds of clutch abilities. There always seems to be four or five players that draw more attention than Justin each week, so he somehow still flies under the radar despite being as talented as they come. I think he will be an early contender and could be around the top all week if he can be as mistake-free as he was last fall.

The 2020 Masters had to make some tough choices about who was allowed in the field once the event was rescheduled, and Berger was likely the most glaring absence considering he had won the Schwab in June and had a strong finish through the Tour Championship. He gets his chance this time around and remains in good form after winning the Pebble Pro-Am and finishing T9 at the Players Championship. He has missed just one cut this season and enters the week 20th in GIR with the 12th best birdie average and 16th best scoring mark. Augusta remains one of the better putting tests on Tour, and Berger should gain some strokes on the field with his top-20 strokes gained-putting average. He is a solid player around the greens, and his chances only improve if the course shows its teeth and remains fast. He has one top-10 finish in three previous Masters appearances, but I think he is at the top of his game as we head into this edition, and Berger certainly would fit the mold of a Zach Johnson-style winner.

With at least one runner-up finish in every Major Championship, it remains remarkable that Oosthuizen has just one career Major win. That one came at the 2010 British Open, and while I think that Louis’ window is closing to get another Major win, I think his best chance may be at Augusta. His most recent Major finishes had him 3rd at the US Open and T23 here in November, so he’s been relevant, but a T6 at a Concession course that features a lot of Augusta-like green features is a good sign that his game is in good shape as well. Oosthuizen is just 78th in birdie average, but his scoring average improves to 15th, and that kind of efficiency will pay off here. He is 3rd in strokes gained putting and 2nd in total putting to give him an edge once he gets to work on the greens and is also a top-10 player in strokes gained on approach. This is a second shot course, and I think that fits into what Oosthuizen’s current strengths are. He also has a deft hand around the greens, ranking 31st in scrambling, which should provide another advantage through the week.

Pick to win based on the predicted score for all four rounds. Check with your favorite sportsbook for single round matches and a variety of prop bets.

Harman is having a better overall 2021 campaign and owns sizeable advantages in just about every statistical category over his opponent here, but Kuchar has the massive experience edge at Augusta, and that is meaningful. Harman will be making just his third Masters start while Kuchar is teeing it up for the 15th time with eight top-25 and three top-5 finishes to his credit. Kuchar started his Masters’ career with a low amateur finish in 1998 but really hit a stride here through the mid-2000s and has more career top-5 finishes at Augusta than any other Major combined. Matt is also playing his best golf of 2021 with a third-place finish at the Match Play and a T12 last week in Texas. Harman is going to be a tough guy to get rid of, but the same can be said for Kuchar, and his experience edge is going to carry him to a slight upset win.

Guys like Fred Couples, Tiger Woods, and Jordan Spieth have tremendous long-term success at Augusta, and Reed is building toward that kind of course-specific record after winning in 2018 and finishing 10th this fall. Something about this course just seems to fit his eye and play style, and he certainly can gain an edge on any opponent as the Tour’s best putter in terms of overall strokes gained. Cantlay has a low amateur finish as part of his Masters’ record but is just 1-2 against Reed in the three editions where both were in the field. Cantlay hits more greens than his opponent here, but Reed erases that edge with the putter and actually has the better birdie average as a result. I really like Reed’s chances to win this match and even push toward the top of the field in general if the course stays firm, but he can handle any conditions around Augusta and is a very good value play as well. Bet your Masters picks FREE by taking advantage of a 100% REAL CASH bonus on your first deposit of $100 to $1000 at BetNow Sportsbook!