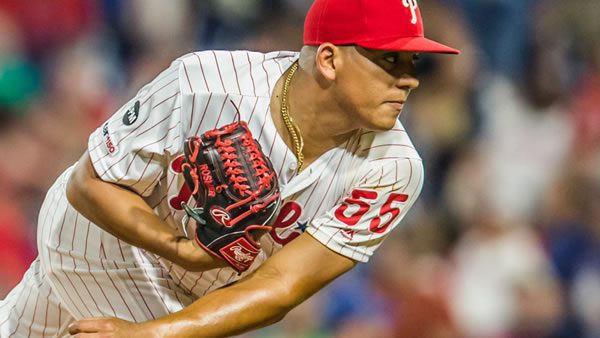 The Philadelphia Phillies host the San Diego Padres on Friday October 21st at Citizens Bank Park. The first pitch in this matchup is scheduled for 07:37 ET. The MLB Odds Board places Philadelphia as the favorite (-110), with an OU line set at 7.5.

San Diego looks to keep things rolling after taking down Philadelphia by the score of 8-5. Philadelphia came up with 8 hits leading to 5 runs against San Diego’s pitchers. The Padres lineup had a good night at the plate, coming up with 13 hits, leading to 8 runs. Heading into their last game, San Diego was the betting favorite at -113.0. So far, the team has been the favorite in 122 of their games, winning at a rate of 57.9%. With the over-under line set at 7.0 runs, the Padres and Philadelphia combined to go over this total. Games involving the Padres have stayed below the over-under line more than half of the time, at 80-85-6.

The Padres are looking to continue adding wins, as they are 4-1 over their last 5 games. Over this stretch, the team has a positive run differential at +6. Overall, San Diego is averaging 4.35 runs per game. Over their last 5 contests, they have been producing at a similar rate, at 4.35. So far, San Diego has won over half of their 54 series played, going 28-18-8.

Philadelphia will be looking to move on from a tough loss to the Padres by the score of 8-5. On their way to giving up 8 runs, the Phillies staff allowed 13 hits. Offensively, they finished with 5 runs on 8 hits. This loss came as no surprise, as Philadelphia came into the game as the underdog, getting 103.0. In their 59 games as the underdog, their straight-up win percentage sits at 46.0%. The Phillies and Padres went over the run total line set at 7.0 runs. For the season, the team’s over-under record is 87-78-5.

Across their last 5 contests, the Phillies are above .500, going 3-2. During this time, the team’s run differential sits at +9. Philadelphia has benefited from strong pitching, as their offense has slipped in their last 5 games, averaging just 4.8 runs per game. Their overall average sits at 4.62. On the season, Philadelphia has won more than half of their series, going 26-22-6.

Joe Musgrove gets the start for the Padres, with an overall record of 10-7. Through 30 appearances, Musgrove has an ERA of just 2.93 while averaging 6.03 innings per appearance. In his previous outings, right-hander opponents are hitting .227 off the right-hander. Opposing batters are hitting for power at a below-average rate against Musgrove, as he is allowing just 1.09 per 9 innings. In terms of strikeouts, Joe Musgrove has a strong strikeout percentage of 25.0%, including a per-game average of 6.13. Command has been a problem for Musgrove, as he is giving up 2.09 walks per outing.

Philadelphia will roll with Ranger Suarez (10-7) as their starter. So far, Suarez has put together an ERA of 3.65. In his appearances leading up to today, he has lasted an average of 5.35 innings. Opposing teams have hit the ball well against the right-hander, with a batting average of .249. Opposing batters are hitting for power at a below-average rate against Suarez, as he is allowing just 0.87 per 9 innings. On the season, Ranger Suarez has had no problem racking up strikeouts, posting a strikeout percentage of 19.0%. This has led to an average of 4.45 K’s per game. For the season, he has struggled with command averaging 3.36 walks per outing.

Today’s matchup between the San Diego Padres and Philadelphia Phillies will be their 10th meeting of the season. Currently, Philadelphia is winning the season series 5-4. Through 9 games, the series over-under record is 3-6, with the average run total sitting at 8.33 runs per game. The averge scoring margin in these meetings is 2.56 runs.

There’s no value in this game, as is the case with many games this deep in the playoffs. We’re not telling you what to bet here, but if we were forced to, we’d roll the dice with the over, as there’s slightly more evidence that we’ll see offense than not. Best of luck in whatever you decide!

Free MLB Pick: Lean to the Over 7.5 Runs. Did you know that you can bet on baseball games at reduced odds? Stop overpaying (football/hoops too!) and start paying less at BetanySports! You’ll be so glad you invested the 5 minutes it takes to switch!