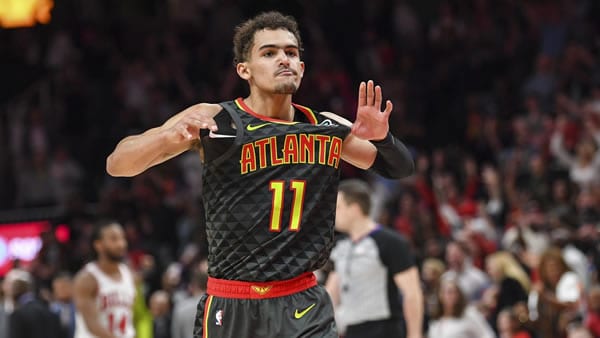 After splitting the first four games of this best-of-seven Eastern Conference semifinals series, with each team winning once on the other’s home court, the 76ers and Hawks play a pivotal Game 5 Wednesday night in Philly. The top-seeded 76ers opened this series as a -180 favorite to win it, with fifth-seeded Atlanta getting +160 as the underdog. Now, despite concern about the health of its best player, Philadelphia is chalked at -300 to win this series, with the Hawks getting +230. Here’s our homework on this Game 5 with today’s free NBA pick.

The NBA playoffs betting market opened Philadelphia at -6.5 for this game with an O/U of right around 224.5. Early betting action then dipped the Sixers to -6, and that total to 223.5.

Bettors looking to eschew the point spread could get Philly at -250 on the Game 5 money line at BetOnline, while Atlanta could be found getting +250 at Bovada to win this game outright.

This series is tied at two games apiece following Atlanta’s 103-100 Game 4 victory Monday night. The Hawks, in danger of falling down 3-1 in the series, trailed 60-42 late in the second quarter and 62-49 at the half. But Atlanta pulled to within 82-80 by the end of the third quarter, later trailed 98-94 with just under three minutes to go but finished the game with a 9-2 run to steal the outright victory as a three-point home dog.

Atlanta only shot 37 percent from the floor Monday, while Philadelphia shot 44 percent. But the Hawks won the turnover battle 12-4.

With Monday’s win, Atlanta is now 6-3 both SU and ATS this playoff season. The Hawks are also currently 33-14 SU, 27-19 ATS since Coach McMillan took charge back in April.

The Sixers played eight games better than Atlanta in the regular-season standings, 49-23 to 41-31, and took the season series from the Hawks two games to one. So Philly is 4-3 both SU and ATS against Atlanta this season.

Unders played 38-34 in Sixers games this season, which averaged 222 points.

Totals are split 2-2 in this series, as the games are averaging 228 total points against an average O/U of 224.

Embiid is probably going to play Wednesday night, but he certainly didn’t look too healthy Monday night. And if he isn’t even 75 percent of his usual self Philadelphia’s in trouble. Atlanta, meanwhile, is 3-2, both SU and ATS on the road in these playoffs, plus probably catching a bucket more than it should on the point spread. We like the Hawks here for our free NBA playoffs betting pick, and they might win this game outright. Bet your Hawks vs. 76ers pick FREE by taking advantage of a 100% REAL CASH bonus on your first deposit of $100 to $300 at MyBookie Sportsbook! (Must use bonus code PREDICT100 in order to receive the extra bonus cash!)