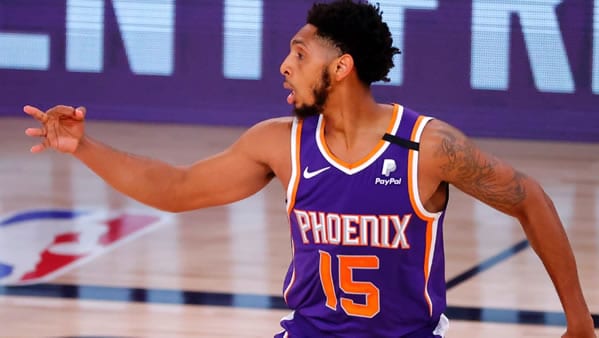 After splitting the first four games of this best-of-seven Western Conference affair, each team winning once on the other’s home court, the Suns and Lakers head back to Phoenix for a crucial Game 5 Tuesday night. Los Angeles led the series two games to one but lost Anthony Davis to injury early in Game 4, then lost the game. So Phoenix is now a -170 favorite to win this series, with the Lakers getting +145. Here’s our homework for Tuesday’s game, with our free NBA playoffs pick.

The NBA playoffs betting market opened Phoenix at -4.5 for this Game 5, with an over/under of right around 209. Early betting action then bumped the Suns to -5 and dropped that total to 207.5.

Any Lakers backers out there who think LA might take this game outright could get +180 on the NBA money line at South Point.

Phoenix took the opener of this series at home, but Los Angeles took Game 2 to steal home-court advantage. LA then won Game 3 at the Staples Center, but the Suns bounced back to take Game 4 Sunday 100-92, regaining HCA for the remainder of this series.

Phoenix trailed the Lakers Sunday 48-44 late in the second quarter, then took advantage of Davis’ absence to go on a 32-15 run spanning the halves to take control. Later, the Suns, later led by 18, let Los Angeles get within 95-88 with three minutes to go but held on for the victory and the cash as +250 dogs on the money line.

Phoenix only shot 44 percent from the floor Sunday but held the Lakers to 40 percent shooting. The Suns also won the turnover battle 16-10.

With Sunday’s loss Los Angeles is now 24-12 SU but only 16-20 ATS when both Davis and LeBron James play this season. And Davis is currently listed as questionable for Tuesday’s game with a sore knee and groin. The Lakers played 19-17 SU, 15-20 ATS this season without Davis.

Phoenix took this year’s season series from LA two games to one. The Suns won the first match-up back in March 114-104, a game Davis missed. Phoenix then beat the Lakers three weeks later, 111-94, a game both James and Davis missed. Los Angeles then defeated Phoenix three weeks ago 123-110, with Davis but without James.

Elsewhere on the injury front, Suns G Chris Paul is dealing with a sore shoulder, but he put up 18 points and nine assists, with zero turnovers, in 32 minutes in Game 4, so perhaps he’s OK.

Unders are 4-2-1 in Lakers-Suns games this season, which are averaging 199 total points against an average O/U of 214.

Phoenix owns momentum heading into this game, and Los Angeles is probably down one of its Big Two. LeBron tried to get LA back in the game Sunday without Davis, but the Suns wouldn’t let him do it. They’re just the better team. We like Phoenix here, minus the points, for our free NBA playoffs, pick for Tuesday. Bet your NBA picks FREE this week by taking advantage of a 100% REAL CASH bonus on your first deposit of $100 to $300 at MyBookie Sportsbook! (Must use bonus/promo code PREDICT100 to get the extra bonus dollars credited!)