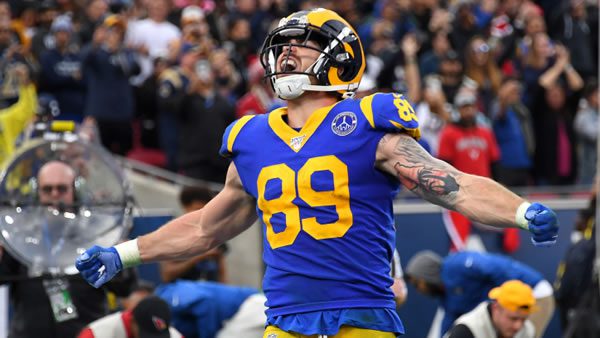 Point Spread:LAR +3/TB -3 (BetOnline - If getting paid fast is your top priority, this is the bookie for you! We tested them THREE times and they paid out via Bitcoin in under an hour! Twice under 30 minutes!)

The Tampa Bay Buccaneers completed the first step towards defending their Super Bowl LV title with last week’s impressive NFC Wild Card victory over the Philadelphia Eagles. Despite the Eagles’ season resurgence, I unloaded by laying the points with Tampa Bay due to the significant match-up advantage the Buccaneers defense held over Philadelphia. The Bucs defense dominated by holding Philadelphia scoreless for the opening three quarters before allowing some points in garbage time. On Sunday, the Buccaneers will be faced with a more daunting match-up when they host the Los Angeles Rams at Raymond James Stadium.

Like the Buccaneers, the Rams were also impressive in last week’s Wild Card match-up. The Rams dominated their NFC West rival, the Arizona Cardinals, by a final score of 34-11. Los Angeles appeared to be clicking on all cylinders with touchdowns from receivers Odell Beckham Jr, and Cooper Kupp combined with a dynamic 1-2 punch from tailbacks Sony Michel and Cam Akers. With that being said, it was the Rams’ defense that truly opened eyes by shutting down one of the most prolific offenses in the league. The Rams put the clamps on QB Kyler Murray by keeping him under duress throughout the game. In the end, the Rams allowed just 184 total yards and forced two turnovers, including a game-breaking pick-six. It was the style of performance that truly showed that the Rams are dangerous on both sides of the football and perhaps provokes a strong argument that they are currently playing their best football.

More Picks: Get all of our free NFL Divisional Round Picks >>>

This Sunday’s match-up is truly a star-studded
affair on the offensive side of the football. The Rams have numerous playmakers in QB Matthew Stafford, Beckham, Kupp, and others. Meanwhile, Tampa Bay is led by the greatest quarterback in the history of the game in Tom Brady and has possessed one of the NFL’s best offenses throughout the season. As much as I would love to talk about the offenses and potential fireworks, I really believe this game will be decided by the defenses.

The Rams have the elite pass-rush and secondary
to match up with Tampa Bay’s offense which has lost some of their biggest talents in the passing game. Without Chris Godwin and Antonio Brown, the Buccaneers’ passing attack is more easy to defend against WR Mike Evans and an aging TE Rob Gronkowski. Meanwhile, the Buccaneers’ dominant run-defense has the possibility of taking away the Rams’ physical rushing attack while putting QB Matthew Stafford in more unfavorable scenarios. In other words, both defenses have paths to victory in this game and have upside match-ups
that cannot be ignored.

Ultimately, I think the Rams have the most
probable paths to victory. While I never like to bet against Brady, I cannot ignore the match-up advantage the Rams have on defense. Los Angeles has the pass-rush to make Brady uncomfortable and should have the talent to lock up coverage with success. On the other side of the football, Tampa Bay’s run defense is strong. However, they are vulnerable in the secondary. Rest assured, Head Coach Sean McVay will find ways to get Kupp and Beckham the football in space and create downfield opportunities. Additionally, I think the 1-2 punch of Michel and Cam Akers could provide challenges to Tampa Bay’s run defense. Both running backs offer different skill sets, which are both effective. If the Rams can avoid disaster in early down situations, I am willing to bet Stafford can
avoid throwing this game away.

Jay’s Pick: I believe the wrong team is favored. I will gladly take the team with more paths to victory. Take the Rams +3. Bet your Divisional Round picks for FREE by taking advantage of a 100% real cash bonus at GTBets! They offer fat reload bonuses and a killer Loyalty Program too!