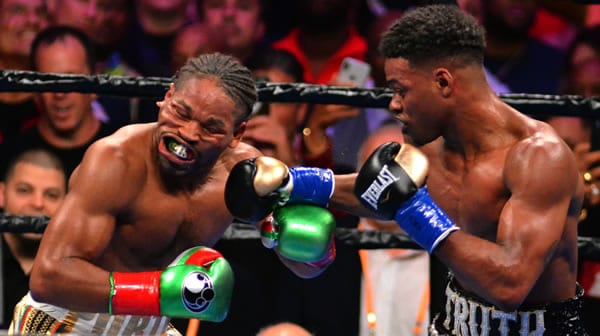 Where: AT&T Stadium in Arlington

Errol Spence defends his WBC and IBF Welterweight belts against former champion Danny Garcia on November 21. It’s a tip-top 147-pound battle between two accomplished championship fighters. Unbeaten, the 30-year old Spence bounces back in this fight from a near-fatal car crash, and seeing him back in the ring after that will be refreshing to see. He certainly isn’t being eased back into action with the still-dangerous Garcia, who really needs to make a big move now to continue demanding big lucrative fights. There are a lot of dots to connect in this bout as we try to piece together the best move for Spence-Garcia.

The Philadelphian Garcia, now 32, has been in a lot of big fights, won some big ones, and achieved a lot of distinction in his career. Once a dominant and unified champion at 140 pounds, his list of victims includes big names like Amir Khan, Erik Morales, Zab Judah, Lucas Matthysse, Lamont Peterson, Robert Guerrero, and others. Since moving up to welterweight, however, he has met his match, dropping a pair of decisions to Shawn Porter and Keith Thurman.

On one hand, those two decisions were not landslide victories for either of Garcia’s opponents. He has been in nine world title bouts, so maybe two decision losses of a competitive nature aren’t enough to relegate him to the second-tier. Still, there’s a reason you don’t hear Garcia’s name much when people discuss who will reign as the top dog at 147 pounds. It’s fair to say he has cooled off some since his glory days at 140 pounds. His high-water mark, an upset win over Matthysse, was over seven years ago. I think these odds reflect the notion that Garcia’s window of big-time success may have passed him by.

It would still be a fool’s game to undersell Garcia on the basis of his name not being as hot as it once was. We’re still dealing with a natural fighter, a pure sort. His skills are immense, and even if his power doesn’t register as well at the top levels of this division, it’s not so much a reflection on him as it is the fact that this is one of the deepest 147-pound weight classes in recent memory.

DEPOSIT $25 AND GET A FREE $50 BET AT INTERTOPS SPORTSBOOK! MUST USE BONUS CODE ROOKIE200 TO GET THE BONUS CREDITED!

Spence’s car wreck, a near-tragic moment where Spence absorbed numerous serious injuries, is an element that looms over this fight, especially for potential Spence backers. You can assume everything is up-to-snuff, but in today’s age of limited access, how sure can you be that vintage Spence will surface? If we’re going to talk about the effects of age and ring-wear with Garcia, what do we know about the true physical toll of that car crash? Personally, I’m inclined to think that him being back in the ring, this quick attests to the rate and completeness of his recovery. They could have milked this more and kept him out well into 2021 without much complaint, and here he is, just a little over a year removed from his last fight—a decision win over Shawn Porter.

This type of boxing arithmetic doesn’t always work out, but Spence thriving against Porter and stopping Lamont Peterson, two guys who gave fits to Garcia, is worth noting. This is a time of big robust welterweights, and I think Spence has a size advantage, being a guy where it’s hard to pare down to 147, whereas Garcia has moved up and lacks the size of some of his contemporaries. Spence has also shown he can thrive against really good fighters at this weight, with big wins over Kell Brook and Shawn Porter, as well as his absolute clinic against 39-0 Mikey Garcia in 2019.

The champion does a lot of things well. He can thrive under pressure and has stood in there without much ill effect against really good fighters who were really bringing the heat on offense. Errol is good on the outside while also being a demon inside, where his bodywork and more-telling shots to the head win the day. We saw him last year using range and long-distance boxing to subdue Garcia before using his inside strength and tenacity to quell the fierce Porter. He is very fluid and quick. Spence shows a level of craft beyond his years and experience. On the inside, he ties guys up in knots while still being able to land hard shots. His defense is tight, even on the inside. He’s really the total package. The champion shows great dexterity, being very flexible, as he twists out of trouble while in the pocket. He can hunt guys down or lull them into something big.

So we ask what Garcia can do to cope with all this? Spence can be reached, and Garcia isn’t without some veteran tricks of his own. His left hook is a Philly classic, a really pure shot that can still land with a lot of impact. I just think his deficits in speed and size are major drawbacks. I think this would have been a great fight if Garcia was 25 or 26. And while he hasn’t necessarily been punished since then, a little of the edge seems to be gone. Still, picking against Garcia when his back is against the wall like this against a fighter where they may be some lingering questions from his accident isn’t something you do with an abundantly-clear head. Even so, I think Spence to win is the right move in this one. I’ll take the champ.

I’m betting on Errol Spence at -338 betting odds. Sure, there could be some depreciation on Spence, but Garcia’s expiration date may be in the rearview. Even if it’s not, Spence has been able to make it work at a higher level than this before, and if he were to meet his match at 147, this would be a strange time for it to happen. Note: Don’t forget that we offer free weekly NFL picks!