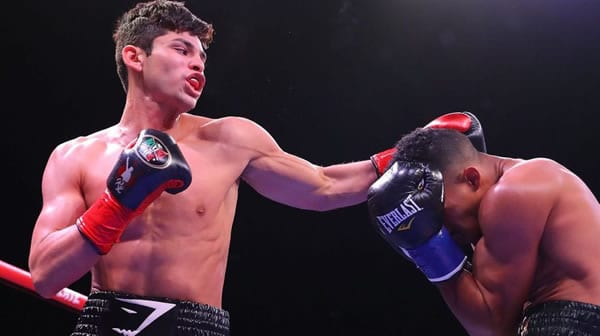 Unbeaten phenom Ryan Garcia takes on Luke Campbell for the WBC Lightweight title on January 2. It’s a compelling 135-pound match, featuring one of the young prodigies of the sport in the 22-year old Garcia, taking on the former Olympic gold medalist Campbell. Eleven years, Garcia’s senior, the 33-year old Campbell, is one of the world’s best fighters to have not won a world title. A win here would do wonders for his career. For Garcia, it’s a chance to add a real nugget to his resume that would justify all the hype. Let’s break this one down!

Garcia is the talk of the sport. Young, good looking, and with the right connections, Garcia’s big push starts here. You can watch a video of him training, and his talent jumps off the screen. His hands move in a blur. Many of his fights consist of a whirlwind of Garcia punches, with the opponent deposited on the floor and people trying to figure out what just happened. It’s just hard to deal with this level of talent. His sheer athleticism and physical gifts make him a handful for any fighter at or near his weight. And he has length, standing five-ten with a 70-inch reach, giving him an edge on most 135-pounders.

Decades of following the sport, however, will lead some to hold out some judgment on a fighter like Garcia. We have seen fighters before like him who didn’t work out as some had hoped. Those fighters were also tornadoes offensively, outrageously-gifted offensive fighters where their hands are so compelling that we forget to evaluate other areas. But as Garcia climbs the ladder in terms of opposition, other aspects of his game will be drawn into question. And it’s been hard to see through the blur of his hands to assess other things that matter.

Right now, Garcia’s star as a celebrity shines brighter than his actual merit as a fighter. There is nothing wrong with how they’re bringing him up, gradually raising the level of opponents. But as of now, his work consists of beating guys who were there to be beaten—journeymen, gatekeepers, and very fringe and marginal contender-types. Luke Campbell is a different kettle of fish altogether—one of the best lightweights in the world.

After winning Olympic gold, Campbell has seen a lot go his way, with some close calls keeping him from achieving glory. He has good size for a lightweight, an inch shorter than Garcia, but with a one-inch advantage in reach. He came around during what has been a real renaissance period for British boxing. And he’s been a little snake-bitten at times in his career.

Campbell was 12-0 when he lost a very close split nod to the more-experienced Yvan Mendy. “Cool Hand Luke” got a shot at a world title, but his father passed away two weeks before he took on Jorge Linares, where he lost another razor-thin split decision. He beat Mendy in the rematch before taking on one of the best in the world in Vasyl Lomachenko, losing a decision. That was in August of 2019 and was Campbell’s last fight.

Bet on who wins the fight, round, and more: MyBookie!

On one hand, a critic could point out that Campbell falls short at the highest levels, sort of like Howard Davis, an American gold medal winner who was never able to get over the hump in lightweight title fights. Then again, he hasn’t had it easy, fighting Linares with his mind cluttered and then being fed to the previously-dominant Lomachenko. He might again be getting thrown into a situation that is too difficult. Garcia is a projected superstar in the making. But the fact remains that Garcia has never beaten anyone close to Campbell’s level, leaving a gap in there to make a case for the hard-luck Englishman.

There is a lot to like about Campbell. He’s a tall lightweight who knows how to use range from his southpaw stance. He moves crisply. He punches crisply. And with 16 KOs in 20 wins, he can crack. He boxes very cleanly and has abundant skills. You don’t win Olympic gold without big-time boxing skills. He matches up physically a lot better with Garcia than recent opponents. And it’s the skills that could really put him over the edge. Watching Garcia fight, it’s hard to say that he doesn’t have skills. But in terms of boxing, is Garcia more talented than he is skilled at this point? Does that leave a big enough crease for Campbell to get in there and see what he does rise to the top?

A lot of times when a fighter as prodigious as Garcia comes on the scene, the critic in all of us tries to determine his stopping point—when he will hit a wall. Campbell being that guy, has both positives and negatives. This is, in many ways, a quantum leap in opposition for Garcia. But is it a manageable one? Campbell is competent, talented, and hungry to make his mark. But is there anything compelling about him to make him a threat to derail the crown jewel of Golden Boy Promotions?

I don’t think Campbell backers are without hope or just cause in this situation. You’re getting a fat price on a really good fighter against a young and unproven youngster who only recently started fighting at 135 pounds. Perhaps sometime, sooner than some expect, a fighter will combine the skill, gumption, and talent to cut through the blustery sandstorm that is Garcia and test the other parts of make-up. I just don’t think Campbell is the one to do it. I see Garcia passing this test and getting the “W” on the 2nd.

I’m betting on Ryan Garcia at -325 betting odds. This is his toughest test, but a test he should pass with his off-the-charts talent winning the day. Campbell will be tough, and if Garcia hits a wall, the Brit is more than capable enough to bring that to light. I just don’t see Campbell consistently being able to find an answer for Garcia’s offensive fireworks. Bet your Garcia/Campbell pick LIVE in progress at the website with the bes in-game wagering platform on the planet: Bovada Sportsbook! Plus you get a 50% bonus and your credit card WILL work for depositing!