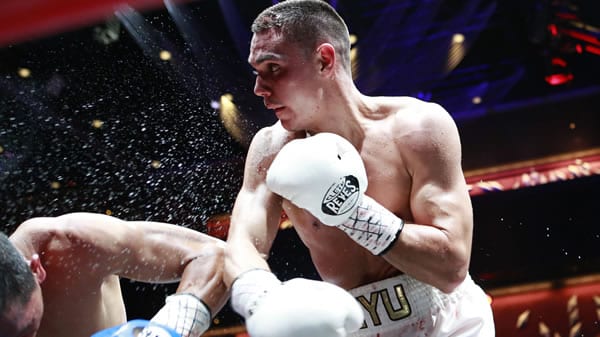 Tim Tszyu takes on Michael Zerafa on July 7 in a big 154-pound showdown in Newcastle. Unbeaten in 18 fights, Tszyu looks to further clean up the Aussie scene, with one relevant figure remaining in the form of the 29-year-old Zerafa. Coming off a first-round KO of Anthony Mundine in March, Zerafa looks to score the biggest win of his career, but it won’t be easy with a red-hot Tszyu. Over the past year or two, Tszyu, 26, has made it clear he is more than just the offspring of a famous boxer.

And as a stateside boxing observer, that was what I was thinking. His father, Kostya, was truly a great, despite his name not ringing as loudly as other greats. You can see some of the same traits in his son. His son even looks like him. Certain aspects of his father’s style have been inherited. You see that great balance, where it always seems he has his feet so solidly underneath him. The way he inches forward with a tight defense with a poker-face as he gets in position to launch hurtful shots, it’s just like pop.

I don’t think he has the heaviness of hand that his father had. And Tim can sometimes wing shots a little more than his precise sharp-shooting father. But there is an undeniable quality to Tszyu. He can throw from long-range and in-close. He has all the punches in his arsenal, can land hurtfully to the body, and knows how to close escrow when he has his man in bad shape. How far he goes will be decided when he steps outside of this realm. But it just so happens that there are a handful of quality fighters at and around his weight in Australia. With guys like Jeff Horn, Dennis Hogan, and Zerafa, Horn can take on a good group of contenders before setting his sights on the bigger fish in the 154-pound pond.

That’s about where Zerafa fits in. His own attempts to make noise outside of Australia haven’t gone well, but he has shown he is among the top dogs in his homeland. Almost 6-feet, Zerafa has good size, a great mentality, and a lot of talent. He can wing that right hand with some power, and when he zeroes in, he can really do damage. He stopped Jeff Horn and was on the verge of another win when a miracle punch from Horn saved the day and helped earn him a majority decision.

Zerafa is a good fighter. Seeing him get stopped by Peter Quillin, even if that was a long time ago in 2015, wasn’t a good reflection on him, nor was a decision loss to a post-peak Kell Brook in 2018. He has shown that he can’t really hack it at the next level, the same level that awaits Tszyu should he win this fight. And for him to blow it against Horn in the second fight, it just helps paint a picture of Zerafa—a good fighter with a lot of ability, but with a stubborn case of mediocrity preventing him from making that next step.

That’s not meant to disparage Zerafa. He truly has nice hands. He knows where to put the punches where he wants to. He can place a nice hurtful shot at will. His hands are dangerous, and he knows how to put them on you. He has good explosiveness and can suddenly snap out with dangerous punches and combinations. And for 154 pounds, he has nice size—good height and reach. He will have a few inches on Tszyu, who has been taller than most of his opponents up to this point.

There seems to be a general wispiness to Zerafa that is hard to describe. It’s not to imply that he can’t take a punch or that he’s delicate in the ring. But he’s just not a really robust fighter. He’s tall and graceful but not really solid and sturdy. That’s not to say he can’t take a shot, as he has been stopped just once in a long career. But he’s more of a graceful swan than a pit bull—let’s just put it that way. He’s just a bit wispy. And against a fighter where being solid is a family institution that could stand out in a certain way.

Still, out of all of Tszyu’s competition on a domestic level, Zerafa might match up as well with him as any of the others. Hogan’s swashbuckling couldn’t make a dent, nor could Jeff Horn’s roughhousing tactics. I think Tim might find more resistance in the form of Zerafa, an angular slashing puncher whose offense is pretty dependable. He’s going to get some shots off on Tszyu, the main question being, can he make a dent? With a prospect like Tszyu, the first evaluations occur along offensive lines. His defense and chin are tests that come later, and I don’t rule out that Zerafa can test those aspects of Tszyu’s game.

Given the dominance Tszyu showed in the Horn and Hogan fights, a lot of people are forecasting similar ease with this proposition, and I’m not so sure. We’re still dealing with a formative talent who could be tested. And in the event that Zerafa gets a head of steam, he could provide some menace in this fight. I just think the accuracy, strength, poise, and solidness of Tszyu will be enough to see him through this challenge. I’ll take Tszyu.

I’m betting on Tim Tszyu at -1400 betting odds, with a possible play on “under” as the fight nears and those numbers are released. I just think that if Zerafa were meant to elevate past this level, it would have happened before now. And against an ambitious young contender with a lot of positive momentum, it appears to be a bit outside his realm.