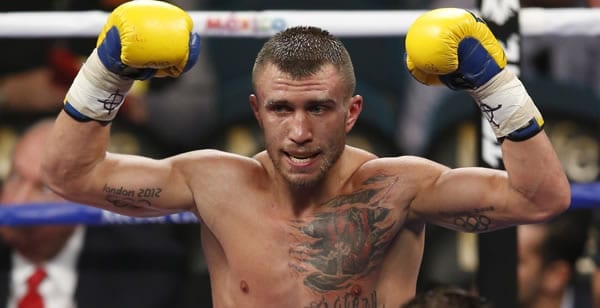 Vasyl Lomachenko takes on Anthony Crolla in defense of his WBO and WBA Lightweight Titles at Staples Center in Los Angeles on April 12. Lomachenko is considered by some to be the best pound-for-pound fighter in the world, with titles in three weight classes in just 13 fights, which followed a legendary amateur career where he won two Olympic gold medals with a 396-1 record. Crolla, a former lightweight titleholder who is a year older than Lomachenko at 32, is a tough nut who has been fighting at a high level at 135 pounds for over 5 years. Can he give Lomachenko a run for his money or will Lomachenko continue his rampage?

In his last fight, Lomachenko unified two lightweight belts with a 12-round decision over Jose Pedraza. It broke a streak of eight straight stoppages and was his second fight at 135 pounds. I think it’s fair to say that he’s been a little less-lethal since rising up to lightweight. He is a bit smallish for the weight, and his extreme skill is a bit more-muted against bigger world-class foes. But he has still won his two lightweight fights with room to spare, beating two good fighters in Pedraza and Jorge Linares. But in getting knocked down by Linares and going the distance with Pedraza, we’ve seen a less-dominant Lomachenko the last few fights.

Be that as it may, there’s a lot of reasons why a fighter who is 12-1 is considered by many to be the best fighter in the world. Lomachenko was a legendary amateur, who started his career in a bizarre way—immediately thrown into the deep end. In his second fight, he lost to Orlando Salido—a hardened veteran. Since then, Lomachenko took off, flashing some of the more-breathtaking skills seen in a prize ring. Good fighters were left swinging at the air and gasping for breath. We saw a slew of world-class fighters just quitting on the stool, unable to handle Lomachenko’s mastery. He has beaten top featherweights and junior lightweights, while he now looks to clean out the 135-pound weight class.

Lomachenko’s true worth is hard to capture with words—you almost have to see it to understand it. His fight IQ is off the charts. When you go 396-1 and win two gold medals as an amateur and then win belts in three divisions as a pro, fighting comes innately. He’s a natural fighter. His feet are amazing, as he uses angles and range expertly to keep opponents off-balance. He has an uncanny knack of positioning himself in such a way that his opponents can’t really get off their own shots. Lomachenko is cagey, hits hard, is fast, and he doesn’t let anything slide. He’s ultra-concentrated and a truly-unique fighter who has taken a lot of things in the sport and brought it to the next level.

It’s a really big test for Crolla and as the odds suggest—somewhat of an unattainable goal. And even when wrapping one’s head around the true overall worth of Crolla, it’s not hard to argue that this is too tall of a task. He was moving up the ladder and about to fight for a title when he had his skull fractured after confronting two burglars who were robbing a neighbor’s house. His comeback was inspirational, not to mention very successful. His first shot at the title against Darleys Perez ended in a draw, with Crolla able to knock Perez out in the rematch to become champion. A title defense followed before Crolla lost a close decision to Jorge Linares. In the rematch, Linares won a clearer decision, handing Crolla his second straight loss.

As Crolla has shown, though, counting him out can be a mistake. With nice wins over Ricky Burns, Edson Ramirez, and Daud Yordan, he enters this fight on a winning note. He’s a never-say-die fighter whose back is against the wall. He knows he has to perform well here to avoid becoming yesterday’s news. He’s too far along in the game to go to the back of the pack again. He needs to perform here but is really up against it. Sure, he has performed well at the championship levels of the lightweight division. The only issue for him is that Lomachenko represents a much higher level. It would be one thing if he shined against Mikey Garcia or Terence Crawford, but operating within the WBA, he was insulated from the real top dogs. And in two fights with former Lomachenko victim Linares, he couldn’t pick up a “W.” Crolla is likely a few levels below Lomachenko and will need a superhuman effort to forge a victory in this spot.

Lomachenko matches up better size-wise against Crolla than he did in his first two lightweight fights. Crolla is more his size. And while Crolla surely views this as a spot of high urgency, Lomachenko is also pining to reclaim the form he showed a few fights ago. These odds make it hard to just bet on the winner unless of course, you fancy Crolla, who is going off at a tasty +3000. Even as one who fancies underdogs typically, I don’t see it. Crolla has only been stopped once in a long and demanding career—back in 2012. I just see it being a lot to ask for him to get to the very latter part of the fight or even last the distance. I’m taking the “under” in this one, at odds of -260 that Crolla doesn’t make it to midway through the tenth round.

I’m betting that the Lomachenko-Crolla fight goes “under” 9.5 rounds -260 at the bestr odds offered at 5Dimes. I think Crolla’s style lends itself to getting the brunt of Lomachenko’s vast skills. His eagerness and doggedness is commendable, but he is in over his head, and I don’t see him getting to the final bell.