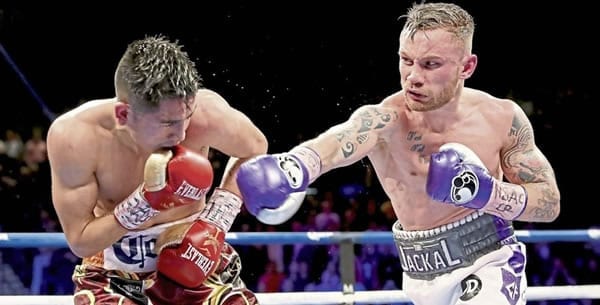 Jamel Herring defends his WBO 130-Pound title against former champion Carl Frampton on June 13. The bout will be held in Frampton’s stomping grounds in Belfast, though we will keep an eye on that locale, as things can change amid this current climate. It’s a nice matchup between two fighters where picking a winner is a tricky proposition, as the closeness of the odds would attest. Frampton has sailed to taller heights in his career, winning titles at 122 and 126 pounds. But after losing a few fights at featherweight, he looks to make noise in a new weight class. In Herring, however, he faces a very professional and accomplished fighter who has seen his best success in recent outings.

We know more about what we have with Frampton, as the Irishman has been in some big events, namely splitting two fights with Leo Santa Cruz in high-profile bouts. He is now 33, and some suspect that his best work might be in his rearview. With Herring, he’s a year older at 34 but seems to be hitting his stride. A former Olympian and US Marine, he entered 2018 as a contender, but one who was struggling to find his footing. He started stringing some wins together, culminating in a title-winning effort over Masayuki Ito. With a unanimous decision win over Lamont Roach in November, he registered his first title defense.

Herring is the bigger man, a natural super featherweight taking on a fighter who first made his bones at 122 pounds. Herring stands a lanky 5’10” and will have at least five inches in height over Frampton, a considerable edge, especially at this weight. Even more staggering is his 8-inch reach advantage. These dimension differentials are seldom seen anywhere near 130 pounds.

With Herring, there are some issues for the purposes of winning this fight—against this caliber of opponent and in hostile territory, to boot. He’s not a terribly talented fighter, his power at this level is iffy, and he hasn’t beaten anyone that will get anyone’s blood pumping necessarily. But what he represents is a lot of maturity. He knows who he is and what he needs to do. He’s competent and will be facing a much shorter opponent, where his boxing skills might surface to the top. He’s a by-the-book boxer who has been through a lot in his life, serving his country with honor.

Bet on who will win, what round and whether or not there’s a TKO >>> MyBookie

With Frampton, he will be facing a fighter who is natural at what he does. Frampton does not go by the book. He has his own book. Frampton flaunts an improvisational flair to his approach in the ring. A lot of his moves won’t be seen in any boxing instructional manuals, nor will they be endorsed by any conventional trainers. He sort of makes it up on the fly, but it has gotten him pretty far. Frampton was able to unify titles at 122 pounds while becoming the first and only fighter to defeat Leo Santa Cruz. In other words, he has hit some high notes that Herring will likely never reach in his boxing career.

I just think that Frampton’s shelf life was always meant to be on the shorter side. Fighters like him who rely on instincts and improv more than solid fundamentals don’t always age that well. Roy Jones comes to mind. When fighters like that start to see their reflexes ebb slightly, the winning formula is altered beyond repair. Frampton is still a young man at 33, but in the lower weight classes, not everyone is in their prime anymore at that age.

Frampton wasn’t able to duplicate his career-best form in the rematch with Santa Cruz, but he scored three nice wins before running into Josh Warrington in 2018 and dropping a unanimous decision. He returned late last year and scored a useful win over Tyler McCreary to get back on the winning track. And while Warrington is undoubtedly a good fighter and an unbeaten one, it’s not that crazy to think that Frampton from 2015-16 would have done a little better.

By the same token, Herring is nothing like Warrington, a shorter fighter who uses pressure and a high work-rate to stifle his foes. Without a whirlwind throwing punches in bunches, Frampton’s more measured punch-rate could resonate better. It could hurt as he will need to expend energy to get inside the much longer Herring, whereas the champion will be able to punch without having to work to do it. Still, Frampton doesn’t have to worry about a fighter throwing a ton of punches.

The supposed locale of this fight is a primary concern for potential Herring backers. While it’s not terribly difficult envisioning the southpaw using his range to edge out Frampton, how sure can we be he’d get credit for such a win? Not that Ireland has done much to make one suspicious, but this type of home-cooking goes on everywhere, and it’s just not easy to beat a championship-fighter in their backyard with a skill-set that isn’t built for domination.

Herring is a world champion. I don’t want to say anything that takes away from what he has accomplished. At the same time, with the proliferation of titles, it doesn’t mean what it once meant. In essence, Herring is a top-ten type of fighter—a good contender who isn’t really classified among the top 130-pounders in the world. I think Frampton has enough swashbuckling and flair left to edge a decision. I’ll take Frampton.

I’m betting on Carl Frampton at -115 betting odds. I think that even as he has perhaps lost a half-step, Frampton has enough in the tank to beat a competent professional who falls short of exceptional. Bet the Frampton/Herring fight for FREE by taking advantage of a massive 100% REAL CASH bonus where you can deposit anywhere from $100 to $300 and MyBookie will bonus you a matching amount! You must sign up through this link AND use bonus/promo code PREDICT100 in order to receive the bonus! Credit cards work well there!