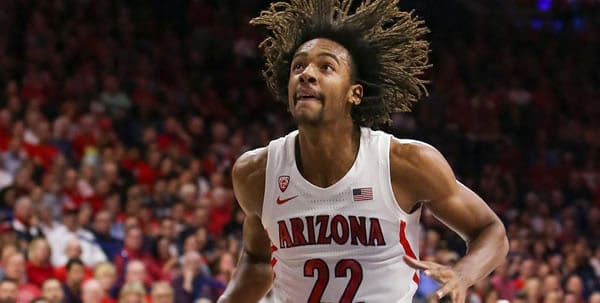 It’s rare for a win over a rival to feel like it was irrelevant, but it doesn’t feel like Arizona did much to stop the bleeding given that Arizona State sits near the bottom of the Pac-12. To really get back on track, Arizona is going to have to come out of this trip to the Oregons with at least a split, and the young Wildcats have a real chance to take down a top team on the first leg of this trip.

Zeke Nnaji has looked solid in recent games, scoring in double figures in each of Arizona’s past four games against power conference opponents and notching a double-double against both St. John’s and Arizona State. What’s more, he’s getting help from his guards, as Josh Green and Nick Mannion have also proven themselves as solid collegiate players and combined for 22 points against the Sun Devils. Arizona has a lot of good pieces and needs to show that it’s made that important step forward since the St. John’s loss. Beating the Ducks on the road would be an excellent start for that effort.

Oregon came out of the toughest road trip in the Pac-12 with a split, and now things should get a lot easier for the Ducks with most of their more challenging league games coming at Matthew Knight. One of those is Arizona, and the Ducks are actually catching the Wildcats at the perfect time for a couple of reasons.

The most important reason is that Payton Pritchard got going on the road trip, averaging 20 points in the two games. More important was that he was much more efficient in the Utah game, hitting half of his shots from behind the arc as opposed to going 1-for-6 at Colorado. Oregon’s offense depends greatly on Pritchard, and when he’s hitting and getting his points in an efficient manner, as happened at Utah, the Ducks are tough to beat. When he takes 18 shots to score 19 points, an Oregon win gets a lot more difficult.

To remedy that, the Ducks need more out of Anthony Mathis. Mathis went scoreless at Utah and had just seven points against Colorado. The Ducks don’t need him to lead the team in scoring, but 10 points a game would go a long way toward making the Ducks a more complete squad.

Youth. Does Arizona really know what it’s in for on this trip? The Oregon swing isn’t quite the Rocky Mountain road trip in the Pac-12, but with a resurgent Oregon State program playing well in Corvallis and the Ducks looking like a genuine Final Four contender, it’s become a rather tough stretch. Arizona has played one true road game all season at Baylor, and that game didn’t have the kind of crowd edge for the Bears that you might expect because Baylor was more concerned about its football team playing for the Big 12 championship that day.

Oregon’s fans won’t be distracted by football, and the freshmen-dominated Wildcats will face their first real road test against a crowd that is tough to face in the best of circumstances…and these are not the best of circumstances. The Duck fans want to get their team back on track after the loss to Colorado, and this is an excellent way for them to do it by rattling the Wildcats.

Arizona will Cover if:

The Wildcats can force the Ducks into bad shots from behind the arc. Arizona crushed Arizona State so easily in large part because the Wildcats forced the Sun Devils to shoot 3-for-21 from the perimeter. When there are a lot of missed deep shots, there are a lot of rebounds, and that’s precisely what happened in the 28-point victory. Oregon doesn’t have anyone who can quite match Nnaji on the glass, and if he can regularly grab the board and either get an easy putback or start a new possession when Arizona was on defense, the Wildcats will have a significant edge.

The Ducks can get off to a great start. If Oregon gets going from the beginning and puts Arizona in a deep hole, the Wildcats haven’t really faced adversity in a situation where the crowd is completely against them. Oregon has the talent to bury any opponent early. If the Ducks can get Pritchard and Mathis going early on, Arizona is going to have to quickly get adjusted to keep the game from getting out of hand. If the Ducks build an early lead, Arizona might not be able to come back.

I picked against Oregon at Colorado, and I give the Ducks a pass on that game because the Ducks do not ever win in Boulder. Oregon has had success against Arizona in recent years, winning three straight over the Wildcats in Eugene and winning three straight overall in the series. In fact, the three consecutive wins over Arizona is tied for the longest win streak the Ducks have ever had against the Wildcats, in large part because Oregon is a new power and has only recently established itself as a national brand, something Arizona did 30 years ago.

This Wildcat team is talented but young, and I don’t see them getting a result in their first Pac-12 road game, not against a team and crowd as strong as Oregon. Give me the Ducks to cover and make it four straight over Arizona.