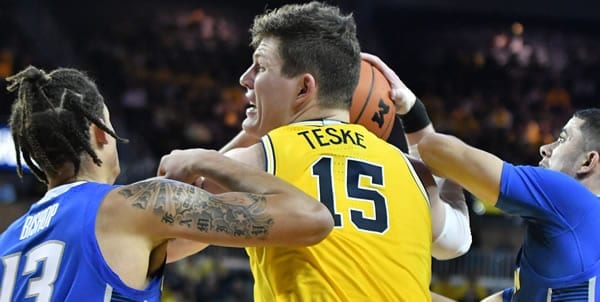 Is there a hotter team in the nation right now than Michigan? The Wolverines went to Atlantis and came home with the title by whacking North Carolina and Gonzaga in consecutive games after holding off Iowa State in the opener. Now they’re ranked fourth in the nation after being unranked, and they get to take their shot at the No. 1 team in the country. Michigan might be under the leadership of Juwan Howard now, but these are still the players that John Beilein recruited and coached for years, and that means that they still know how to play high-level defense. Michigan’s defense is rated 12th in the nation per Ken Pomeroy, and that might actually be a little low considering just how well the Wolverines clamped down on the Tar Heels and the Bulldogs, both of whom are top 20 offenses.

On the offensive side, Michigan has really benefited from the shooting of Isaiah Livers, who is hitting more than half of his 3-point shots. When he does miss, Jon Teske has been there to clean up the mess for the Wolverines, averaging 9.7 boards per game.

Find the Recommended Sportsbooks for bonuses, parlays and teasers and more!

Unlike Michigan, which had little to no expectations after losing Beilein to the NBA, Louisville was expected to be every bit as good as it’s been this season. One of the main reasons for the Cardinals’ success is the play of Jordan Nwora, who has been virtually unstoppable inside, averaging 21.9 points and 6.9 rebounds through the first seven Louisville games. What has really helped Nwora is the fact that he has a strong supporting cast behind him, as Dwayne Sutton and Steven Enoch both average more than 10 points and eight boards per game, while Ryan McMahon is an excellent deep shooter. Put simply, this team can really do a little bit of everything well, and it’s hard to find much of a weakness in their game. They rank in the top 10 nationally in both offense and defense, and they’re the only program in the nation that you can say that about. Louisville is the real deal.

The frontcourt. Can Michigan keep Louisville from pounding away on second-chance baskets? Teske is an excellent rebounder inside, but he’s only one player, and he’s the only one Michigan has who really excels on the glass. Louisville has Nwora, Sutton and Enoch inside, a combination that nobody has been able to match so far. Michigan either needs a career game from Teske or it has to find other ways to keep Louisville from extending its possessions.

The Wolverines can limit the Cardinals to one shot per trip. Louisville does not play anywhere near as fast as it did during the Pitino days, and under Chris Mack, the Cardinals have to rely on their efficiency. When scoring doesn’t happen right away, Louisville can struggle to keep everyone on the same page. Michigan has to make sure that becomes the norm.

The Wolverines don’t handle their first road game well. Michigan is a veteran team, but they have yet to face a hostile crowd under Howard’s leadership. Not only is it a question as to how well the Wolverines will respond, but it’s also uncertain as to how Howard reacts if his team runs into a tight spot on the road. Michigan is likely to handle it fine, but any slip up against a team like Louisville is essentially a death sentence.