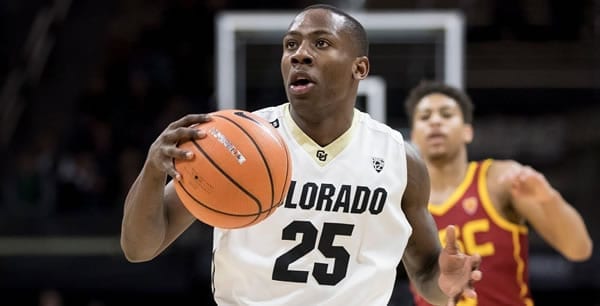 This is the big one for the Buffaloes, as they now have a chance to all but put the Pac-12 title to bed if they can get a win here. That would be a huge thing for the Buffaloes, who haven’t won a league title since 1969 and can essentially take a three-game lead with six games to play. However, to win this title, Colorado is going to have to get it done on the road, as five of its final seven games will be played away from Boulder.

To get it done, Colorado needs to keep getting quality production out of McKinley Wright. Wright has shown a propensity to step up when it matters most, as he scored 21 against Oregon in the teams’ first meeting, which matches his season-high in the conference. If he’s hitting, Colorado becomes a much stronger opponent. But an even better sign of Colorado’s chances is whether the Buffaloes can keep their opponent under 70 points. When Colorado holds the opponent under 70 in Pac-12 play, the Buffaloes are 7-0. When the Buffaloes give up at least 70, they’re a mere 1-3.

Is Oregon hitting a slump, or are the Ducks genuinely collapsing? Oregon is at the point where it has to get things back on track in a hurry because the Ducks are in danger of throwing away a high seed if they don’t get things turned around in a hurry. The good news for the Ducks is that now they come back to Eugene, where nobody has been able to beat them all season. But home-court really isn’t going to mean that much unless Payton Pritchard is able to get things turned around with his shot. The Ducks’ guard has kept up his point totals, but he’s had to take a lot more shots to do it as of late.

Against Oregon State, Pritchard shot 7-for-21 for the game and finished with 16 of the Ducks’ 53 points. That’s bad on two levels for Oregon, because not only does it show that Pritchard is struggling with his shot, but it also shows that nobody else is stepping up for the Ducks. Oregon has talent beyond Pritchard, but nobody else has shown a propensity to step up and make things happen. Either Pritchard has to figure out his shot, or Oregon is going to keep struggling.

Matthew Knight Arena. Visiting teams don’t often win in this series, as we touched on earlier this year when the Ducks went to Boulder and lost to Colorado. Actually, that’s kind of an understatement: the visitor is 1-16 all-time in this series and 1-12 since Colorado joined the Pac-12 in 2011. The only win for a visiting team came in 2013 when Colorado eked out a 48-47 win over Oregon in Eugene. Since that game, the Buffaloes have lost four straight at Matthew Knight Arena, and none have been particularly close, with the Ducks winning by an average of 19 points. Colorado has to get past the mental block that comes with playing in Eugene, something that Oregon tried and failed to do in Boulder

Colorado will Cover if:

The Buffaloes can play the kind of defense that has been their trademark throughout the season. Colorado’s defense is strong but inconsistent, and up until the Stanford win, Colorado hadn’t beaten anyone all year that had exceeded 71 points. Colorado’s game is not trying to outscore its opponents, and if the Buffaloes try to play too fast, they’re going to get beat. The Buffaloes need to embrace who they are and play tough defense for 30 seconds on each possession.

The Ducks can find their shots. Oregon didn’t shoot well at all from behind the arc in Boulder and still only lost by nine, which says that the Ducks could have won the game if they had hit even close to a respectable percentage. Instead, Oregon shot a mere 16.7 percent from the arc and never got going in their nightmare building. If Pritchard can get free and start hitting, this will be the Ducks’ game to lose.

There’s a lot to like about what Colorado has done this year, and it would be a great story if the Buffaloes are able to win the Pac-12. But I don’t think that Colorado’s going to get it done in a building that has tortured them almost as much as its building has tortured Oregon. There’s a lot of worry about Oregon’s shooting at the moment. However, there’s just as much concern about the Buffaloes defense that gave up 72 to UCLA and 74 to Stanford at home.

Besides, the Ducks really need to get some momentum going in their direction a lot more than Colorado needs to win this game, and they’re likely to have a fired-up crowd behind them. Give me the Ducks here. Bet this game and ALL your sports bets at discounted odds -105 instead of the spendy -110 that you’re laying by making the switch to 5Dimes! Wagering at reduced odds will save you tons of money, PLUS, it’s a much better sportsbook with more options than what you’re geting! Click here to start betting smarter today!