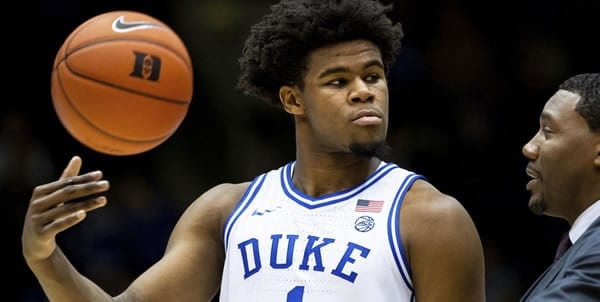 Boy, does Stephen F. Austin feel like forever ago? Duke has been a different team since the second half of the Virginia Tech game, winning its past four games by an average of 31.5 points. A large chunk of that is because this Duke team has finally locked in on the defensive side of the ball. The defense has long been a hallmark of Mike Krzyzewski’s squads, but for the first month of the season, the Blue Devils were allowing the likes of Georgetown and Winthrop to keep up with them and only won those games by outscoring them with a potent offense.

Not anymore. Since the Michigan State game, nobody has broken 63 against the Blue Devils, who have kept their foot on the gas while suffocating their opponents. Duke has hit 86 points in three of their past four, two of which were against ACC opponents. The Blue Devils are locked in pretty solidly, and Krzyzewski clearly has his team’s attention at the moment. He also appears to have a pair of genuine stars in Vernon Carey and Matthew Hurt. Hurt, in particular, is seeming to blossom at the right time, as he’s shot better than 60 percent in three of Duke’s past four games. He needs to look for his shot more with the way he’s shooting, but right now, things are looking great for the Blue Devils.

Boy, did Tech need that game. North Carolina is in free fall right now, but Georgia Tech has shown an ability to lose to the likes of Ball State at home, so getting a win in Chapel Hill is enormous for the Yellow Jackets, even if it came against a collapsing team in Carolina. So was the fact that Tech did it without getting much from Michael Devoe, who has been the main man for the Jackets this year. Devoe played for much of the game as usual, but he only scored four of Tech’s 96 points in the win.

Part of the reason why Tech won anyway was that Jose Alvarado stepped up. Alvarado has been out with injury for much of the first part of the season, but he and Jordan Usher are both available now, and both average around 10 points per game. Getting another scorer going would be huge for the Jackets.

Depth. To put it lightly, Tech has been one of the thinnest teams in the ACC and perhaps the country for much of the season. Up until Alvarado and Usher got healthy, the Jackets were playing with a seven-man rotation, which really cost them in the Arkansas game. Tech had every chance to pull out a win that would have looked pretty impressive, but the Jackets had nothing left and couldn’t close the game out. They now have nine players in their rotation, but they’re still at a disadvantage against Duke, which has ten players who play significant minutes. Can the Jackets avoid getting gassed against the Devils?

The Blue Devils can force Tech away from the interior. The Jackets are at their best when they’re able to shoot makeable mid-range jumpers, as they don’t shoot the 3-pointer well. That’s a real concern against Duke, which has started to establish itself as a top rebounding team. If Tech can’t get good shots, there are likely to be a lot of rebounds to grab, and most of them are going to end up going to Vernon Carey. The Blue Devils simply have to play the kind of defense they’ve played for a month, and they’ll control this game.

Georgia Tech will Cover if:

The Yellow Jackets can force Carey to try to win the game from the free-throw line. This is the old strategy that ACC teams would try against Tim Duncan and Wake Forest in the 1990s when it became clear that Duncan was unguardable from inside three feet. Back then, there was no charge circle, so teams could try to get Duncan to commit an offensive foul as plan A. Failing that, they could instead foul him and force him to try to score from 15 feet instead of three. Tech used this strategy to significant effect against Carolina and its center, Garrison Brooks, and the Jackets might do the same to Carey, who only shoots 62 percent from the stripe and could struggle again if forced to get his points at the line.

A win over North Carolina is nice, but I think that’s more the Tar Heels coming apart at the seams than it is the Jackets taking any real step forward. The fact is that Duke has been playing great basketball for a month, and Tech is still the same team that managed to lose by 19 at home to Ball State. No disrespect to the Cardinals, who are a solid MAC squad that might win that conference, but no ACC team should ever be losing by nearly 20 points to a member of the MAC. The Jackets still have a ways to go to get to the level Josh Pastner wants them to be at, and any team that can lose to Ball State by 19 is perfectly capable of doing the same or worse against Duke.

There’s no need to overthink this with how well Duke is playing right now. Give me the Blue Devils. Bet this game for FREE by taking advantage of a special offer we arranged with one of the best college basketball betting sites on the web: “Deposit $100 to $300 and get a matching 100% REAL CASH bonus” at MyBookie! (Must CLICK HERE to sign up and must use bonus promo code: PREDICT100)