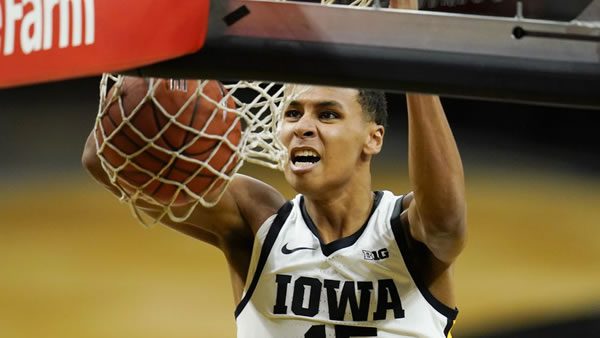 Any doubts about Indiana making the NCAA tournament are now long gone, as the Hoosiers got the two wins they needed to lock up a spot in the Big Dance for the first time since 2016. The question now is whether Indiana is satisfied with making the tournament or whether it’s focused on trying to win the Big Ten tournament for the first time in program history. The Hoosiers haven’t even played in the Big Ten tournament final since 2001, their only appearance on the final day since the event was created in 1998.

Iowa’s also trying to end a long drought, as the Hawkeyes haven’t played for a Big Ten tournament title since beating Ohio State for the crown in 2006. But after three of the top four seeds in Indianapolis went down on Friday (Purdue was the only higher seed to survive the Big Ten quarterfinals), the door is wide open for someone to claim a Big Ten title and go into the NCAA tournament with some momentum and a higher seed.

Trayce Jackson-Davis is playing his best basketball right now, and that’s a major problem for Indiana’s opponents. The Hoosiers still don’t have a heck of a lot of depth beyond Jackson-Davis, Race Thompson, and Xavier Johnson, but when Jackson-Davis plays as he has for the first two days in Indianapolis, you can survive without it.

It also didn’t hurt that Indiana played excellent defense against Illinois, holding the Fighting Illini to just 35.7 percent from the floor. But as great as all of that was, none of it will matter against Iowa if Indiana doesn’t take much better care of the ball than it did in Iowa City. The Hoosiers lost that game to Iowa because they turned the ball over 23 times and allowed the Hawkeyes 10 more looks at the basket, resulting in a nine-point loss. Indiana was much better with the ball against Illinois, only turning it over seven times on Friday. The Hoosiers have to make sure the ball gets to Jackson-Davis on a regular basis to get their third straight win.

With how fast Iowa plays, it’s easy for a team to get overwhelmed by the Hawkeyes’ tempo. Iowa did it again to Rutgers despite a slow start, as the Hawkeyes quickly turned the game around and flipped a small deficit into a double-digit lead before the Scarlet Knights even had a chance to breathe.

So far, Keegan Murray has been the model of consistency in Indianapolis, scoring 26 points in both of Iowa’s games against Northwestern and Rutgers. Against Indiana, he wasn’t very effective, scoring just 12 points, but Kris Murray more than made up for it with 29, which underscores just how dangerous Iowa can be. When everything is clicking, the Hawkeyes can run away from a lot of teams, and unlike in previous seasons, Iowa actually plays some defense and doesn’t just let opponents put up boatloads of points.

Indiana will Cover If: The Hoosiers can get the ball where it needs to go. Jackson-Davis is likely to keep up the scoring at a high level, but only if the Indiana guards can avoid the mistakes, they made in Iowa City. If he’s able to control the interior, Indiana will be in great shape. Iowa will Cover If: The Hawkeyes can get out and run again. Indiana might not be so eager to run in game No. 3 after having to pull off a comeback against Michigan and then battle Illinois. Iowa can run all day, and the Hawkeyes need to get off to a hot start and take the pro-Indiana crowd out of the game. The best thing Iowa can do in this game is get control early and get the Purdue fans in the building on their side.

I am more cautious than I normally would be for an Iowa over because these teams are on their third game in three days, but I still think this number is too low. I like these teams to put up some points.

I think Iowa is the better team and will emerge victorious, but I don’t think they’re six points better than Indiana. Every lower seed covered in Indianapolis on Friday, and the higher seed is a mere 2-8 ATS in this tournament, with only Minnesota and Northwestern failing to cover as lower seeds.

I think Indiana keeps that trend going. I’m going to back the Hoosiers with the points.