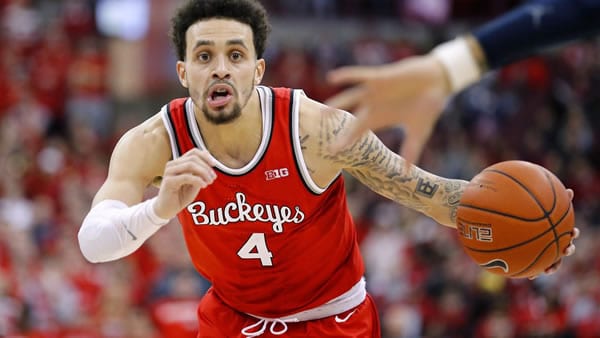 Could the Big Ten get two No. 1 seeds in this year’s all-Indianapolis tournament? It’s starting to look that way, given Ohio State’s performances, as the Buckeyes have won five straight and are looking like the only team in the league who can genuinely challenge Michigan for conference superiority.

Indiana is far more worried about whether it’s going to be playing in its home state once March rolls around, as the Hoosiers are still missing a couple of wins from their profile in order to feel safe about their chances. Indiana nearly gave one away against Northwestern, which would have been a devastating defeat, but the Hoosiers managed to survive and avoid that landmine. The good news for Indiana is that the Hoosiers only play resume-boosting teams from here on out, but the bad news is that other than Iowa, Indiana hasn’t been able to beat any of them. Can they finally get the win they need to feel secure about their chances?

Close calls have been the story of the season for Indiana this season. They’ve lost in overtime to Florida State, double-overtime to Wisconsin, overtime to Illinois, and by four at home to Rut-gers. Only Texas has truly hammered Indiana all season, and the Hoosiers have actually been a relatively solid road team, as they’ve only lost once in regulation on the road all season.

But therein lies the problem: Indiana has taken a pair of overtime losses against ranked teams on the road, and other than Iowa, the Hoosiers’ best win away from Bloomington was over a middling Stanford team. The Hoosiers’ best true road win besides the Hawkeyes came at Ne-braska, which hasn’t beaten anyone in the Big Ten all season.

To earn a win here, the Hoosiers need to get a strong game out of Trayce Jackson-Davis. Ten points in 43 minutes of action simply will not cut it, nor will a 22-for-62 shooting performance. Getting 24 points from Al Durham is nice, but Jackson-Davis is simply the most talented big man in the league besides Luka Garza and Kofi Cockburn, and he needs to show the consistency that should come with being No. 3 in a league as deep as the Big Ten.

Here’s a big reason why Jackson-Davis needs to be on for the Hoosiers: because if he isn’t, E.J. Liddell will punish the Hoosiers inside. Liddell and Duane Washington have formed an effective inside-outside combination as part of an Ohio State attack that’s capable of winning at both slower paces and breakneck speed.

Against offense-heavy Iowa, the Buckeyes were able to keep their noses in front in an 89-85 contest, mainly because Liddell, Washington, and Kyle Young all ended up with 16 points. When Ohio State played defensive-minded Maryland, the Buckeyes adjusted well to the Terrapins’ style with lockdown defense of their own, which worked well because Ohio State will not beat itself with turnovers.

Where the Buckeyes get into trouble is that they aren’t great deep shooters, so if a team can force them to the outside, they could really struggle. But for the most part, that hasn’t really happened.

Desperation. Indiana has to have a signature win besides Iowa, as the Hawkeyes are fading fast and look like they’ll be closer to the five or six line than the two or three. Ohio State is peaking at the right time and looks like a genuine contender for a one or two seed, which would be huge for Indiana’s chances. There are no bad losses in the Big Ten this year except for Northwestern and possibly Penn State (nobody has lost to Nebraska, but that would definitely count if the Cornhuskers ever win a conference game), so Indiana only needs to get a win or two to push a decent profile over the top. Ohio State has to match that fire.

Jackson-Davis can make himself big inside and force Ohio State to go to the outside. The best way to beat the Buckeyes is to give them the three and dare them to shoot. It can lead to disaster in a hurry if Ohio State is on, but this team only shoots about 35 percent from behind the arc. With Jackson-Davis inside to clean things up, Ohio State isn’t likely to get a lot of rebounds if it settles for deep shots.

The Buckeyes are locked in and focused from the tip. Ohio State has not always been a consistent squad, as it tends to follow a strong performance with a middling one. That could be because of the quality of the opposition, as the Big Ten is loaded, but it’s definite-ly a concern. Ohio State hasn’t had a cover streak longer than three games this year, and the sharp performances have to end at some point.

Even though Indiana badly needs this game, I think Ohio State is the sharper team and should come in solid in this matchup. The Buckeyes are surging when it matters most, and the Hoosiers are still trying to find their footing against non-Iowa opponents. I’ll give the points with Ohio State here. Bet this weekend’s college basketball picks for FREE by taking advantage of a 100% real cash bonus offer on your first deposit of $100 to $300 at MyBookie Sportsbook! (Must use PREDICT100 as promo/bonus code on their registration page in order to have the bonus credited!)