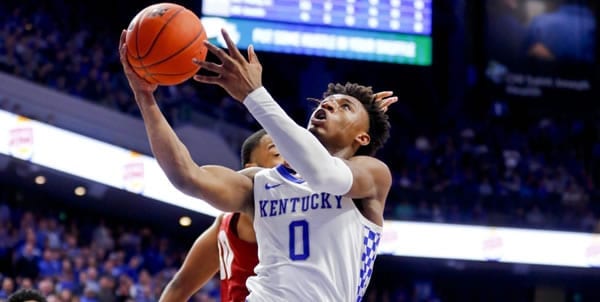 If not for the defense, things might have gotten really ugly for Kentucky against Mississippi. The Rebels are a lot better than their record suggests, but there’s no reason that Kentucky should be locked in a tight battle with Kermit Davis’ crew in Lexington. Or there wouldn’t be if Ashton Hagans was playing like himself, but the point guard isn’t. Three assists and four turnovers are not something an SEC program — especially one with Kentucky’s pedigree — should ever have from its point guard, and Hagans compounded matters by fouling out down the stretch.

What saved the Wildcats was the defense and the inside game, as Nick Richards has really made himself a presence in recent games. Kentucky has been doing just enough to get the job done, which isn’t great as far as betting goes, but is excellent for their bottom line. However, Kentucky has done the job well on the road as of late: the Wildcats covered in each of their past two road games.

LSU isn’t playing well away from home as of late, but the good news for the Tigers is that they’re back at home, which has been a real fortress for the Tigers this year. However, LSU’s most recent home game brought in some new questions, as the Bayou Bengals barely managed to survive against a mediocre Missouri squad and gave up 78 points to a team that averages under 65 points a game. What’s kept LSU going is that it’s been able to count on quality play from its offense, as Skylar Mays and Javonte Smart have proven sharp shots and great leaders. In fact, every LSU starter shoots it pretty well, with Smart the only one of the Tigers’ six leading scorers under 49.6 percent.

That’s what’s led LSU to score 80 or more points in all four of its most recent games, but the defense has been the significant liability. In three of those games, LSU gave up at least 88 points, and all three of them predictably ended up in the loss column.

The SEC race. LSU is the defending SEC champion and will be looking to keep the title in Baton Rouge, but the Tigers have to pull out some big wins to make that a reality. If LSU stumbles here, the Tigers will be two games back of Kentucky with five to play, and they’ll have to make up three on the Wildcats because Kentucky will own the tiebreaker on them. For the Wildcats, the task is a simple one. Run the table, and they’ll be the league champs, and except for a return game with Auburn, the rest of the schedule is pretty manageable. This is a game where both teams will be hyped, and whichever one settles down quicker is going to be in good position to pick up the win and increase their chances of claiming the crown.

The Wildcats can get a monster game out of Richards. Rebounds might be at a premium in this game given how well LSU shoots, but if Kentucky can get an edge on the boards and make sure that it limits the Tigers to one look at the basket, it will have a significant edge. The way that the Wildcats can do that is to take care of the glass and use their size advantage.

LSU will Cover if:

The Tigers can play tough defense on the perimeter. Kentucky does not shoot the ball well from deep, and LSU needs to make sure that stays true in this game. If the Wildcats get hot, there’s little reason to expect LSU to be able to hang with them, given how little defense the Tigers actually play. LSU has to play just enough defense to keep Kentucky off balance and give its shooters a chance to take over.

Honestly, I don’t love how either team is playing right now. LSU has really struggled as of late, but Kentucky has also looked anything but itself unless it was playing Tennessee or Vanderbilt, neither of whom have been all that effective at anything this season. Granted, LSU lost to Vanderbilt, so the fact that Kentucky beat the Commodores twice has to count for something. So does the fact that LSU won this game last year on a controversial play, leaving Kentucky staring up at them in the SEC standings.

I think Kentucky wants to even the score from that game, and I think that they’ve got the stronger outfit and can do precisely that. Give me the Wildcats to get the win straight up in this game.

Los Angeles own a significant advantage in the pitching match-up and edges with both the sticks and in the bullpen, so we obviously like the Dodgers here. But that spread is too much. So we’ll give the run and a half and play LA against the MLB run line.