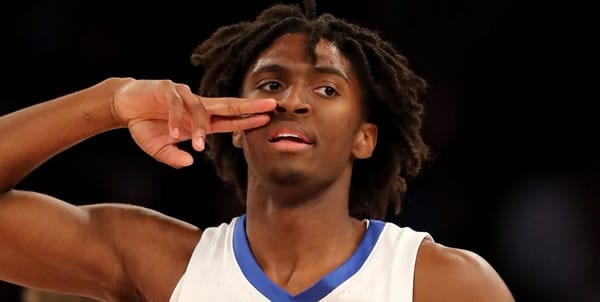 Take it from someone who watches a lot of Kentucky basketball: the Wildcats can be a very irritating team to gamble on. Kentucky has done quite well against the spread as of late, winning five of its past six ATS, but the Wildcats have pushed the line very close before making the plays they need in order to land you the cover. That’s just part of what happens with young players, and a John Calipari team is going to be loaded with freshmen in this day and age. It’s par for the course for the Cats.

But here’s the thing about that: Those frustrating Kentucky performances have all come at Rupp Arena. For some reason, when you get Kentucky out of Lexington, you actually make the Wildcats more dangerous. Kentucky has played eight true road games this season and is 6-2 both SU and ATS in an opponent’s building. They’ve covered four of their past five away from home, and although they were the underdog in three of them, they won the game outright in all three of those situations. That showed that their stellar record against the number is far from just a product of getting points on the road against good SEC opponents. This Wildcats squad can genuinely play away from home.

Someone must have told Texas A&M that it’s now or never if it wants to be playing postseason basketball after the SEC tournament because the Aggies are suddenly on a hot streak. A&M hadn’t beaten anybody all month except a terrible Missouri squad, but they picked up a home win at Georgia to start a three-game surge that included a win at Alabama and a home win over Mississippi State by double digits. There’s not a lot of time left in the season, but now the Aggies are reasonably thinking NIT, which gives them something to shoot for after a long season.

One of the reasons why the Aggies are making real progress is the improved play of forward Josh Nebo, who is both the team’s leading scorer and its second-leading rebounder. Nebo is a solid and experienced player, but he’s got to improve the rebounding over where it was in the Mississippi State game. One rebound simply isn’t going to cut it against the likes of a Kentucky squad that’s been playing pretty darn well as of late.

Tempo. Kentucky doesn’t love to push as much as it has in recent years, but Texas A&M likes to slow things down, perhaps because first-year coach Buzz Williams knows he doesn’t have a great team yet and can’t play at a fast tempo for the bulk of the game. However, A&M handled the speed well enough to get a win at Ala-bama, which has been one of the fastest offensive units in the nation.

This game will have a lot to do with which team is able to play at a pace that’s comfortable for its skills. If Texas A&M can slow the game down and play the way it likes to play, it’ll need to make sure it’s efficient on each possession. If Kentucky can deny the Aggies, a slow speed could play right into the Wildcats’ hands.

The Wildcats can keep getting offense out of Immanuel Quickley. Kentucky has plenty of offensive weapons, but Calipari clearly believes Quickley is the key to making the Cats a special team. Prior to the win over Florida, Calipari told Quickley in no uncertain terms that if he didn’t start taking shots when he was open, he was heading to the bench. Quickley scored 26 against the Gators and was the main factor in keeping the Wildcats in control of the game even as Florida tried to cut into the deficit. If Quickley can become a consistent scorer, UK will be tough to beat.

Texas A&M will Cover if:

Nebo can hold his own with Nick Richards in the paint. If Nebo wants to keep his career going into March, the Aggies are going to need him to be at his best. He’s been playing well as of late, but he hasn’t gone up against the likes of Richards, who leads the SEC in field goal percentage and ranks third in the league in rebounds. Nebo doesn’t have to win the battle with Richards, but he does need to keep him from taking over the game, a doable ask.

The Aggies are playing better than they have been and have picked up a cou-ple of solid wins. But with no disrespect to Alabama and Mississippi State, the Wildcats are a totally different beast. I don’t buy that three wins over a few lesser opponents are a sign that Texas A&M is ready to compete with solid programs.

There’s a big difference between staying competitive and actually getting a result, and I don’t want to go against Kentucky with how well the Wildcats have been finding their way to the right side of the line. Ken-tucky might be frustrating to bet on, but it’s returning at a very solid clip for bettors. Give me the Wildcats here.