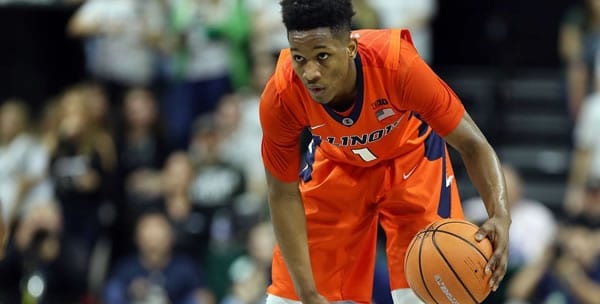 Statistical socialism isn’t always the way to go in college basketball, but it’s working well for this Michigan squad. The Wolverines have had the approach that everyone is equal, and the points can come from anywhere on any given night, and the results have worked pretty well. Michigan has proven especially adept at hurting teams from the perimeter, as it ranks 21st in the nation in 3-point percentage.

That’s a much different challenge than what Illinois faced at Maryland, as the Terrapins do not shoot the three particularly well, a big reason why Maryland fell in a deep hole against the Illini. No such luxury exists with Michigan, as Isaiah Livers, Zavier Simpson, and Eli Brooks all shoot above 40 percent from beyond the arc. The Illini will also have to find a way to get in Simpson’s passing lanes, as the senior ranks second in the nation in assists. Last year, Illinois couldn’t do it, as Simpson scored 16 points and notched eight assists in a 79-69 Michigan win.

Kofi Cockburn is proving to be a talent along with his size at center, as the 7-foot freshman leads the Illini in both points and rebounds, averaging a double-double to this point. Cockburn grabs roughly one of every four Illinois rebounds, a staggering number for a team that averages 43 per game. Beyond him, the Illini are the kind of team that’s built around getting the ball inside and making things happen there, as opposed to hitting the deep shot. The only one who really shoots the deep ball well is Trent Frazier, and he doesn’t shoot it enough to warrant serious concern about Illinois’ 3-point ability.

This is a team that’s built around getting the ball inside and cleaning up its mistakes on the glass. The way you beat Illinois is to limit them to just one shot per trip, a task that’s far from simple

League play. This is the last Big Ten game these teams will play until January, and getting off to a 2-0 start would be huge for Michigan’s chances to win the league, especially with Maryland now carrying a loss to Penn State. Conversely, it’s critical for Illinois’ chances to be a bubble team in March. The Big Ten looks like it’s going to offer four opportunities for a signature win this season: Maryland, Michigan, Michigan State, and Ohio State, with Penn State a maybe. Illinois has already watched one of those opportunities slip away, and considering it won’t get a shot at Ohio State or Penn State at home; this is one of only three chances to record an impressive win in the comfort of Champaign. It’s only December, but that’s a pressure situation.

The Wolverines’ shooting from 3-point range is accurate. Michigan cannot shoot the way it did at Louisville and hope to win this game. Illinois rebounds too well for that, and if the Wolverines shoot 16 percent from the arc as they did against the Cardinals, the Illini will win by 20. Michigan has to shoot around its regular percentage by getting good looks and hitting them when they’re open. That wasn’t a problem against Iowa, but the Illini do play better defense than the Hawkeyes.

The Illini can make themselves big on the glass. Michigan has some players who can rebound, notably Jon Teske, but Illinois has made rebounding an art this season. In fact, the Illini lead the nation in rebounding margin because of how well they use their height inside. Through nine games, Illinois is averaging 15 rebounds a night more than its opponents. The Illini have to extend possessions in order to grab the win.

Before yesterday, I was ready to go ahead and take Illinois. After all, you’ve got a chance to grab a fired-up team at home, and you’re getting points in the process after they just played the No. 4 team in the nation to a single point on the road.

But then Maryland went out and played, and this time it didn’t overcome the slow start and lost to Penn State. What does that tell us? It says that Illinois’ tight battle with Maryland has a lot more to do with the Terrapins’ inability to get out of the starting blocks than it does the Illini’s ability to be a top-tier Big Ten squad. Michigan has shown no such difficulty this year and should find this opposition much more to its liking as compared to the tight battle that it faced at Louisville in its first true road test.