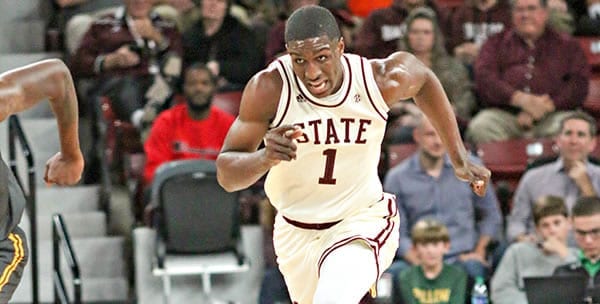 Talk about rising from the grave. Mississippi State got off to an 0-3 start in the SEC, but the Bulldogs have become a viable bubble team by ripping off five straight wins in the league. The main reason is the scoring of Reggie Perry, who has been getting and hitting his shots as of late. Over the Bulldogs’ past five league games, Perry has averaged just over 24 points a game, and he’s done it by hitting roughly half his shots from the floor.

The one game the Bulldogs have lost in that stretch was a nonconference game at Oklahoma, and it underscored just how critical Perry is to the Bulldogs’ success. Perry ended up playing a mere 24 minutes because he committed four fouls, and the Bulldogs fell to the Sooners because Perry scored just seven points. The only other game in 2020 where Perry has played less than 25 minutes was when he fouled out at Alabama — and the Bulldogs lost that game by 21.

John Calipari isn’t happy, and that’s not surprising given how things turned out in Kentucky’s last game against Auburn. The Wildcats got pushed around by the Tigers, and it wasn’t particularly close, as Kentucky got outrebounded 42-28 by Auburn. Last year, Kentucky used to be the team that nobody outrebounded, but Auburn wasn’t afraid of the Wildcats and had no problem dominated the glass.

But the main reason that Calipari isn’t happy is because Mississippi State is perfectly capable of doing the exact same thing to Kentucky that Auburn just did. The Bulldogs happen to be the SEC’s second-best squad at rebounding, and if Kentucky isn’t grabbing boards, the Bulldogs have the ability to pound away and minimize Kentucky’s possessions. The Wildcats also won’t be scoring many points if they aren’t grabbing boards — and they certainly didn’t against Auburn, as 45 of their 66 points came from two guards, Immanuel Quickley and Tyrese Maxey.

Rupp Arena. Actually, just facing Kentucky has been a real mental block for Mississippi State, which has lost 13 consecutive games to the Wildcats. But going to Rupp represents a double block for the Bulldogs because Mississippi State hasn’t shown much outside of Starkville. Of those five straight wins in SEC play, four of them came at Humphrey Coliseum. The lone exception was Florida, and the Gators blew a 17-point lead to make that win possible. Mississippi State’s only other road win all season is Coastal Carolina, which isn’t exactly the kind of victory that impresses the selection committee. This would be a significant coup for the Bulldogs if they can finally end their horrible history against Kentucky and get a critical win. But do they have the mental fortitude to get a win outside of Starkville? The answer will go a long way toward deciding if they can cover.

Mississippi State will Cover if:

The Bulldogs own the boards. Mississippi State’s best chance to get a win is to own the paint the way Auburn did, and the Bulldogs have the personnel to do it. If they’re able to win the battle of the boards by as much as the Tigers did, it won’t matter if Kentucky shoots better than Mississippi State did.

The Wildcats can get Reggie Perry off the floor or put a stop to his scoring. Kentucky has to find a way to slow down Perry if it’s going to cover here. If the Bulldogs’ star gets going, it’s going to be very difficult for Kentucky to keep pace unless it can rebound the ball or shoot even better than it did against Auburn — neither of which is particularly likely.

It’s tough to pick against Kentucky at home, but Mississippi State has the right kind of personnel to take advantage of the Wildcats’ weaknesses and take control of the game. I’d be lying if I said I wasn’t very concerned about Mississippi State’s struggles away from Starkville and the potential mental block with Kentucky. Still, I think that the Bulldogs can keep Kentucky off the glass well enough to take the crowd out of the game and take control of the situation. Give me Mississippi State in this matchup. Bet this game and all your sports bets every day at -105 odds! This will save you TONS of money! Find these huge savings at 5Dimes Sportsbook!