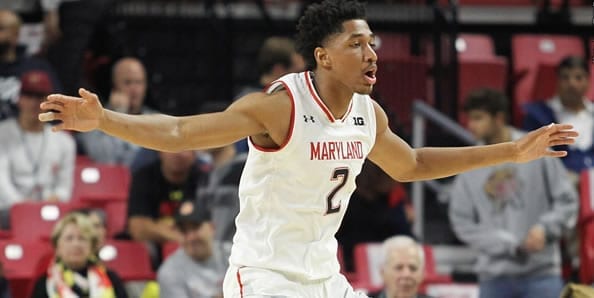 It feels like Maryland has been struggling, but that’s because the Terrapins have simply been getting the job done in close games against supposedly lesser competition as of late. Maryland has won five in a row and pulled itself into a first-place tie in the Big Ten, mainly by getting the job done at home. The Terrapins now enter what might be the toughest eight days of the season, as they’ve got their toughest two trips in the league in Illinois and Michigan State coming up, with a home game against Nebraska thrown in.

(Pause five seconds for the sheer lunacy that is Maryland playing a home conference game against Nebraska. This will never make sense, Big Ten. Thank you.)

Anyway, Maryland has gotten to this point by getting the job done in the second half. The Terrapins have been a slow-starting team all season, but when you have Anthony Cowan and Jamar Smith, it doesn’t matter how slow you start. Smith, in particular, has been a warrior for the Terrapins as of late, as he’s sat for all of 15 minutes in Maryland’s past five games. The one big worry for Maryland is that if one of their big guns doesn’t produce, there’s no reliable third option. Aaron Wiggins has shown flashes of getting the job done when needed, but he isn’t consistent enough for Maryland to count on him. Really, the third leg for Maryland is its defense, which ranks fifth in the nation in efficiency.

However, Cockburn and Ayo Dosunmu never really got going against Iowa, with Cockburn in particular outplayed by Iowa’s big center, Luka Garza. Maryland presents its own challenge in Jamar Smith, who won the battle between the bigs last time and has the potential to keep the Terrapins on the Illini’s level on the glass. Illinois needs its stars to play like stars.

The interior. I touched on this already, but Cockburn vs. Smith is going to go a long way in deciding which team comes out on top. When the teams met in College Park, Cockburn found himself on the bench with four fouls and was only able to play 21 minutes. Smith did not find himself in foul trouble and was able to collect 13 rebounds while scoring 14 points, which allowed Maryland to keep pace on the boards and overcome the Illini’s first-half advantage. Cockburn has grown a lot since that December matchup, and he’ll be eager to redeem himself after losing the battle to Garza last time. If he can get the job done inside, Illinois is going to have a considerable edge.

Cowan can find his shots. The senior didn’t come out for a second against Illinois when the teams met at College Park, and Maryland needed him badly, as he scored 20 points in the one-point escape. Illinois is likely to be all over him in this matchup, and Cowan has to play like a senior to give his team a real chance to get the job done.

Cockburn can stay out of foul trouble. The Illini are likely to build a lead in the first half because that’s what Maryland does on the road everywhere but Bloomington, Indiana. The Illini have the right kind of personnel to be able to keep that lead and make it stand up from start to finish, but only if Cockburn is able to stay on the court and keep his team from falling in a deep hole. If he finds himself in foul trouble, this will be Maryland’s night.

Lost in Maryland’s impressive record is the fact that the Terrapins haven’t done all that much away from College Park this season. Maryland has a 2-4 record in true road games, and of the two wins, one was Northwestern, which is 1-10 in the league and might lose every game left on its schedule. The other was Indiana, and that only became an escape because the Hoosiers managed to play carelessly enough over the final 90 seconds to blow a six-point lead and let Maryland leave with a one-point win. Otherwise, the Terrapins have lost to Penn State, Seton Hall, Iowa, and Wisconsin away from home, and all of those teams are likely going to hear their name on Selection Sunday.

Illinois is part of that group and has made the State Farm Center a fortress in Big Ten play. The Illini easily handled Michigan when the Wolverines looked like a national championship contender. Slammed Purdue and edged Rutgers and Minnesota along with Northwestern (why exactly have both of these teams had issues with Northwestern? Question for another day), which is why they’ve risen to first place and have a chance to really take control of the league this week.

Plus, this is the kind of game that the Orange Krush has been waiting forever since Brad Underwood took the reins in Champaign. Illinois has a proud basketball history and finally has a team to match it, and I think that the atmosphere will be too much for Maryland. Give me the Illini for the cover, and I’ll take the under as well. Bet your college basketball picks for FREE this week by taking advantage of a 100% REAL CASH bonus offer from one of the web’s best sportsbooks! Deposit $100 to $300 and they’ll match you dollar for dollar! Click here to sign up and must use bonus code PREDICT100.