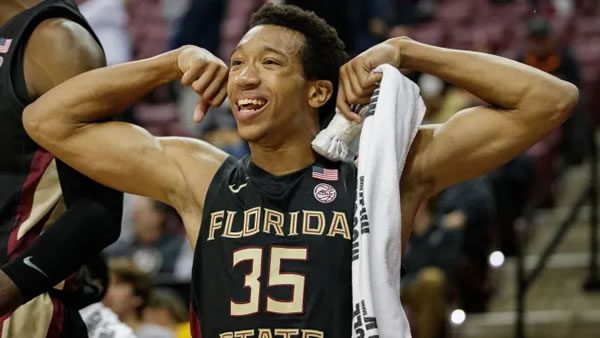 On the one hand, if you had told Notre Dame a month ago that it would be playing for its NCAA tournament life against Florida State in Tallahassee, the Irish would have gladly taken it. After all, the Irish were once a 14-7 team in a down ACC, which frankly meant they would be fortunate to even be in the conversation to make the tournament.

But now that that game is here, it’s one of major concern for the Irish because the Seminoles have proven just good enough to be the type of team that can cause a major surprise, yet not good enough to be considered a Quadrant 1 win. Instead, this is a Quad 2 game for the Irish, not quite good enough for them to get much benefit out of getting the victory and plenty damaging to a bubble profile should they lose.

And with Florida State, defeat is always a possibility. The Seminoles have been a wreck for most of the season because of injuries, which have crippled them in three of their past five contests, all of which were losses by 16 or more to Boston College, Duke, and North Carolina. But the other two were a pair of one-point wins over Clemson and Virginia, and the Seminoles do own one win over Duke this season, making this very much a trap game for the Irish.

When Notre Dame comes out and shoots 57% from behind the arc, you’re going to have to be a heck of a lot better than Georgia Tech to reasonably hang with the Irish. The Fighting Irish straight up blasted the Yellow Jackets, a good sign for a team that needs wins and can’t really afford to be wasting time in the muck against lower-tier ACC squads.
The biggest thing right now for the Irish is making sure that they don’t take a bad loss, and unfortunately for them, that really means a loss to anyone worse than Virginia Tech. The main thing Notre Dame has going for it is its dominant shooting on the arc, which might not be 57% most nights but can usually be close to 40%. Dane Goodwin and Blake Wesley can stroke it from deep on a regular basis, and that needs to continue.

Florida State really should be coming off four straight losses, but for a fantastic performance from Matthew Cleveland that included a 3-pointer at the buzzer to lift the Seminoles past Virginia by a point. That could have Florida State a little overrated in this situation, as the Seminoles really didn’t deserve to win that game, but the public only sees the improvement in their record.

But what the public doesn’t consider when betting is that Florida State’s trio of Caleb Mills, Cleveland, and Malik Osborne has been reduced to Cleveland by himself. Osborne has been out since early February with an injury, and Mills is listed as doubtful for this game, taking Florida State’s leading rebounder and scorer, respectively. With the Seminoles’ current lineup, there’s little to suggest that anyone else is even looking for shots other than Harrison Prieto, as the rest of the Seminoles seem to just expect that Cleveland will handle that part of the equation. The good news for the Seminoles is that they’ve been much more collectively responsible for rebounding, grabbing 13 offensive boards against Virginia in the win. That and improved 3-point defense are musts against the Irish.

Notre Dame will Cover If: The Irish can find the open spots in the Florida State defense and make some shots. FSU is not strong on the arc, and once the Irish get into a rhythm, it’s tough to knock them out of it. Plus, with the Seminoles’ health issues, if Notre Dame gets going early, it could spell a quick end for Florida State.

Florida State will Cover If: The Seminoles can survive the opening 10 minutes. Whenever you’re a shorthanded team with little to play for, getting through the first 10 minutes of a game is always critical. When you don’t have anything to play for, and you’ve had a tough season, it can be easy to get knocked out of the game early and not bother to get back up. The Seminoles have to fight through adversity here.

Florida State’s lack of defense means that this number should be pretty manageable for the Irish to reach. Taking a total of over 70 makes a lot of sense with a team that can shoot as well as Notre Dame does.

Florida State came up big with a win in Charlottesville, but looking back, I’m not sure that was all that indicative of the type of team the Seminoles are. I think this is more the team that got blown out in three of its past five games than the one that still showed it can challenge an opponent.
There’s too much here not to make a move on the Irish. Give me Notre Dame. Note: March Madness is upon us! Double your bankroll by taking advantage of a 100% REAL CASH bonus on your first deposit of $100 to $1000 at Betnow Sportsbook! It’s the best bonus running!