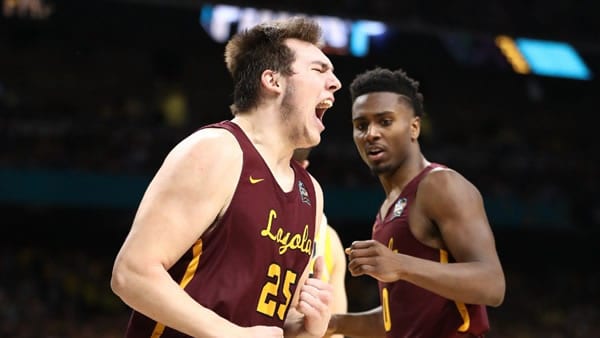 On paper, these teams are Cinderellas. On the court, they’ve been anything but, as both Loyola and Oregon State have outplayed their seed lines and earned a nice payout for gamblers who were brave enough to take them. Before the draw came out, nobody would have thought you were crazy to believe Loyola might be in this game. The Ramblers’ star faded because people expected Illinois to be too much for them, but most people knew that Porter Moser’s team had the talent to get to this round if they ended up with the right draw.

Nobody expected Oregon State to get this far, given that the Beavers hadn’t won a game in the tournament since 1982, but they’ve ridden a pair of almost flawless performances on the perimeter to get by both Tennessee and Oklahoma State and take advantage of their automatic bid. Can the Beavers pull out one more stunner and keep Loyola from making it two Elite Eight trips in four years?

Facing Oregon State’s defense on the perimeter is like trying to fight through quicksand: the harder you fight, the deeper you sink. Oklahoma State became the latest to try to muddle through it and ended up with predictable results — the Cowboys shot 8-for-29 from behind the arc and ended up shooting 27.7 percent for the game.

Oregon State’s defense was so effective against Oklahoma State that not only did the Beavers not need their sudden 3-point shooting prowess, but they scored 80 on the Cowboys without it because Oklahoma State got so frustrated that it sent Oregon State to the line 35 times. The Beavers scored 40 percent of their points from the charity stripe, including 15-of-16 from Ethan Thompson. That’s what really makes Oregon State scary at this point of the season: the Beavers don’t actually have to put up a lot of points to beat you. All Oregon State has to do is play tight defense, and the Beavers will give themselves a chance to win.

More Picks: Get all of our college basketball game previews & picks against the spread

Kofi Cockburn was supposed to be one of the best centers in the nation. Turns out he wasn’t even the best center in his own state, as Cameron Krutwig went head-to-head with the Illinois big man and won the battle, scoring 19 points and grabbing 12 rebounds. But much like Oregon State, Loyola wins with defense, and the Ramblers showed just how strong they can be at that end of the floor in locking down the Illini.

The big thing the Ramblers did to take over the game was get the Illini to shoot themselves in the foot by trying to do too much. Loyola took Ayo Dosunmu out of the game and forced him to try to either beat them with the dribble or let someone else take shots. Both strategies failed, as Dosunmu finished with six turnovers against four field goals and Trent Frazier shot just 1-for-10 from the field. The Ramblers will likely try the same strategy against Thompson and make someone else from Oregon State beat them, and the big worry for the Beavers is this: Loyola beat Illinois without bothering to attack the perimeter. The Ramblers can shoot 3’s and showed it against Georgia Tech, but they’re just as comfortable getting the ball inside and letting Krutwig go to work.

The Beavers can keep Krutwig from attacking the paint. Unlike Tennessee, which ended up playing with no John Fulkerson, Krutwig is healthy and will be on the court. Oregon State really doesn’t have an answer in the interior for Krutwig, which means the Beavers have to find a way to force someone else to beat them. Granted, they didn’t have an answer for Oklahoma State’s interior either, but the Cowboys had Cade Cunningham taking a lot of shots from mid-range. Nobody from Loyola will do that over getting the ball to Krutwig.

Loyola will Cover If:

The Ramblers can keep Thompson under wraps and get him frustrated enough to turn the ball over. Thompson averages close to three turnovers a game, and Loyola really cashed in on Illinois’ frustration as the game got out of hand. Getting extra possessions at a slow pace can make a world of difference.

The defenses are getting too much respect in this game, and the public is only increasing the show of respect they’re giving to both defenses. The total has already dropped a full point, and it’s showing signs of going down even further. Yet the over has cashed in seven of eight for Oregon State, and Loyola has hit in the 70s in four of its past five games. If the Ramblers get there again, Oregon State would only need 56 points to hit the over. This looks like the total is too low, as does Loyola’s first-half team total. The Ramblers have topped 30 in the first half in five straight games, and given that they don’t rely on the 3-pointer, I think they can get there again.

Oregon State has had a nice run, but the Beavers are now up against a team that has been here before and is not going to wilt. Unlike Tennessee, which was missing its big man, and Oklahoma State, which was led by a freshman sharpshooter, Loyola isn’t likely to take the bait when it comes to the arc. I expect Krutwig to have a big game, and if he does, the Ramblers will cover this one. Give me Loyola. Bet your March Madness picks LIVE in-progress at the BEST live wagering platform on the planet —> Bovada Sportsbook! Your credit card WILL work there for deposits and they’ll give you a 50% bonus too!