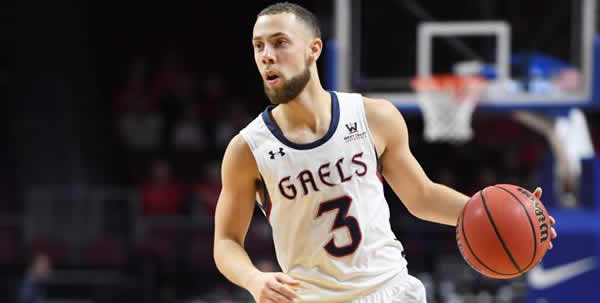 It would have been easy to glance at Saint Mary’s result against Cal Poly and think that everything went according to plan, but the final score didn’t come close to telling the whole story. In truth, the Gaels weren’t playing defense anywhere near the level that coach Randy Bennett wants to see, which led him to pull all five starters in a move designed solely to get their attention.

Given that they outscored the Mustangs by 39 the rest of the way, it seems the Gaels got the message. Unde Bennett, Saint Mary’s has long been a defense-first squad, but the Gaels are at their best when they don’t waste their possessions and make sure that they take care of business at the other end of the floor. This is a squad that started the year by beating Wisconsin at its own game and ended last year by frustrating Gonzaga to claim the automatic bid for the West Coast Conference. Jordan Ford does most of the damage for the Gaels at 19.8 points per game, and Malik Fitts offers solid low-post play that helps the Gaels limit opponents to one shot per trip.

Fresno State appears to be on the right track to becoming a factor in the Mountain West, and with freshman guard Jarred Hyder in the mix, Justin Hutson might have the Bulldogs ready to take the next step and become an NCAA tournament-caliber squad. But for this game, there’s a problem: Hyder’s facing a hip pointer and is unlikely to play. Given that he’s averaged 17 points per game so far, that’s a huge loss that’s going to be very difficult for this squad to overcome. Even without Hyder, Fresno State still has some solid pieces, most notably forward Nate Grimes, who should give Fitts all he wants in the low post. Beyond Hyder, this is a deep team that rotates eight other players into the lineup regularly and rarely gets worn down. But Hyder gives Fresno State another gear, and without him, it’s going to be difficult for the Bulldogs to match up to Saint Mary’s.

Adjustments. Can Fresno State figure out a plan to deal with Jordan Ford and get the offense going if Hyder isn’t able to go, as is likely the case? Hutson has shown himself to be a bright coach who gets the most out of his players so far at Fresno, but this is a tall task this early in the season when even the best coaches are still trying to figure out which parts go where. If he can craft a plan to deal with the absence, Fresno State will have a chance.

The Gaels play with the same fire they showed after the horrible start against Cal Poly. Saint Mary’s is a top 25 squad for a reason when it wants to be, and if the Gaels are ready from the word “go”, they’ll be a difficult team to deal with. That means getting Ford going early and locking down on the defensive side. Taking care of the paint and dealing with Grimes’ ability on the boards would be a significant step in the right direction as well.

Fresno State will Cover if:

The Bulldogs can use Grimes to keep possessions going. One of the secrets to defensive efficiency is that it falls apart if you can attack the glass and extend your trips down the floor. With Grimes and Orlando Robinson working down low, the Bulldogs have the pieces they need to outfight Saint Mary’s for second and third chances at the bucket. If Fresno State can win the battle on the boards and keep the ball on the offensive end, I like their chances.

These early-season games are often tough to figure out because coaches are still trying to figure out which pieces go where and make sure that they can get the most out of their teams. Even a veteran squad like Saint Mary’s isn’t immune, as the Cal Poly win showed. But the Gaels seem to have things back on track after their less-than-stellar start, and they play a slow, efficient brand of basketball that’s proven to be a nightmare for other programs to deal with.

Fresno State also plays a slower-paced style, but there’s a problem with the Bulldogs: offensive efficiency. While the Gaels rank in the top 20 in the nation in terms of efficiency, the Bulldogs barely crack the top 150. That’s not a good combination when facing a squad like Saint Mary’s in any situation, but it’s especially true when you’ve given up the home-court advantage to instead play on the Kings’ home court. The Save Mart Center in Fresno isn’t known as an intimidating place to play, but it’d be a tougher challenge for the Gaels than having a neutral atmosphere in Sacramento.

I like Fresno State to do some things once it gets Hyder back healthy, but for this one, give me Saint Mary’s to keep responding to Bennett’s challenge.