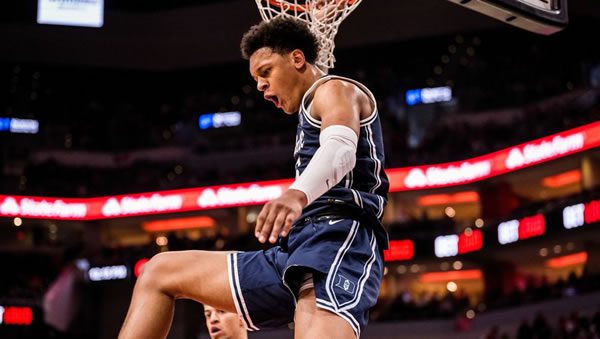 Jim Boeheim has famously never had a losing season in more than four decades at Syracuse, but to keep that streak alive, he’s got to find a way to get the Orange past Duke, the leader in the ACC.

Unfortunately for the Orange, it’s not anywhere near that simple. Not only does Syracuse have to win the game against Duke, but it has to do so without leading scorer Buddy Boeheim on the floor, as the guard reacted to something on the court and tossed an elbow, earning a one-game suspension from the ACC for his actions.

Should Syracuse keep the season going with an upset victory, they would get Boeheim back for the rest of the tournament. But considering that the Orange have spent much of the years as Cole Swider and the two Boeheims on the court, there’s little reason to think that they can score enough to keep up with Duke, and that’s before you throw in that Duke is likely to be in a foul mood after the way the Blue Devils’ regular season came to a close. Duke’s been waiting to return to the court ever since that loss to the Tar Heels, and Syracuse is likely to simply be the team that’s in the Blue Devils’ way as Duke rounds back into form.

The first two meetings with Duke didn’t go anywhere close to the way the Orange would have hoped, as Syracuse either couldn’t slow down the Blue Devil big men or couldn’t hit the shots needed to keep up on offense. The reality is that this Syracuse team simply doesn’t have the skills needed to play its famed zone defense as well as it usually does, perhaps the biggest reason why the Orange have been so mediocre this season.

The one saving grace that Syracuse offers is that the Orange have traditionally been a big-time team in March, and Syracuse has a history of taking a lost season and pulling together for a couple big wins in either the conference tournament or NCAA tournament. But those were talented but flawed teams that pulled that off, and those teams weren’t trying to play without their biggest star. And not only is Buddy Boeheim Syracuse’s biggest star, but he’s one of the only shooters the Orange have available.

The biggest concern for Duke and Mike Krzyzewski is avoiding overconfidence after two routs of Syracuse in the regular season and the Orange now missing their best player. Syracuse normally tries to take away the interior with its zone defense, but in the last meeting, Mark Williams and Paolo Banchero did whatever they wanted and the Blue Devils scored 97 points.

Duke does have a tendency to allow some lesser teams to hang around longer than they should, but that shouldn’t happen this time. When a team has hung around with Duke too long, it’s because the Blue Devils were coming off a string of success and got a bit careless in the wake of that sustained success. This team is coming off a home loss to North Carolina. Krzyzewski should have his team’s attention here.

Syracuse will Cover If: The Orange can find a third scorer to replace Boeheim. It’s almost impossible to change up who you are at this stage of the season, but with Boeheim suspended, the points have to come from somewhere if the Orange intend to even be close to competitive in this game.

Duke will Cover If: The Blue Devils can put the game away in the first 10 minutes. Duke is likely to hit the gas from the first whistle, reasoning that Syracuse isn’t coming back if it falls into a deep hole early. It’s a common tactic, one that Krzyzewski knows quite well.

Duke did whatever it wanted last time, and that was a situation where the Orange really needed a win and found themselves completely helpless to stop the big men. When a defense is designed to take away what Dule did so well and that happens, I think the team total over 82.5 for Duke makes a world of sense.

Duke’s languid tendences do worry me to an extent, but the Blue Devils are by far the better team and should be able to handle Syracuse without Boeheim on the floor. Syracuse’s run should end here; give me Duke. Question: Did you know that you could be betting for cheaper? Almost all sportsbooks charge the bettor -110 odds on sides and totals. Did you know that you could be laying only -105 at BetanySports? It doesn’t sound like much, but if you take a couple minutes to pencil out how much you’d have saved over the past year the numbers are astronomical! Be smart! Make the switch to reduced juice betting today! You’ll be SO glad you did! (Note: You must choose reduced juice over instead of the signup bonus when you sign up there). Click here to start saving big bucks TODAY!