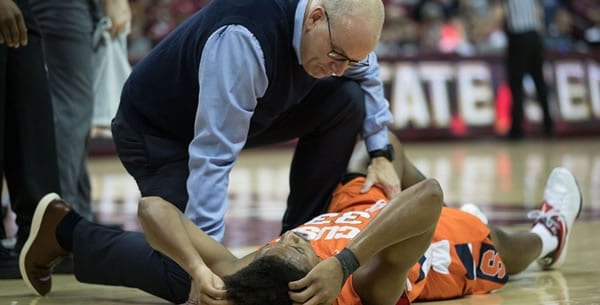 Close contests are the name of the game for Syracuse, which has seen its past eight matches all decided by nine points or less. Throw out a nine-pointer at Duke, and the Orange’s previous four games were decided by a combined 11 points, showing that Syracuse likes to keep it close, for better or worse. The Orange’s affinity for close games has put it in the mix for a top-four seed in the ACC tournament, but Syracuse is going to have to get a win here and make a deep run to have any real chance at making it to the NCAAs. The rest of the Syracuse schedule is against teams who aren’t likely to be around by the ACC semifinals, which means that they won’t move the needle much in the eyes of the selection committee. 18-15 might be good enough to qualify for the NCAAs out of the ACC in most seasons, but this is not one of those seasons. The Orange have to get a win over Louisville here and beat one of Duke, Florida State, or Louisville in the ACC tournament to even think about qualifying without winning the conference.

The good news for Syracuse is also the bad news for Syracuse: there is no such thing as a consistent scorer on this squad. Four different Orange players repeatedly lead the team in scoring, and all four have taken turns leading the scoring in the past four Syracuse games. That means that Louisville will have to be prepared to deal with all of Elijah Hughes, Buddy Boeheim, Joseph Girard, and Marek Dolezaj, but it could also mean a slow start for the Orange as they try to determine who has the hot hand in this game.

Something is seriously wrong with Louisville right now. The Cardinals are not playing the way they were last month. Coach Chris Mack gave his team a collective punch in the face by benching Jordan Nwora, but that didn’t prove effective, as Nwora has now shot 2-for-11 in losses to Georgia Tech and Clemson and scored just seven points while turning it over eight times. However, the Yum Center could prove to be the salve that Louisville needs to resurrect its play, as the Cardinals are 14-1 at home with the lone loss coming to Florida State.

The big thing that has to change is that the Cardinals have to shoot it better. Louisville shot under 35 percent in each of its past two games, leading to a pair of predictable defeats. It could just be that Georgia Tech is a bad matchup for Louisville, as the Cardinals also struggled to score against the Yellow Jackets in Louisville, scoring only 68 in that game. But the Cardinals had no problems with Clemson at home and scored 80 in that contest, kicking off a five-game stretch where Louisville hit 77 or higher in each game. In other words, this team’s future is as clear as mud right now. The only certain thing is that Louisville has to hit some shots if it’s going to get anything accomplished.

3-point shooting. Louisville has to start hitting threes because the way that you beat a 2-3 zone is to attack it from the outside. Syracuse doesn’t have a great defense by any stretch of the imagination this year, so there is little reason to doubt Louisville has the potential to pick it apart if it can hit shots. In fact, this could be a very welcome break for the Cardinals, as Clemson and Georgia Tech both have top 30 defenses and have frustrated good offenses in the past, such as Duke. Not so for Syracuse, which has allowed five of its past seven opponents to top 75 points. That’s unfortunate for the Orange because despite their scoring prowess, it virtually all comes inside. Syracuse shoots just 26 percent from the arc, a tough way to win in 2020.

Syracuse will Cover if:

Hughes or Boeheim can find their touch. Boeheim was 2-for-13 in the Orange’s past two games, and Syracuse badly needs him to start hitting the net if it’s going to get a win here. The Orange don’t have the kind of defense that can slow teams down; they have to outscore them in order to win, and there’s little to suggest that they can do that. In order to outscore Louisville, they either have to count on the Cardinals to keep missing or hit a few of their own. The latter is a much more likely possibility.

The Cardinals can get the job done on the glass. In addition to Syracuse’s 3-point struggles, the Orange also don’t rebound the ball particularly well. That’s a real problem in this situation because Louisville knows how to grab rebounds well. The Cardinals have to make sure to punish Syracuse on the glass and make sure that missed 3-pointers don’t hurt them.

This game is calling for the over to be bet. Syracuse has gone over the total in six of its past eight games, pushed in a seventh and missed the number by only half a point against Pittsburgh. Given the Cardinals’ offensive struggles, this number is likely set too low and should be well within reach if Louisville takes advantage of the Orange’s soft defense.

To me, that’s a good combination to trust. Take the Orange to cover and pair it with the over if you can. Where do you bet your basketball picks? Does your bookie give you discounted odds? No he doesn’t! You would be saving SO MUCH money wagering on games at -105 instead of -110! Why not make the switch today? You’ll be so happy you did! —> Click here to start saving BIG money today!