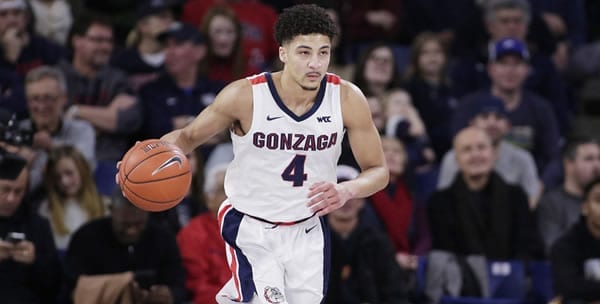 The way Saint Mary’s won against BYU was kind of reminiscent of the way that it won against Gonzaga last season. The Gaels took the air out of the ball in that game and did just enough to keep their noses in front of the Bulldogs to score the upset that landed them in the NCAA tournament. This year, they don’t have to worry about that, because they know they’re in for a fact. So the Gaels are literally playing with nothing to lose, as the only thing they can do is help their seed.

If the Gaels are going to take down the Bulldogs, they’ll need a top performance out of Jordan Ford. Ford was the hero late Monday night when he hit the game-winning jumper with one second to go on a play where even his teammates didn’t expect him to shoot a jumper. Ford already has 60 points in the WCC tournament, and Gonzaga knows full well just how dangerous he is, as he dropped 28 on the Bulldogs in Spokane. However, Saint Mary’s has other options beyond Ford, notably Malik Fitts, who scored 15 points in Spokane and has to be a solid No. 2 option for Ford to keep pace with Gonzaga.

Gonzaga had to work its tail off to survive San Francisco, but the Bulldogs are finally past the Dons and move on to the opponent that is both most like them and least like them. Saint Mary’s prefers to plod along at a slow pace, while Gonzaga goes for quick openings and takes them whenever they arise, looking to score 90 on you if it can. Filip Petrusev and Killian Tillie both looked like themselves in the win over the Dons, and if both are playing their best basketball right now, Gonzaga is a potential national champion.

Where the Bulldogs excelled was in getting Jimbo Lull in foul trouble and leaving the San Francisco post exposed for their big men to attack. That’s the way that Gonzaga plays best, and the Bulldogs will need to keep pounding away at Saint Mary’s in order to get a similar result. The Gaels don’t have as much bulk as the Dons did, so Gonzaga has a real opportunity to take over the game inside if it keeps going to its bigs.

Rest. Usually, in the conference tournament, one team will be able to have a slightly easier time in the previous round and gains a significant edge when the teams meet each other in the next game. That’s not the case this time around, as Gonzaga and Saint Mary’s both had to pull the game out of the fire late to keep their tournament hopes alive.

So the question here is which team is rested enough to plow through this final game before Selection Sunday? Both played late, so that’s not going to be much of a factor, and both are talented, well-coached squads who will not self-destruct. This is going to come down to the final 10 minutes and who has the legs to push through at the end.

The Gaels are able to slow the game down to their pace and frustrate Gonzaga. Saint Mary’s cannot play at the breakneck pace that Gonzaga loves, because that’s not who the Gaels are and it will never be who they are. What they need to do is take Gonzaga out of its game the way they did last season, which requires long possessions that gradually take the air out of the ball. The Gaels have the best pure scorer on the floor in Ford and know how to handle this game, so it’s there for them if they can execute.

The Bulldogs can sprint their way to an early lead. Saint Mary’s is not the kind of team that’s built to come back from an early deficit, and especially not against the likes of Gonzaga, which knows its strengths and weaknesses better than anybody in the country. The Bulldogs have to put some separation between themselves and the Gaels to prevent this from becoming a tight game.

Gonzaga has the motivation this year, but Saint Mary’s is a better team than it was a year ago and doesn’t have to worry about losing. The Gaels can take a loss by as many points as Gonzaga is willing to dish out and not hurt their seed, so they can play with nothing to lose and take a few chances.

The Gaels have played their tails off as of late. This is a bad matchup for them, though. They have no bigs and are going to get dominated in the paint. Go look at the last five matchups in this series, and you’ll see that the Zags have dominated (and would have covered tonight’s point spread in four of those games. Throw in that St. Mary’s had double OT vs. Pepperdine and then a huge emotional win against BYU last night, and you’ve got a perfect recipe for another double-digit loss. Lay the points with the Bulldogs, and I’ll see you at the window! Stop betting games at -110 odds! You’re overpaying! Reward yourself TODAY by laying only -105 at the web’s best betting site: 5Dimes!