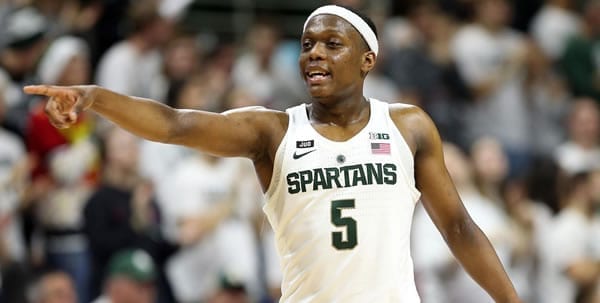 After a 5-5 start that included a loss to Rutgers, Wisconsin appeared dead in the water and on its way to an NIT berth, if that. But the Badgers have recovered nicely, winning six of their past seven games and taking its only loss by a single point at home against Illinois. Included in that have been three wins over ranked teams, including two road wins over Ohio State and Penn State.

Now, can the Badgers’ balanced scoring take down another ranked opponent? A lot of that depends on if Wisconsin can defend the 3-point arc. In the one setback, Illinois won because it shot over 40 percent from the perimeter, which proved too much for the Badgers to overcome. Wisconsin’s game is based on two things: denying opponents good looks and taking care of the basketball. The Badgers did very well at the second, as they have turned it over fewer than ten times in each of their past three games, but Illinois found the key to the Wisconsin defense and hit its shots. Wisconsin hasn’t seen an offense quite as talented as the Spartans’ unit, and they’ve got to do a better job defending than they did against the Illini.

That was about as ugly as a game gets for Michigan State, as the Spartans looked like they’d never played the game on their visit to West Lafayette. Michigan State fell apart because the Spartans couldn’t stop turning the ball over against Purdue, and when the Boilermakers hit their shots, the game got completely out of hand. The Spartans looked wholly overwhelmed by Purdue’s slow tempo and nasty defense, and that’s a significant worry given that Wisconsin plays a similar style.

There’s also the fact that Kyle Ahrens is now injured, lost to an Achilles injury. That’s only going to put more pressure on Cassius Winston and Xavier Tillman, who did not handle that pressure well at Purdue. Against the Boilers, they shot 8-for-23 and finished with 18 points combined, nowhere close to enough to beat a good team.

History. Wisconsin comes into this game riding a seven-game losing streak to Michigan State, including three straight at the Breslin Center. None of those games have been within 10 points. Which begs the question as to whether there’s a mental block for the Badgers in East Lansing. However, my guess is that Wisconsin’s struggles have more to do with what type of team the Badgers have brought to Michigan State. The Badgers missed the NCAA tournament for the first time in 19 years in 2018, and they were a No. 7 seed in 2017, the last two times they’ve visited East Lansing. This Wisconsin team looks like it’s a better squad than those were and has the ability to frustrate the Spartans.

The Spartans can rebound the ball and take care of the basketball. Michigan State is at its best when it’s doing work on the glass and not beating itself, which it didn’t do at Purdue. The Spartans just missed their season-low for rebounds against the Boilermakers, and 18 turnovers is a great way to lose a basketball game against any opponent at any level. The Spartans have to avoid collapsing under pressure.

Honestly, I think Wisconsin might prefer to play on the road at this point. The Badgers’ past two games in the Kohl Center have come down to the wire, while they’ve pulled off a pair of comfortable wins against Ohio State and Penn State on the road. Meanwhile, Michigan State just suffered its worst loss as a top 10 team, and the Spartans now face a hot team that plays a similar style to the kind of opponent that just ran them out of the gym.

I don’t really love Michigan State bouncing back here with how well Wisconsin is playing. I also think there’s a good chance that this is another low-scoring affair given that Wisconsin has been able to hold four of its past five opponents under 60 points. Give me the Badgers. This would be a GREAT game to tease! Did you know that you can bet teasers up to 20 points at Sportbet? Click here to check them out today!