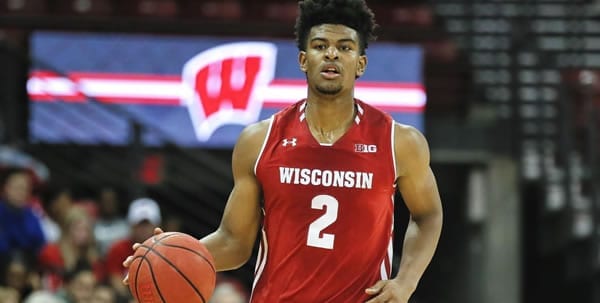 Here’s the ultimate example of statistical socialism, as Wisconsin features an attack that doesn’t really seem to do much individually yet still proves to be a fairly effective and efficient offense as a whole, in large part because the Badgers focus mainly on squeezing the life out of the shot clock and bleeding out each possession. Wisconsin was really the first team that ever did this when Bo Ryan was the man in charge, and the Badgers have kept to that even after his retirement.

The one player who stands out from the pack at all is Nate Reuvers, who averages 14.7 points a game, but beyond him, Wisconsin features five players who all average between eight and 10 points and four and five rebounds per game. The contributions really can come from anywhere in this offense.

Something isn’t right with Ohio State at the moment. The Buckeyes seemed to be in control after a half in Cleveland against West Virginia, but Ohio State then fell victim to the Mountaineers’ new style of pressuring when the time is right and slowing the game down at other times. Despite a friendly crowd, Ohio State turned the ball over 22 times and shot horribly against the West Virginia defense, turning a comfortable first-half lead into a surprising loss.

Ohio State has picked up a few impressive-looking victories against Villanova, North Carolina, and Kentucky so far, but it remains to be seen whether or not any of those teams are actually any good. North Carolina, in particular, has been shown to possibly be Roy Williams’ weakest team in years, suggesting that the Buckeyes’ success might be a mirage.

Turnovers. With two defense-first teams like this, every possession is simply critical. Wasted possessions cannot happen if a team is going to find its footing in this type of game, and that means Ohio State’s recent turnover struggles are under the microscope here. The Buckeyes cannot continue to turn the ball over more than 15 times a game the way they have for the past four contests and expect to win a game against a squad as disciplined as Wisconsin is. The Badgers might be struggling to get results, but one thing they know how to do is take care of the ball. The team that turns it over less is likely to come out on top.

The Badgers can shoot the way they did at Tennessee. Wisconsin easily flattened the Volunteers in Knoxville by forcing turnovers and shooting a solid percentage of 43.9 against a squad that usually plays tough defense. There isn’t much to suggest that shots will be easy to come by against Ohio State, so a percentage of around the same number will likely be enough to keep pace with the Buckeyes. Wisconsin simply has to produce the way they did when it mattered against a solid opponent.

The Buckeyes can take care of the basketball better. Ohio State has the most talent and the best player on the floor in Kaleb Wesson, but the Buckeyes haven’t been playing like a talented squad as of late. They’ve been struggling to keep themselves organized and on the same page, and that’s a significant concern for them as they get into the meat of Big Ten play. This team has the potential for big things, but it’s not playing like a squad that can reach those expectations.

Ohio State isn’t what it was in the first month of the season. I’m not sure if something happened to the Buckeyes in Minneapolis when they got beat by Minnesota or if there was always something waiting to be exposed with this team, but the Buckeyes are on a downward trend and showing no signs of picking things up and getting back on track. In contrast, Wisconsin has stepped up its play in the past three games and seems to be rounding into form nicely.

A couple of weeks ago, the idea of Ohio State covering 9.5 against Wisconsin at home would have been a no-brainer. Now, it seems like way too many points in a game that the Badgers might even steal straight up. Give me Wisconsin.