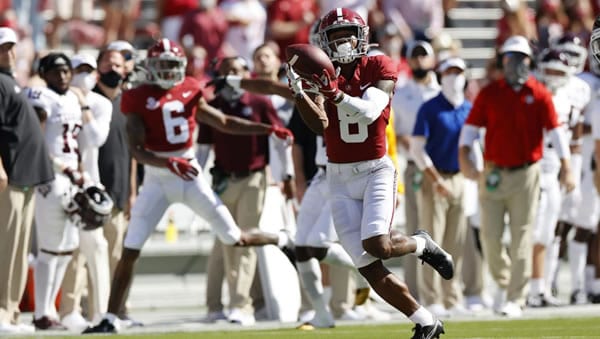 The Ole Miss Rebels captured their first victory in the Lane Kiffin era last Saturday by holding off Kentucky in a wild 42-41 shootout. It was the 2nd straight week the Rebels defense allowed opponents to score more than 40 points stemming from the 51-35 loss to Florida in the season opener. This week the struggling Rebels defense gets one of their biggest challenges of the season when they square off with the 2nd ranked Alabama Crimson Tide at Vaught-Hemingway Stadium. On the heels of a 52-24 blowout victory against Texas A&M, this should be another prime opportunity for the Alabama offense to flex their muscles and put the total (74) in serious jeopardy!

Last week, Alabama quarterback Mac Jones had the best performance of his career by completing 20 of 27 passing for 435 yards with four touchdowns and just one pick. Jones’ performance follows a strong 18 of 24 passing for 249 yards with two touchdowns in the opener against Missouri. Through 2 games, the junior quarterback has been everything that Alabama hoped for and more. Before the year began, I thought Jones’ role would be suited towards a game manager as Alabama focused the strength of their offense towards the running game. However, Jones has proven to be much more than what many expected and just posted his best performance of his career against a quality Aggies defense.

Despite Jones’ success, Alabama is still a run-heavy offense backed by enormous size along the offensive line. The Crimson Tide have excellent tailbacks in Najee Harris and Brian Robinson. Both are in-line for a prime match-up opportunity against this Rebels defense. For those who are unaware, most of Ole Miss’s struggles are in their inability to stop the run. Of the 74 teams competing this season, the Rebels rank 73rd, allowing over 300 yards per game on the ground. Only the Navy has been worse this season against the run, and this week’s match-up will be the toughest to date. Expect Alabama to have no trouble running the football and expect Jones to strike over the top when given the opportunity!

I initially thought the 24 points that the Rebels are getting were very generous. Despite the defensive concerns, the Rebels have a potent offense that can find the end zone. QB Matt Corral is a high percentage passer, and WR Elijah Moore is the reliant go to threat in critical situations. I don’t expect Ole Miss to have a ton of success on the ground this week, but their offense still does a good job of taking what the defense allows. Corral is the type of passer that can hit the high percentage throws underneath the coverage to keep the chains moving and give the Rebels chances to score. However, the downside to backing the Rebels and the 24 points is that you truly cannot rely on the Ole Miss defense in their worst match-up of the season. Therefore, I think the best play in this game is the “over,” which has hit in 4 of the last five matches involving the Crimson Tide.

Jay’s Pick to Cover the Point Spread: I really like the over in this spot. Alabama has the potential to post another huge number, and if we can just get a little help from the Rebels offense, this should be a highly probable play. Take the over 74. Note: Many are bummed out over 5Dimes leaving the offshore market. This left most with no place to bet games at reduced odds. Did you know that you can still bet on games at -105 odds? Yes! Find the same great odds and betting platform at BetAnySports!