Home » cfb » Are Online Sportsbooks Giving Clemson Too Much Respect?

Are Online Sportsbooks Giving Clemson Too Much Respect? 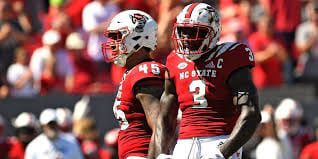 A pair of unbeaten teams will collide this Saturday when the no. 16 North Carolina State Wolfpack meet the no. 3 Clemson Tigers in Death Valley. Both the Tigers and Wolfpack had a bye last week as they prepare for this gigantic match-up that will determine control of the ACC Atlantic Division. The Clemson Tigers are currently listed as 17 point favorites over NC State following an absolute massacre over Wake Forest 63-3 two weeks ago in Winston-Salem. In that game, Clemson’s offense finally put together a solid all-around performance for the first time this year as the Tigers posted nearly 700 yards of total offense. The demolition of Wake Forest definitely had an effect on this week’s betting line which has given some considerate value in taking the points with the Wolfpack!

The public perception, which is driving the line at the sportsbooks, is that Clemson’s offense is still this fast paced electrifying passing threat that hits big plays down the field. No doubt Clemson has some enormous talent in the passing game. Quarterback Trevor Lawrence has looked really good since taking over the starting job from former starter Kelly Bryant. Lawrence has tossed 11 touchdowns with just 2 picks and has a host of talented receivers including veteran Hunter Renfrow. However, this offense is not nearly as prolific in their passing attack as perceived. In fact, the bulk of the success on offense has been a result of the running game and the explosive threat of running back Travis Etienne. Etienne has emerged as one of the best offensive players in the ACC with 761 yards with 11 touchdowns through the first half of the season. He is one of those game changes that can turn out the lights with a single touch and Clemson is starting to rely heavier on the ground attack to move the football.

The good news for Clemson fans is that they have a great amount of balance and weapons for that matter. Still, their 63 point/698 yard output against Wake Forest was the only truly impressive performance from the offense this year. We are talking about a team that went down to the wire with the likes of Texas A&M and Syracuse who are far from elite teams. I am not saying that NC State is an elite team but I do believe they have enough size to stand strong defensively. From a pure match-up standpoint, the Wolfpack actually hold some upside. The pass rush is very solid and they stand well against the run. As long as they can prevent the big plays and not allow Lawrence a long time to throw the football, I don’t think this is a game where Clemson will hang a big number.

The Wolfpack offense will score points

I mentioned that I believe North Carolina State’s defense has some potential upside in the matchup where I don’t think they will be blown away. On the other side of the match-up, I also like the Wolfpack offense. Clemson’s defense is very good and there is absolutely no denying that fact. The defensive line is the best in the ACC and among the best in the country. With those things in mind, NC State does have a veteran quarterback in Ryan Finley who is a very solid passer and has the experience to deal with the pass rush. Finley has tossed 10 touchdowns with 3 picks this year while completing 70% of his passes. Sure, it is not going to be an easy task against this Clemson defense this week but NC State has some serious size in their receiving corps that can compete if they can overcome the defensive line. Both Jakobi Meyers and Kelvin Harmon are big targets in the passing game and will positive matchups against this Clemson defense. If the offense simply executes and avoids turnovers, they should be able to score points which makes the 17 they are already getting more valuable.