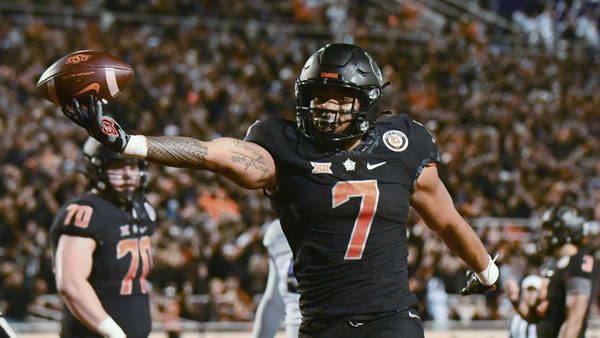 So it is possible to have a Big 12 championship game without Oklahoma, as the Sooners will not be part of the conference title game for the first time since the 10-team era began. Instead, it’s Baylor trying to turn the tables on Oklahoma State and deny the Cowboys their first trip to the College Football Playoff, after falling short in Stillwater when the teams met in early October. In that game, the Bears’ defense actually had a great day, intercepting Spencer Sanders on three occasions and holding the Cowboys to just 24 points.

The problem was that Baylor never figured out how to crack the Cowboys’ defense outside of one big play from Abram Smith for their first touchdown. The Bears have won six of their past seven games since that loss, but the offense still hasn’t changed all that much from the team that couldn’t move the ball in Stillwater. Unless Baylor has better luck with the Oklahoma State defense in Arlington, it’s hard to see the Bears reversing the result of the first game.

How the Public is Betting the Baylor/Oklahoma State Game

The sharps might have gotten spooked by the second half of the Bedlam Game because they’re backing Baylor to the point that the spread has ticked down a point from -6.5 to -5.5, despite 58% of tickets coming in on the Cowboys. The total has fallen three points already, dropping from 49.5 to 46.5.

The Bears decided pretty quickly that they couldn’t run on Oklahoma State, which meant that Abram Smith got just ten carries in the first meeting. Outside of one breakaway, Smith was held to 42 yards on the other nine carries, a decent average but not nearly good enough to sustain the Bears’ weak passing attack. Baylor gains more yards on the ground than it does through the air, so if the Bears give up on the run, they don’t really have a lot left.

When the Bears do throw, Tyquan Thornton had proven a solid option, but Gerry Bohanon — if he plays — isn’t exactly willing to take many shots deep against the defenses of the Big 12. In his most recent game, he only threw 14 passes for 76 yards against Kansas State before exiting with a hamstring injury, the third time in four games that he hasn’t topped 200 yards through the air. Blake Shapen has been more aggressive, but he’s still a true freshman, and throwing him against Oklahoma State’s excellent defense is not really what the Bears would like to do here.

Spencer Sanders has to be better than he was the first time he faced Baylor because Oklahoma State cannot go minus-3 in turnovers and expect to have success again. The Cowboys were able to win anyway, partly because of their dominant defense and partly because they didn’t stop feeding Jaylen Warren. Warren only managed 3.6 yards per carry, but the Cowboys kept pounding away and eventually wore the Bears down enough to win the game late.

That’s Oklahoma State’s MO: the Cowboys are going to have the offense do just enough to get the job done while counting on the defense to win the game. Sanders is at his best when he just takes off and goes, as his decision-making in throwing the ball is sometimes a little suspect. If he’s making good decisions, Tay Martin could have a big game against the Baylor secondary, as he went for 110 yards in the first meeting. But above all, Sanders has to not hand the game to Baylor. The Cowboys got lucky once; they need to go win the game this time.

This hasn’t been a great matchup for Baylor. In the teams’ past 16 meetings, the Bears are just 5-11 ATS against the Cowboys, and the favorite has covered in 16 of the last 22 matchups. That said, the Bears are excellent in December, covering in 12 of their past 14 games played in the year’s final month.

But the Cowboys are a team that plays up to expectations, covering in 20 of their past 27 against a team above .500. More than that, they’ve covered in six of seven with one push as a favorite, and they’re 9-1-1 ATS in their past 11 league games. The over has hit in seven of the last ten meetings, but that seems less than likely this time around.

Temperatures will sit at 75 degrees at kickoff, so the roof to AT&T Stadium might be open for this game. If the roof is open, the wind will blow at seven miles per hour to the northeast.

I can’t see Baylor turning this thing around. The Bears gave up on the run too soon against Oklahoma State, and the passing attack isn’t really strong enough to attack the Cowboys’ secondary the way that Oklahoma did. The Cowboys should have the advantage on defense, and Sanders shouldn’t throw three interceptions this time around.

As long as the Cowboys don’t shoot themselves in the foot, they should be the better team. Even if they do, they already did it once and got away with it for the cover. That tells me that it’s likely to happen again, and I’m taking Oklahoma State. Bet your Week 14 college picks for FREE by taking advantage of a 100% REAL CASH bonus on you first deposit of $100 to $300 at MyBookie Sportsbook! (Must use bonus code PREDICT100).