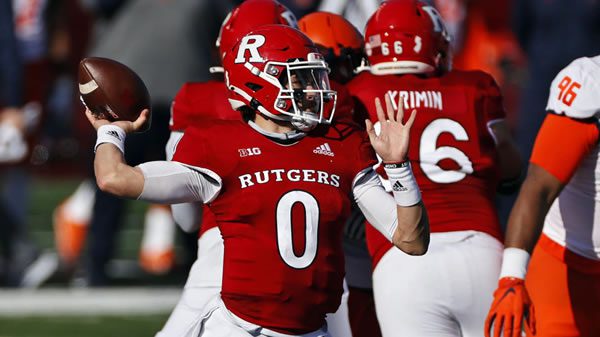 Rutgers gets a chance to show it’s a program on the improve when it hosts the big bad Buckeyes of Ohio State for a Big Ten East bout Saturday afternoon in New Jersey. The Scarlet Knights, in their second run under Coach Schiano, are 3-1 on the season and just gave Michigan a good game. The Buckeyes, meanwhile, are also 3-1 but haven’t quite looked like the beasts they’re supposed to be.

Ohio State is favored by two touchdowns-plus for this game, which is actually the lowest the team has been favored against Rutgers since these teams became conference rivals. How are we playing this game with our free college football betting pick?

Week 5’s college football betting lines opened Ohio State at -15.5 over Rutgers, with an over/under of around 56.5. Both those numbers have moved with the spread now -15 at most betting sites and the total is up to 58 after the early betting action.Any bettors out there thinking Rutgers might pull the outright upset here could get +475 at Bovada on the money line.

The Buckeyes are 3-1 on the season after crushing Akron last week 59-7. Ohio State spotted the Zips the first seven points of the game, then scored the last 59. Also, much to the delight of their financial backers, the Buckeyes tacked on one last touchdown with just under three minutes to go to cover the spread as 48-point favorites.

Ohio State out-gained Akron 622-229, out-rushed the Zips 237-76, and scored on a pick-6. Which is about what we’d expect the Buckeyes to do against an opponent like that.

OSU freshman quarterback Kyle McCord, making his first collegiate start in place of the injured CJ Stroud last week, hit on 13/18 passes for 319 yards and two touchdowns, with one pick, before leaving the game in the third quarter.

As of this writing Stroud, who started OSU’s first three games this season, was listed as probable for Saturday afternoon.

Ohio State opened this season with a 45-31 win at Minnesota, but it actually trailed that game in the third quarter. The Buckeyes then lost at home to Oregon, then beat Tulsa 41-20, although that game was closer than that final score would indicate. And the game against Akron basically amounts to a scrimmage. So Ohio State hasn’t really broken loose yet this season.

Meanwhile, the Scarlet Knights are also 3-1 on the season after falling gamely at Michigan last week 20-13. Rutgers allowed the Wolverines to drive their first two possessions of the game 74 and 72 yards to touchdowns and trailed 20-3 at the half. The Knights then pulled to within 20-10 midway through the third quarter and to within one score early in the fourth but could get no closer from there. However, Rutgers hung on for the cover as a 20-point underdog.

The Knights actually out-gained Michigan 352-275, out-rushed the Wolverines 196-112, and won time of possession by a 33:27 split. But Rutgers also missed a chip-shot field goal and converted just 1/4 on fourth downs, all three failures coming in Wolverines’ territory.

The Scarlet Knights opened their season with a 61-14 victory over Temple, covering as 14-point favorites. Rutgers then won at Syracuse 17-7, covering at -2.5, then beat FCS Delaware 45-13, covering at -20. So the Knights are perfect on the season against the spread.

Rutgers returned 20 starters for this its second season under Coach Schiano and appears well on its way toward its first bowl bid since 2014.

Ohio State led that game 35-3 at the half and 42-9 through three quarters before taking its foot off the gas and letting Rutgers make the final score a bit more respectable.Also, that game played over a total of 62.5.

Totals are split 2-2 in Buckeyes games this season, which are averaging 67 total points.

Totals are split 2-2 in Knights games this season, which are averaging 48 points.

Overs are 3-1 over the last four meetings between these two teams.

This game should be a lot closer than previous Ohio State victories over Rutgers, but the Buckeyes are still the better, much more talented team playing on the road, where the spreads are friendlier. We’re betting Ohio State here, minus the points. Bet your Week 5 college football picks for FREE by taking advantage of a 100% REAL CASH bonus on your first deposit of $100 to $1000 at Betnow!