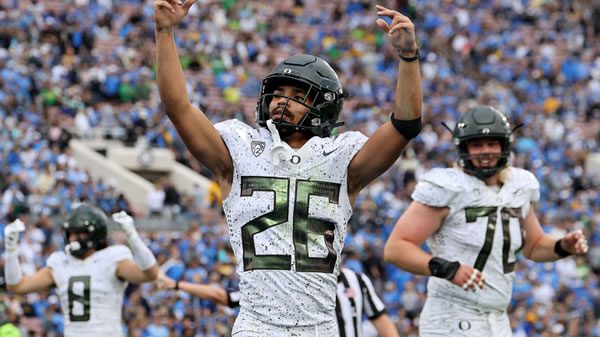 The Pac-12’s last, best hope at the playoffs faces off against a team who has looked disastrous ever since its last stand back in Week 2 against Texas A&M. In hindsight, that was much more of a knock against the Aggies than it was anything that the Buffaloes did well, as Texas A&M couldn’t get out of its own way against Colorado and allowed a mediocre team think it had a chance to stay in the game.

Oregon’s been doing that against Pac-12 foes, but that shouldn’t happen in this game, as the Ducks have mostly owned the Buffaloes ever since Colorado joined the Pac-12. But it’s impossible to deny that Oregon has not looked right ever since the game at Ohio State, as the Ducks have slogged through to get a result without ever looking like a championship team again. Oregon’s win over UCLA was its first cover since the trip to Columbus, and the Ducks are 0-4 ATS at Autzen Stadium this season. But Colorado has looked horrific ever since the A&M game, and the Buffaloes barely competed against California in their most recent game. Which team wants this one more?

How the Public is Betting the Colorado/Oregon Game

The sharps have been burned one time too many from trusting Oregon, as they have brought the line down from -26.5 to -24, despite 65 percent of tickets coming in on the Ducks. The total is unchanged at 49.

When Colorado Has the Ball

Statistically speaking, the Buffaloes don’t do anything well. Colorado ranks dead last in total offense, in large part because of a passing offense that barely breaks 100 yards per game. Brendon Lewis doesn’t make many bad decisions with the football, but he doesn’t make good decisions with it either, as three of his past five games have seen him throw for 70 yards or less.
Those are Air Force-type numbers, and they wouldn’t be an issue if the Buffaloes had a great run game, but Colorado doesn’t have that either. At four yards per carry, Jarek Broussard is the best Colorado has, which is a big reason why the Buffaloes’ offense has just 11 touchdowns in seven games. Seven came against FCS Northern Colorado and winless Arizona. If the Buffaloes’ defense or special teams doesn’t create something, it’s hard to see Colorado moving the ball.

Oregon’s passing attack isn’t a heck of a lot better than Colorado’s, but the Ducks do have a solid ground attack led by Travis Dye. Oregon averages nearly 200 yards a game on the ground thanks to Dye averaging close to 100 yards per game himself, and that’s what turns the Ducks’ offense from anemic into serviceable.

Stop the Oregon ground game, and you can easily beat the Ducks, as they don’t trust Anthony Brown enough to open up the offense and try to beat teams through the air unless they don’t have a choice. The win over UCLA offered some justification for that, as Brown tossed two interceptions and zero touchdowns against the Bruins and was only bailed out by Dye taking over the game with four rushing scores and his own legs scoring what proved the winning touchdown. This is not an offense that will impress anyone, but the Ducks will do just enough to get the job done on most occasions.

This has tended to be one-way traffic in this series, as Colorado’s only win over Oregon since joining the Pac-12 came as part of the disastrous 2016 Oregon campaign that cost Mark Helfrich his job. The teams have only met once since then, and Oregon quickly restored order under Mario Cristobal by pasting Colorado 45-3 in 2019. The Ducks are 6-1 ATS in this series, and they’ve never had a problem scoring points on Colorado. In the past eight meetings in this series, Oregon has averaged 47.25 points, while Colorado has topped 20 points on just two occasions.
Neither team has proven trustworthy in this campaign unless you count Colorado playing under on five occasions because it’s only managed to top 14 points twice.

It’s a typical day in the Pacific Northwest in October, with temperatures at 60 degrees at kickoff on a cloudy day. Wind will blow at just five miles per hour to the northwest.

I don’t really trust Oregon at all right now, but I trust Colorado even less. The Buffaloes only avoided being the most inept team in the Pac-12 because Arizona is truly a horror show, and Oregon should be able to do pretty much whatever it wants against the Buffaloes.
My only hesitation is that I’m not totally sold that Oregon scores 24 points, but I think the Ducks will get over that number in a game that looks like a 31-3 final. Give me the Ducks. This will probably be a GREAT game to live bet. New to live-in-game wagering? The absolute BEST platform can be found at Bovada Sportsbook. Why? They offer a bettable line almost 100% of the game. Other bookies only offer lines during commercial breaks and halftimes! You get a 50% bonus too! Click here to check’em out!