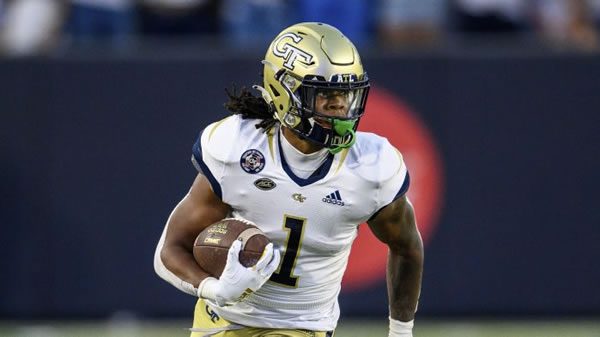 Notre Dame shoots to stay in the running for another invitation to the College Football Playoff when it hosts 3-7 Georgia Tech Saturday afternoon in South Bend. The Irish are perfect both straight up and against the spread since suffering their only loss of this season back in October. The Yellowjackets, on the other hand, lug a four-game losing skid into Saturday as they play out the string on another bowl-less season.

The Golden Domers are favored by better than two touchdowns in this spot; how are we playing this game with our free college football betting pick?

This week’s college football betting lines opened the Irish as 16-point favorites over the Ramblin’ Wreck, with an over/under of right around 59.5. Early betting action then bumped Notre Dame to -17.5.

The Yellowjackets are 3-7 on the season after losing at home to Boston College last Saturday 41-30. Georgia Tech fell behind 7-0 two minutes into the game, then went on a 21-0 run but trailed 28-21 at the half. The ‘Jackets later pulled to within 31-30 midway through the fourth quarter but gave up the last 10 points of the game and came up short ATS as two-point underdogs.

Georgia Tech got out-gained by the Eagles 505-343, ran the ball for 213 yards but gave up 195 yards on the ground, lost the turnover battle 2-1, and committed 95 yards worth of penalties.

The Yellowjackets have now been out-gained by each of their last six opponents and out-rushed by four of their previous six foes.

Unfortunately, with just three wins on the season and only two games left to play, Georgia Tech will miss a bowl for the third straight season.

The Irish, meanwhile, are 9-1 on the season after winning at Virginia last Saturday 28-3. Notre Dame led 7-0 after one quarter, 21-0 at the half, and 28-0 through three quarters, on its way toward the victory and the cover as a nine-point favorite.

Notre Dame has only out-gained three of its last eight opponents, but it’s also out-rushed four of its previous five foes. It’s also 5-0, both SU and ATS its last five times out, beating Virginia Tech, USC, North Carolina, Navy, and Virginia by an average score of 34-18.

At 9-1, with wins over Purdue and Wisconsin and that loss to Cincinnati, the Irish are ranked No. 6 in both this week’s major polls.

These two teams just met back in October of last season, a 31-13 Notre Dame victory in Atlanta. The Irish only allowed one meaningless Georgia Tech offensive touchdown that day but came up just short of covering the spread as 20-point favorites. Also, that game played under a total of 58.

Overs are 6-4 in Georgia Tech games this season, which are averaging 59 total points.

Totals are split 5-5 in Notre Dame games this season, which are averaging 53 points.

Most signs point toward the Irish here; they’ve got more to play for, they own the better defense, they own the better record against common opponents, and more. However, they’re also playing at home, where spreads are often inflated. Georgia Tech, meanwhile, is losing games but not getting blown out. They’ve lost four in a row, but they’ve been in each of those games. The Yellowjackets are also running the ball for 182 yards per game. So while we don’t see an outright upset here, we like Georgia Tech plus the points. Bet your Georgia Tech vs. Notre Dame pick and ALL your week 12 college football predictions for FREE by taking advantage of a 100% REAL CASH bonus on your first deposit of $100 to $300 at MyBookie Sportsbook! (Must use bonus code PREDICT100 in order to qualify for the special bonus). Click here to sign up now!