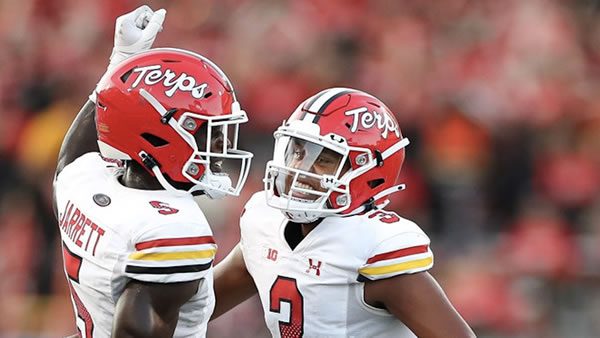 CFB betting odds: Mary -8/Ill +8 (Bovada - A must have for live betting! They’re platform is killer!)

Maryland and Illinois may be Big Ten conference rivals, but they’ll meet for just the second time ever Friday night in Champaign. The Terrapins are off to a 2-0 start in their third season under Coach Locksley, while the Illini are 1-2 in their first season under Coach Bielema.

Maryland’s favored by a long touchdown on the road for this one; let’s drive into how we’re betting this game!

Week 3’s college football betting lines opened Maryland at -7.5 over Illinois, with an over/under of around 59.5. Early betting action then bumped the Terps to -8.

The Terrapins are off to a 2-0 start to this season, both straight-up and against the spread after disposing of FCS Howard last week 62-0. Maryland, as it should against a poor FCS program, drove its first two possessions of the game 64 and 54 yards to touchdowns, led 38-0 at the half, then tacked on 24 points from there for the easy win and cover as a 47-point favorite.

The Terrapins returned 16 starters this season, eight on both sides of the ball, from a team that played 2-3 last year. While they probably won’t contend in the Big Ten East, we can see them making it back to a bowl.
The Illini, meanwhile, are 1-2 both SU and ATS after falling at Virginia last week 42-14. Illinois gave up touchdowns on the Cavaliers’ first two possessions of the game, trailed 21-7 at the half, pulled to within 21-14 early in the third quarter but faded from there, and whiffed ATS as a 10.5-point dog.

On the personnel front, Illinois lost starting QB Brandon Peters back in Week 1 to a shoulder injury, but it looks like he might come back and start Friday night. If he can’t go, Rutgers transfer Artur Sitkowski will make his third start for his new team and 18th overall.

These conference rivals (what a joke) have met just once before, a 63-33 Maryland victory in 2017.

The totals are 1-1-1 in Illinois games this season, which have averaged 58 total points against an average over/under of 54.

Maryland is the better team here, with people and systems in place, while Illinois is playing its fourth game under its new HC. Also, the Terps racked up almost 500 yards against what’s supposed to be a decent West Virginia defense, one that’s certainly better than the Illini’s. And Illinois has a question mark at QB. We’re taking the Terrapins here, minus the points. The weekend is coming! Double your bankroll with a 100% bonus on your first deposit of $50 to $300 at MyBookie when you use bonus/promo code PREDICT100 at MyBookie Sportsbook!