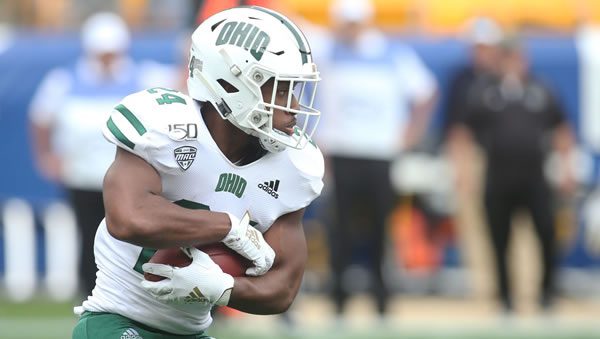 A pair of mid-majors who have mostly disappointed so far square off in the return game of a series that started in 2019. Louisiana was expected to pick up where it left off in 2020, but so far, the Cajuns have struggled to get their defense back to the levels it was at a year ago, giving up 62 points in two games so far. The passing attack is still moving the ball well, but the running game just isn’t what it was a season ago.

Ohio really has to hear the alarm bells ringing, as the Bobcats were drilled at home by Syracuse and lost by two to a Duquesne team that hadn’t faced an FBS opponent since losing by 48 to Massachusetts in 2018. The Bobcats seem to be heading in a more modern direction under Tim Albin, which hasn’t worked all that well so far. The running game didn’t do enough against Syracuse, and the run defense wasn’t good enough against Duquesne. Against a Louisiana squad that’s looking to get some positive momentum, the Bobcats are going to have to get things figured out in a hurry.
How the Public is Betting the Ohio/Louisiana Game

After a pair of unconvincing performances, the public has lost a fair amount of faith in Louisiana, as the Cajuns have just 40 percent of the tickets going into this game. The number hasn’t moved yet, but if this continues, the number is likely to move in the Bobcats’ direction. The total hasn’t changed at all.

More Picks: Get NFL Week 2 Thursday’s Against the Spread Bet >>>

The Bobcats have already thrown 53 passes in 2021, one fewer than the 54 they threw in three games in 2020. Ohio has never been a forward-thinking offense, preferring to grind it out and let their line and backs take care of the rest. Usually, it’s worked out pretty well, but without Frank Solich on the sidelines, after the longtime coach stepped away for health reasons, the Bobcats are off to a difficult start.

Getting De’Montre Tuggle more involved in the offense is a must, as the senior running back averaged 7.6 yards per carry in 2020 but hasn’t been much of a factor in 2021. Getting away from him was understandable against Syracuse once the Bobcats fell behind, but Tuggle only got seven touches against Duquesne in a back-and-forth contest. O’Shaan Allison is a capable back as well, and Ohio’s offense works best when both are getting their touches, not when they combine for just 19 carries for the entire game. If Ohio isn’t able to get both in the flow of the game, it’s difficult to see them getting a win.

Replacing Elijah Mitchell and Trey Ragas was never going to be easy, but it wasn’t supposed to be this difficult. So far, not only has Chris Smith not been the answer, but Louisiana hasn’t been able to either decide on a back or commit to the ground game. Levi Lewis and the pass game have more weapons than ever at their disposal, but they haven’t given any backs more than 11 carries in either game.

Even when they were trying to drain the clock against Nicholls State, Louisiana still couldn’t commit to any one back to keep feeding the ball. With no true No. 1 and nobody getting enough carries to establish themselves as even a 1A back, this is a team that’s trying to put the game in Lewis’ hands a little too much. Eventually, that might work out, but for the time being, this is a team that’s trying to find itself and match up to the hype they’ve built for themselves over the past two seasons. Having a target on their back is a new thing for Louisiana, and so far, it hasn’t adjusted well.

These teams have played a few times before, and there’s been one constant in their meetings: a lot of points. Two years ago, when the teams faced off in Athens, Louisiana put up 45 points in a 20-point victory over the Bobcats, and none of the three meetings between the teams have seen fewer than 54 points scored. Ohio’s very used to a lot of points being scored against Sun Belt teams, as the Bobcats have triggered the over in 10 of their past 11 games against Sun Belt members, with one push.

This could be a problem. Tropical Storm Nicholas is currently moving up the Gulf of Mexico and is likely to pound southern Louisiana up until a few hours before kickoff. The winds are likely to subside by kickoff as the storm moves northwest, but up to a quarter of an inch of rain could fall on Thursday alone. Temperatures are expected to hover in the mid to high 70s.

This one reads under, as both offenses are having problems moving the ball, and the remnants of Nicholas could force both of them — especially Louisiana — to keep the ball on the ground and keep the clock moving. Throw in that the Cajuns will probably use this game to try to improve the ground attack, and I’m not sure that there’s going to be a lot of points scored here.
With the Bobcats struggling to get any offense going, it’s tough to see Ohio keeping pace. This is a lot of points, but I’ll go with Louisiana to earn the cover. Question: If you had the opportunity to buy something (same exact item) for $110 or $105, which would you pay? THE LESSER ONE! OF COURSE! So why are you still wagering on games at -110 odds when you could be laying only -105? Stop overpaying today and get signed up at BetAnySports! Saving money is SMART!