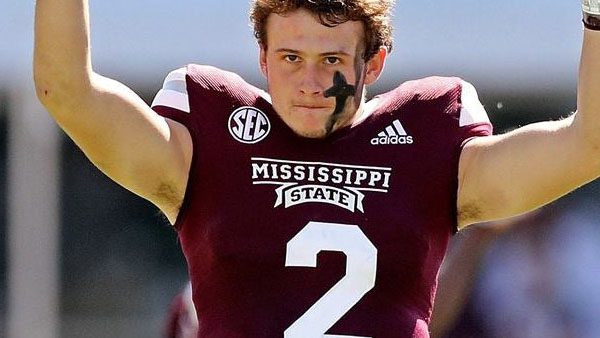 Point Spread: MISST +2.5/MISS -2.5 (Did you know that you could be wagering on games at -105 instead of -110? Imagine how much money this would save you! Start betting smarter today by making the switch to reduced juice betting at BetAnySports Sportsbook!)

For the 24th time in series history, the Mississippi State Bulldogs will meet the Ole Miss Rebels on Thanksgiving Day when both teams square off inside Vaught-Hemingway Stadium this Thursday. The Mississippi State vs Ole Miss rivalry, known more popularly as the Egg Bowl, has produced 118 prior meetings as one of the oldest rivalries in college football. The Rebels lead the all-time series at 64-45-6 SU and have won each of the past two years under Head Coach Lane Kiffen. When the rivalry renews on Thursday, the Rebels will be mere 2.5 point favorites in the Battle for the Golden Egg.

If this game happened a few weeks ago, the Rebels would have been much bigger favorites. However, Kiffen’s Rebels have lost 3 of their last 4 games including a surprising beatdown at the hands of Arkansas (42-27) just a week ago. Once true contenders in the SEC West, the Rebels are just trying to make it to the finish line and cap off another victory over the Bulldogs. Like Ole Miss, the Bulldogs have also dropped 3 of their last 4 games against SEC opponents despite getting a cupcake victory over East Tennessee State last week. Despite the downtrend, I think many would argue that this Mississippi State team has the talent and potential to pull off a victory this week to give Head Coach Mike Leach his first victory in the Egg Bowl.

While I hate to look at last week’s games, Arkansas laid the blueprint for Mississippi State this week. The Rebels’ defense has struggled tremendously against the run this season, allowing 167 yards per game. In last week’s embarrassing loss, Razorbacks RB Raheim Sanders ran wild for 232 yards and three touchdowns. Arkansas was able to control the pace of the game and seemingly move the football with ease which eradicated the Rebels’ offense high-tempo impact.

Obviously, the key to beating Ole Miss is to attack their inferior run defense and control the pace of the game. Unfortunately, Mike Leach’s style is anything but traditional in the SEC. Instead, the Bulldogs will attack with a heavy passing approach behind QB Will Rogers who has tossed 32 touchdowns and just five picks on the season. Leach’s offense is notorious for spreading the ball around and finding space within the defenses. Therefore, we should expect another heavy passing attack and game script that favors a lot of possessions on both sides of the football.

In that particular game script, I have to favor the Rebels based on talent and weapons on the offensive side of the football. In fact, the Rebels actually have the more potent rushing attack in this match-up behind the duo of Quinshon Judkins and Zach Evans, who have combined for nearly 2,300 yards rushing and 24 touchdowns. Perhaps, more importantly, is the fact that Mississippi State’s defense has likewise struggled to stop the run, relinquishing 150 yards per game on the ground. Therefore, I think the Rebels will have success early and often running the football. As long as QB Jaxson Dart limits the mistakes, I think the match-up favors Ole Miss at home, where they have won 14 of the last 15 games.

I think the over is definitely worth a look, as both offenses will be in attack mode for all 60 minutes. However, the play here is with the Rebels, who should have a big advantage on the ground and should be able to control the game flow.
Jay’s Pick: Take Ole Miss -2.5