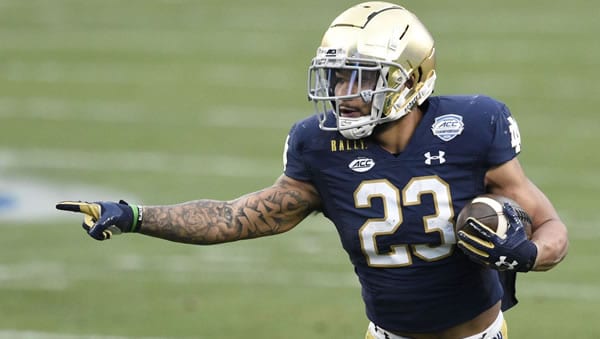 With the college football season now just weeks away from starting, total wins odds have begun to solidify, and below, you will find my over/under pick for the Notre Dame Fighting Irish 2021 season with odds provided by Bovada.

Ian Book left Notre Dame as the winningest quarterback in school history, but there might not be as big of a step down as expected with Wisconsin grad transfer Jack Coan taking over at the position. The former Badger threw for an efficient 18 touchdowns compared to just five interceptions while leading his team to the Rose Bowl and a spot in the Big 10 Championship Game back in 2019 and will hope to rekindle that sort of success in South Bend. Coan was able to find balance in the passing game that season with Wisconsin thanks to a strong running back counterpart in Jonathan Taylor and seems in line to benefit from a similar situation this year with Kyren Williams leading the way for the Irish backfield.

Book may have gotten some Heisman votes last season, but the true star of the offense was Kyren Williams. The multi-dimensional running back ran for 1,125 yards while averaging 5.3 ypc, scoring 14 total touchdowns and also posting 35 receptions for 313 yards through the air. He will undoubtedly be the offense’s focal point in 2021, with speedster Chris Tyree a competent backup and counterpart to Williams. Unfortunately for both Williams, Tyree, and Coan, the biggest loss to the offense was upfront on the line, where four starters are gone. The only returning one (Jarrett Patterson) not only has to change positions from center to left tackle but also has an injured foot and was unable to take part in spring practice.

Who will step up at wide receiver will be one of the most important storylines for Notre Dame this season, as they lost a majority of the production at the position with Javon McKinley and Ben Skowronek having moved on after leading all team wideouts in receptions, yards, and touchdowns in 2020. Avery Davis, Lawrence Keys III, Brandon Lenzy, Kevin Austin, Jordan Johnson, and Joe Wilkins make up the core of the position for this season, though who will be the official starters to begin the year remains to be seen.

Thankfully future star in the making, tight end Michael Mayer, is back after posting 45 receptions for 450 yards in his initial season, and with plenty of targets now available, will certainly have the opportunity to make the jump to the next level this season.

BET YOUR FUTURES PICKS FREE BY SCORING A 100% BONUS ON YOUR FIRST DEPOSIT UP TO $300 AT MYBOOKIE SPORTSBOOK! (BONUS CODE: PREDICT100)

The Irish defense lost two of their best players to the NFL Draft in Jeremiah Owusu-Koramoah and Adetokunbo Ogundeji, but their most significant departure was likely defensive coordinator Clark Lea, who left South Bend to take over the head coaching duties at Vanderbilt. Taking over Lea’s position will be former Cincinnati coordinator Marcus Freeman, who, based on his success with the Bearcats, is plenty qualified to fill Lea’s shoes, and thankfully for Freeman, he will not be starting his Irish tenure shorthanded. Safety Kyle Hamilton is back for his junior season after leading the team in tackles in 2020 and is undoubtedly the field leader of the defense. Amongst those expected to make an impact along with Hamilton include Myron Tagovailoa-Amosa and Isaiah Foskey up front and linebackers Drew White and Bo Bauer in the middle.

The Irish schedule has some advantages, especially with just four true road games, all of which are against teams that aren’t going to be ranked to start the year, and also four games at home versus teams that aren’t expected to begin the year in the top 50. Unfortunately, with closer inspection, you begin to see a number of possible pitfalls. Their four true road games are against Florida State, Virginia Tech, Stanford, and Virginia, all of whom have a history of success and a much-proven ability to pull an upset, but it’s the remaining four that are the real issue. A neutral site battle against Wisconsin, matchups against top 10 North Carolina and Cincinnati, along with their annual rivalry game with USC, await Notre Dame in the middle of the year. They will be a definite disadvantage starting with the Badgers game, as that will be the first of six teams (followed by Cinci, VT, USC, UNC, and UVA) that Notre Dame encounters on their schedule that will be coming off of a bye week, and thus will have the added advantage of having the additional time to prepare and strategize for playing the Irish.

I don’t believe the drop off at quarterback from Book to Coan will be as bad as some think, but I do believe that the challenging schedule along with personnel losses on the offensive line, wide receiver, and on the defense both on the sidelines and the field will be too much for Notre Dame to overcome in their attempt to make it five straight seasons with double-digit wins. Brian Kelly has historically struggled against top-tier teams, and I believe that trend is likely to continue this year and will be taking Notre Dame to go under their expected win total of nine games. Note: I specialize in making Notre Dame point spread predictions each week of the season. Please bookmark this page and follow me all season here: Predictem College Football Picks Page.